10 Most Corrupt Leaders around the Globe 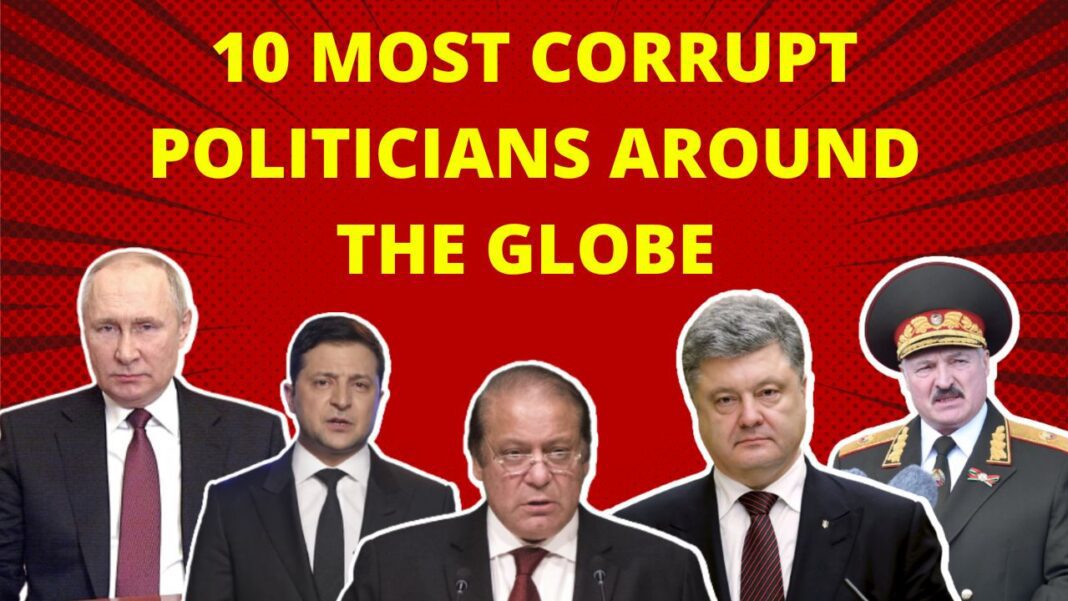 Transparency International claims that exposing corruption “can only happen if we understand how it works and the systems that enable it.” Transparency International says corruption “erodes trust, weakens democracy, hampers economic development, and further exacerbates inequality, poverty, social division, and the environmental crisis.” In this article, we will mention the ten most corrupt leaders in the world.

Top 10 Corrupt Leaders around the Globe

Without a doubt, Suharto deserves to be at the top of this list of the most dishonest politicians. From 1967 to 1998, he served as Indonesia’s president. In 1965, he was appointed army chief.

He had served in the war of independence. He disapproved of Sukarno’s pro-Chinese policies when he was president. After putting down a coup in 1965, he proceeded to succeed Sukarno in 1967.

Suharto and his family were accused of utilizing their position of authority to benefit themselves and their families by taking advantage of charities, misusing funds, and obtaining bribes through various commercial deals.

How can Pakistani politicians escape the list when it’s about top corrupt leaders? They always maintain their legacy. So is the case with Asif Ali Zardari, who held presidential office from 2008 to 2013. Zardari has many allegations of corruption and misuse of power, including the charge of the murder of Benazir Bhutto, among many others.

He is one of the richest men in Pakistan and is also known as Mr. 10 Percent. He owns limitless land in Sindh, mostly owing to illegitimate occupation and extortion.

Yet, he remains powerful and clean in politics, and courts have failed to punish him due to his influence over the bureaucracy, judiciary, and establishment.

Mr. Putin, the president of the Russian Federation, avoids mention in a video of his pals and people like him. Allegedly, Putin owns a wealth of 200 billion dollars.

He owns a 700-million-dollar yacht, 58 planes, and several luxury items worth millions. But we must be careful about the figures of wealth he owns because these are either rough estimates or reports compiled by Western media. However, one thing is certain. Mr. Putin does own a humungous amount of property and wealth.

Nawaz Sharif aka Bao Jee, who held the prime power chair of Pakistan three times, is a must-mention. According to some reports, he is ranked as the most corrupt leaders of contemporary times, especially after the release of the Panama Papers. His publicly disclosed net worth is around Rs 150 billion (US$1.4 billion).

He and his family own many real estate properties, steel mills, factories, rice mills, flour mills, and sugar mills all over the country and abroad. According to the Panama Papers, Nawaz Sharif and his family engaged in a high level of corruption with $418 million.

Petro Poroshenko was the former president of Ukraine. It is known as the destroyer of Ukraine’s economy. According to the Ukraine Accountability Bureau, he looted more than $3 billion.

Ukrainian officials have also named former president Petro Poroshenko as a suspect in a treason investigation, accusing him of having helped pro-Russian separatists sell coal to Kyiv. During his 2014–2019 presidency, Poroshenko helped the self-proclaimed Donetsk and Lugansk People’s Republics sell some 1.5 billion hryvnias ($54 million) worth of coal to Kyiv.

He was the youngest serving PM of Iceland. But he was found guilty in the Panama Papers of having multiple offshore accounts with his wife. He resigned after the leaks. One of the first major names discovered in the data was that of Iceland’s former prime minister, Sigmundur Davíð Gunnlaugsson.

He failed to disclose his ownership of an offshore company when he became a member of parliament amid the country’s banking crisis. The controversy centered around a company in the British Virgin Islands.

Which the prime minister and his wife, Anna Sigurlaug Palsdottir, purchased in 2007 from Mossack Fonseca, the Panama law firm from which thousands of documents were leaked. he is ranked as the most corrupt leaders.

David Cameron involvement in extramarital affairs and his urge to get super rich speak to his involvement in Greensill Capital, given he reportedly made up to $10m (£7m).

After BBC Panorama reported on the sum, he made a part-time job over two and a half years. The former prime minister was forced to disclose what he knew about the company’s financial troubles before it collapsed this year.

Ghani Baba deserves to be on this list. During his nearly seven years in power, Ghani found ways to enrich his brother, his brother-in-law, and other members of his inner circle. The Afghan president’s office had approved unique extralegal rights for the subsidiary of an American military contractor to purchase, process, and sell the metal chromite from local Afghan mines.

Normally, buying from these types of mines was prohibited because it risked funding groups like the Taliban and the Islamic State’s Afghan affiliate. But this subsidiary was special. Secret documents obtained from the United Arab Emirates, where Ghani fled after being deposed, show that his brother, Hashmat Ghani, owned 20 percent of the military contractor’s subsidiary that had won these rights.

Lukashenko, who has been in power since 1994, has generated headlines over the past year for channeling state money to a series of oligarchs close to the Lukashenko family.

By intercepting a Ryanair passenger plane carrying a Belarusian dissident and forcing it to land in Minsk in violation of international laws on aviation. Creating a border crisis with the European Union by luring thousands of refugees to the borders of the bloc and promulgating misinformation and fake cures for COVID Lukashenko enjoys unlimited power at home and sniffs at international opprobrium. Indeed, EU sanctions against his country prompted his retaliation via refugees.

Ukrainian President Volodymyr Zelensky rode to power on pledges to clean up the Eastern European country. Still, the Pandora Papers reveal that he and his close circle were the beneficiaries of a network of offshore companies, including some that owned expensive London property.

Ukrainian President Volodymyr Zelensky and his partners in comedy production owned a network of offshore companies related to their business based in the British Virgin Islands, Cyprus, and Belize. Zelensky’s current chief of staff, Serhiy Shafir, and the head of the country’s Security Service were part of the offshore network. He is ranked as the most corrupt leaders of current times.

You may be interested in: Russia and Ukraine – World Near Full Military Conflict

Shafir and another business partner used offshore companies to buy pricey London real estate. Around the time of his 2019 election, Zelensky handed over his shares in a key offshore company to Shafir. Still, the two appear to have arranged for Zelensky’s family to continue receiving money from offshore.

These are the ten most dishonest politicians of the twenty-first century. Do you all realize how corrupt and power-hungry they are? These politicians, however, were utterly dishonest and cheated the individuals who needed help the most.

They stole from their citizens to better their lifestyles. No one should ever look up to these dreadful people because they are a human shame.