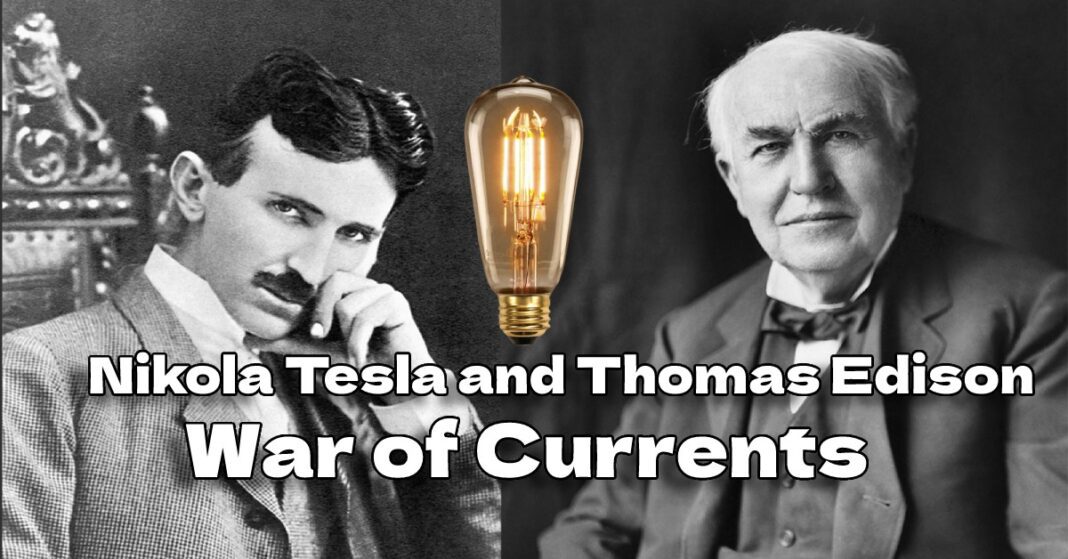 Nikola Tesla and Thomas Edison are two titans of electrical engineering whose innovations transformed history. It’s no secret that these two spark off each other.

Nikola Tesla made it possible for us to witness and use alternating current (AC) electric system. AC current is the foundation stone of most AC gadgets. The use of AC current is very wide and it illuminates the whole world.

Born on July 10, 1856, Nikola Tesla travelled to the United States in 1884 and briefly worked with Thomas Edison before the two split ways.

In the 1880s, the world witnessed a ‘War of Currents.’ This war was not between two countries. Rather, this war was between two individuals. It was between two contrasting ideologies that never settled. Edison invented countless electrical gadgets that helped humanity immensely. However, Tesla managed to put forward a better power communication system.

Nikola Tesla landed in the United States in 1884 with just the clothes on his back and a letter of introduction to the wealthy and famous scientist Thomas Edison. Edison’s DC-electrical works were swiftly becoming the nationwide norm. Thomas Edison had recruited Nikola Tesla, and the two men worked tirelessly together to enhance Edison’s creations.

In spite of this initial success, Tesla and Edison eventually broke up due to their contrasting approaches to commerce and science, which historians have ascribed to their wildly dissimilar characters. Tesla was not business savvy and was more susceptible than the powerful Edison, who was more concerned with marketing and financial success.

After Tesla and Edison’s breakup in 1885, Tesla was able to get money for his Tesla Electric Light Company. His sponsors tasked him with perfecting arc lighting. Tesla fulfilled the task. But they pushed Tesla out of the electrical market. He had to live in miserable conditions. He worked as a manual worker to meet his ends.

In 1887, however, things began to look up for him as interest in his AC electrical system grew and investors began pouring money into his fledgling Tesla Electric Company. Tesla had submitted multiple patents for his AC-based ideas before the year’s end.

What was the conflict between Tesla and Edison?

Many more American communities gained access to Edison’s incandescent lighting with the switch to DC electricity. However, there was a major flaw in its expanding sphere of influence: at the time, direct current energy could only be transmitted over short distances. So, other innovators kept working on what they termed alternating current (AC), which made voltage modulation with transformers a breeze.

Tesla was among those who hedged their bets on alternating current (AC). On a stroll with a buddy in 1882 while working at Edison’s Parisian outpost, Tesla had an epiphany that solved an engineering problem that had been bothering him for some time. As Tesla conceived the workings of an AC-generating motor, his ability to see full complicated mathematical formulae and engineering achievements proved useful.

However, financial worries wouldn’t last very long. On his travels, Tesla met the man who would later hire the immigrant inventor to work at his Edison Machine Works on the Lower East Side of Manhattan. A favorable reference letter from his previous employer helped his case.

Tesla, in an interview years after the fact, recalled the complete intimidation by his new superior at the moment. Tesla said, “This great guy astounded me. He astounded me with his great work in so little time.”

During his tenure at Edison Machine Works, Nikola Tesla worked on a project. This project illuminated a boat named Oregon electrical power. Tesla worked on its circuits and assembles DC generators. Tesla stated in an interview from 1921 that Edison had praised him a “damn good guy” after he quickly fixed the lighting system aboard the Oregon.

The Serbian inventor was also assigned with building an arc lighting system, but his employment of AC power was of little interest to Edison, who had a wealth invested in DC power and did not want to lose his loyalty.

Later, Tesla would allegedly say that Edison himself pledged a large sum to enhance on the DC system, then withdrew the offer when Tesla introduced him with his work, asserting that he “did not understand American humor,” enraging Tesla to the point that he lashed out and set out on his own, ascertained to spite the elder inventor.

Tesla only worked for Edison for around six months, and after a period spent digging graves, he gathered enough investor finance to establish up his own firm in Rahway, New Jersey, adjacent to Menlo Park. After his firm was taken from him by investors, Tesla was unable to develop his AC motor until he opened a new facility in Manhattan in 1887.

In the spring of 1888, he was granted seven patents for different aspects of the machine, indicating that his mastery of its workings was imminent. Soon after, his primary competitor in the battle to provide cities with power—George Westinghouse—was granted licenses to exploit those inventions.

Eventually, the competition between AC and DC would heat up, with Edison going to great lengths to denigrate AC (despite the fact that he had nothing to do with Topsy the elephant’s infamous death by electrocution).

While Edison had little to do with Tesla’s financial situation in his later years, he did die virtually broke. Despite having amassed a fortune thanks to his agreements with Westinghouse, he squandered it all on doomed investments, commercial ventures, and ambitious projects.

Tesla’s tremendous career, which included much more than AC power inventions, has only recently been recognized as the source of his putative rivalry with Edison.

Who was Better Nikola Tesla or Thomas Edison?

Tesla’s memory was eidetic, meaning he could remember anything. Because of his exceptional memory, he was able to form an accurate mental representation of complex 3D things, allowing him to construct prototypes from a small number of sketches.

Instead, Edison was more of a repairman and sketch artist. Finally, Edison had 1,093 patents around the globe, whereas Tesla had less than 300. Naturally, Edison had a staff working with him to develop ideas for inventions, and he also purchased patents.

Edison dismissed Tesla’s alternating current (AC) technology of electrical power transmission as “impractical,” advocating instead for his own simpler, less efficient direct current (DC) approach. Contrarily, Tesla’s innovations tended to be less organized and based on technology for which there was little to no consumer demand.

His alternating-current engine and the world’s first hydroelectric facility at Niagara Falls revolutionized electricity worldwide. Tesla spent a great deal of time developing a wireless transmission system for audio, video, and data. He was a futurist because of his thoughts. The Tesla Coil, which he went on to create and patent, is still in use in radios, telephones, mobile phones, and TVs today.

Edison’s innovation factories, where hordes of people performed chores and created inventions, are largely responsible for his lasting impact. Whenever Edison had a concept, he would delegate most of the testing to his subordinates.

Edison guaranteed a steady, substantial income supply to his helpers by having many patents and innovations developing in simultaneously, allowing them to continue doing tests and fleshing out further concepts.

Despite the fact that Tesla’s innovations underpin today’s electricity and communication infrastructures, he was mostly forgotten by the end of the 20th century. While he was a prolific inventor and patent holder, he passed away in 1943 as a lovable eccentric and penniless.