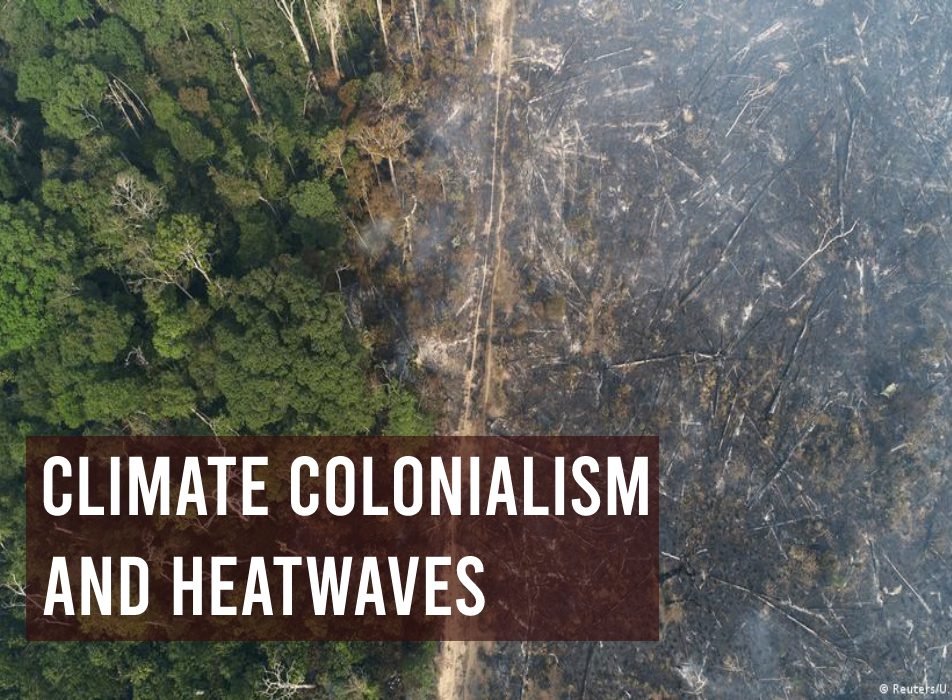 Colonialism ,the policy of acquiring full or partial political control over another country, occupying it with settlers, and exploiting its economically was said to be ended in 20th century. But the reign of exploitation has yet to end.

This resulted in not only deforestation, drought, loss of land by indigenous people, human rights violations, and increase carbon emissions and degradation of land due to overproduction. Major countries in the Global North import large amount of crops and meat from the global south which caused increased deforestation, land destruction and human displacement.

The Amazon rainforest, the largest forest full of ecosystem and essential for global climate regulation had had 43,000 acres of land cleared and burned in 2021 to support the supplies of logistics and to clear land for livestock breeding. Between 2001 to 2019 2.7millon acres of land were destroyed.

Much of the wood and meat produced in Brazil ended up in Global North markets. Same is the case in the Palm oil industry mostly operating in three countries of Southeast Asia: Indonesia, Malaysia and New Guinea.

Between 2018 and 2020,500,000 acres of rainforest are cleared to support the Palm industry to meet the high demand for oil by food brands in Global North ( Palm oil accounts for global 2-3% deforestation).

Meanwhile, the push for green sources of energy has increased the demand for metals like Cobalt, Nickel and lithium, and this again had put the burden on the shoulders of poor countries in the Global South.  The mining of these metals involved human rights violations faced by labourers working in mines. According to data by a London based NGO,304 complaints of human rights violations were received.

Many countries in Global South account for 0.008% of Global Carbon Emission, as the 3.5 billion population is responsible for only 10% of emission. These countries and MNCs not only increased the carbon emission in these countries but also caused heat waves, drought, and floods due to the melting of glaciers. These countries also lack the resources to tackle the threats posed by Climate Change.

The increased pressure has invented a new way of tackling the issue i.e. Carbon Offsetting a reduction or removal of emissions of carbon dioxide or other greenhouse gases made to compensate for emissions made elsewhere.

This included the plantation of trees and a shift to Green Energy sources. But this also hadn’t spared poor counties in the Global South from exploitation. For Example: In 2014 Norwegian companies caused the forced migration of thousands of indigenous people in Uganda, Tanzania and Mozambique to spare land for Tree Plantation and development projects to build Green Energy plants.

Under the Paris agreement, countries in Global North pledged to reduce their annual carbon emission. The fossil fuels which account for 86% of carbon emissions include coal and natural gas.

Many countries like China and Germany banned the use of hard coal in their countries but they did not ban the import of coal to other countries in Global South and also they continued sponsoring the development projects in these countries which use coal as a source of energy.

Across the globe, hot days are getting hotter and more frequent, while we’re experiencing fewer cold days. The frequency of heatwaves, a prolonged period of abnormal hot weather, is increasing especially in countries in Global South due to continuously changing climatic conditions over the Globe.

It is said that the frequency of heatwaves would be double or in some areas tripled in upcoming areas. These heat waves caused many problems like drought, dry and hot weather, water scarcity, increased melting of glaciers and children’s diseases, the most vulnerable section of the country.

While the effects of heat may be exacerbated in cities, due to the urban heat island (UHI) effect, the livelihoods and wellbeing of non-urban communities can also be severely disrupted during and after periods of unusually hot weather.

Lack of basic necessities, harsh working conditions, lack of better medical facilities and low wages had made these countries more vulnerable to Heat Waves. This is also an effect of Climate Colonialism which had made the earth hell to live in.

Conclusively, the changing climate has once again put the burden on developing countries. With least role in polluting the environment, due to lack of industries and low use of fossil fuel, these countries become the home of exploitation by the wealthy countries and MNCs continuously engaged in activities which are aimed at extraction of resources demanded by consumers in Global North.

This has not only polluted the environment in Global South through deforestation, land degradation, use of fossil fuel but also resulted in severe human rights violation by increasing human displacement, poverty, water scarcity ,outbreak of diseases and frequent heatwaves hitting countries all over the world.

These countries while lacking in resources to deal the emerging issues becoming dependent on these wealthy countries and international monetary institutions for aid.