The Post-US withdrawal Afghanistan: What next for the region? 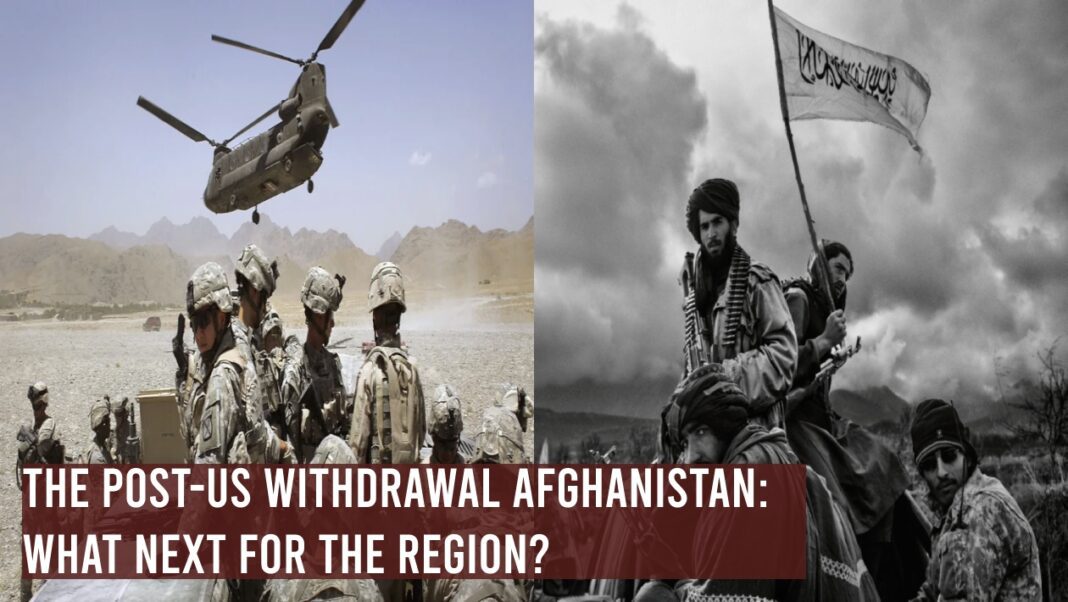 However if Afghanistan remains unstable, then terrorism, refugees influx, and drug trafficking could perturb regional stability. Here the concerns of regional countries is discussed one by one.

Russia is intended to fill power vacuum in Afghanistan created after the US withdrawal for regional security  and strategic partnership. It is trying to expand its political outreach to the Taliban through bilateral and trilateral agreements to undermine US interests in this region. The primary concerns of Russia are its security and of its allies, the Central Asian states.

For it, Russia did military exercises in Central Asian states in August 2021 to give a signal to the Taliban that never rush towards its backyard. Terrorism emanating from Afghanistan can be a threat to the whole region. As terrorists or refugees can even go to Russia via bordering the Central Asian States.

President Putin hoped that the Taliban would ensure stability in Afghanistan and said, “It’s important not to allow terrorists to spill into neighbouring countries.”

Chinese concerns remain, d minimal during twenty years of the US war in Afghanistan. However, it had remained sceptical about the US troops in Afghanistan as it considered them establishing a foothold in the heart of the pull-out continent of China. Beijing was pleased over the miserable US pull out from Afghanistan.

Presently, Beijing is interested in the stability of Afghanistan so that no militancy should spread from Afghanistan because it could damage Chinese investment in projects like CPEC. Secondly is urging the Taliban to deny havens for Uyghur that are running East Turkistan Islamic Movement ETIM in Xinjiang province. China is interested to use Afghanistan as a  regional hotspot for extension of belt and road initiative.

India established encouraging diplomatic relations with the Afghan government after the US invasion of Afghanistan.  It is the  largest regional donor  to Afghanistan and has invested 3 billion dollars in different infrastructure and  development projects. After the US withdrawal from Afghanistan  it closed its embassy in Kabul on August, 2021 with the Taliban advance because Indian interests were closely connected with the US presence in Afghanistan.

India has now no longer present on the ground in Afghanistan. It can not exploit linguistic and ethnic differences in Afghanistan now to perturb  Pakistan from the western border. India has lost its leverage in Afghanistan. Currently, New Delhi is trying to establish good ties with the Taliban to secure its economic investment and trade because the Afghanistan market is a consumer of Indian pharmaceutical and agricultural products. It is sending aid to Afghanistan via Pakistan to create its soft image in the Taliban governed Afghanistan.

Pakistan has always quested for a friendly government in Afghanistan to undermine Indian interests. Afghanistan has remained a strategic depth for Pakistan. For this, its role has always been to remain active. Simultaneously, Pakistan supported the U.S. in the war on terror and inherently supported the Taliban (a perceived strategic asset of Pakistan) by giving them logistical support.

Pakistan’s biggest gain in Afghanistan after the Taliban advance is that India would lose its sway in Afghanistan. It could now have unrestricted trade routes in Central Asian states.  But Pakistan is also mindful of the fact that the Taliban led Afghanistan has emboldened domestic terrorist groups. It has concerned about terrorist  groups like ISIS and TTP.

There should not be infiltration of the above-mentioned terrorist groups and refugees from the western border because Pakistan now lacks the capacity for further Afghan refugees. Pakistan is also having border clashes with the local Taliban on fencing issues but the upper echelons of the Taliban have pledged to resolve border issues diplomatically with Islamabad.

Iran was pleased over the US failure in Afghanistan because America was the common enemy of Iran and the Taliban. In the post-US withdrawal from Afghanistan, Iran wishes to have friendly relations with the Taliban to safeguard Hazara Shia community rights. Due to the US sanctions, it wanted to continue trade with Afghanistan.

Iran became the biggest trading partner of  Afghanistan in 2018 with export of about 2 billion dollars.  Chinese-Iran investment deal of 400bn dollars in September 2021 could increase cooperation of both countries in Afghanistan. Iran shares a border of 921 km with Afghanistan. It has concerns about militancy operating from Afghanistan threatening its security concerns in bordering regions of Khorasan and Sistan.

Central Asian States shared the  US concerns about the eradication of terrorism during the war on terror because these countries were also suffering from militancy from terrorist groups like the Islamic Movement of Uzbekistan IMU. After the US withdrawal the bordering states Uzbekistan, Tajikistan, and Turkmenistan have fortified their borders to avoid the influx of refugees or infiltration of terrorists.

These states also want access to the global south Asia market through Afghanistan for projects like  TAPI and CASA-1000 for which a stable Afghanistan is imperative.

Regional cooperation is required to fix the humanitarian crisis and economic crisis in Afghanistan. Socioeconomic uplifting can end militancy in Afghanistan. Only a stable Afghanistan can ensure regional stability.