The Russian conflict with Ukraine: From Crime to Present-border tension 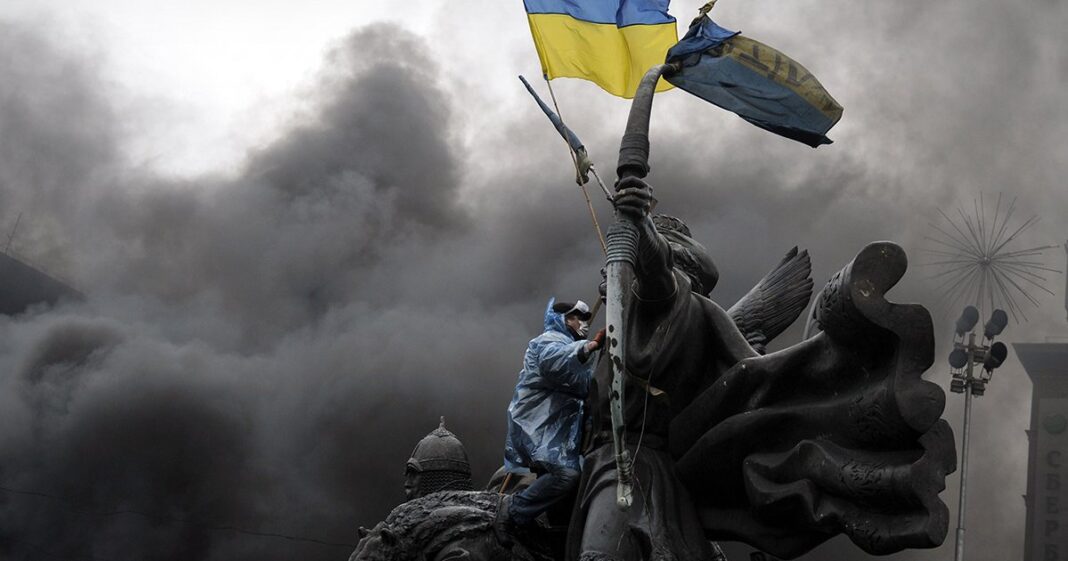 According to Washington, Russia has gathered more than 100,000 Russian soldiers on the border with Ukraine and in the annexed Crimea in recent weeks. This has created fears in the West and Kyiv that Kremlin may start a new war with its neighbors and former province that broke away with it in late 1991. A top Ukrainian military official expressed his fears and told Aljazeera that Russia could invade Ukraine as early as January, giving way to a “brief and victorious” war.

Whereas Russia denied any such allegations. It says that any of its actions are defensive, and it can move its troops wherever it wants. President Vladimir Putin and Russian officials warned NATO against expanding eastwards. However, Putin has repeatedly stated that Russians and Ukrainians are “one people”. They are part of Russian Civilisation, including Belarus.

So, the questions arise: what leads to the present-border tensions? What are the causes of the Russian conflict with Ukraine? Why Russia Ukraine war is still underway? What does Russia want? What are its official demands?

Ukraine was part of the former Soviet Union. With the dissolution of the Soviet Union, it became independent in late 1991. The Russian conflict with Ukraine can be traced back to a time when Ukraine started to move away from its imperial legacy and began to incline towards Western powers.

The Russia Ukraine war is continuing and protracted conflict between Russia and Ukraine. Ukraine Vs Russia crisis started in 2014. The pro-Moscow president of Ukraine, Viktor Yanukovych’s rejected a deal with the European Union for greater Economic integration. As a result, protests started in Ukraine against this decision. Ukrainian state began a violent crackdown against the protesters and unintentionally attracted more and more protesters. Thus, President Viktor was forced to flee the country in November 2014. In response to this situation, Russia sent its troops on Ukraine`s soil and annexed Ukraine`s the Crimean Peninsula. President Putin justified Russian troops in Ukraine and Crimean annexation as a need to protect the rights of Russian citizens and Russian speakers in Crimea and Southeast Ukraine. Since then, the Russia Ukraine war started and is still going on.

Tensions heightened between Ukraine and Russia when Malaysian Airlines was shot down over Ukrainian airspace. Investigations later concluded the Russian involvement in the incident. In 2015, France and Germany tried to reach a peace deal between Russia and Ukraine through Minsk Accords. The accords included the terms for the ceasefire, withdrawal of heavy machinery, and complete control of the Ukrainian government over the conflict zone. But efforts to reach any political settlement between Ukraine and Russia remained unsuccessful.

In 2016, NATO announced to install its troops in rotation in Eastern European countries including Estonia, Latvia, Lithuania, and Poland to deter any possible future aggression of Russia in Eastern Europe and especially in the Baltics.

Ukraine has been under several cyber-attacks since the conflict started in 2014. In December 2015, it suffered a great power loss. Similarly, a power blackout was observed in December 2016. In 2017 government and businesses’ computer systems were hit by the Net Petya cyberattack. This attack that is attributed to Russia caused billions of dollars of damage.

Since the beginning of this year, the Russian conflict with Ukraine has gotten worse due to the increase in the number of Russian troops in Ukraine and greater seize-fire violations.

Causes of the current crisis

The reason behind Crimean annexation by Russia and present-border tension lies in Ukraine`s desire to join NATO. In 2008, the then Secretary general of NATO and other members welcomed the Ukraine and Georgia`s aspirations to get membership in NATO. They also praised the efforts of both countries in the operations of the Alliance. Ukraine`s membership in NATO is not acceptable for Russia. Russia can`t stand the western powers and Americans gaining a strong military foothold in eastern Europe, especially the countries that border with Russia. This lies in the historical fears of invasions from western powers that are manifested in Napoleon’s invasion and Germany`s invasion in World War 1 and World War 2. After the Cold War, NATO has been expanding to Eastern Europe. The military foothold of the West in Eastern Europe poses a direct threat to the security interests of Russia.

Not only NATO`s membership but Western powers are trying to give European Union`s membership to East European countries. The presence of NATO and Western powers in Eastern Europe is likely to get a reaction from Russia if it is not in discussion with the Russian leadership. The current amassing of Russian soldiers in the borders with Ukraine is a reaction to NATO`s expansion in Europe. 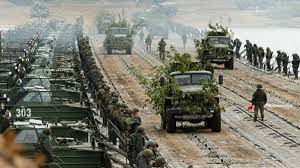 Some western scholars also say that Putin has in mind in reviving the glory of Russia. When Ukraine was part of Russia it was called ‘Malorossiya’ or ‘Little Russia’. From the 18th century, Czarist policies suppressed the use of the Ukrainian language and culture. These policies aimed to establish a dominant Russia and later strip Ukraine of an identity as an independent, sovereign nation. Russia is playing a similar type of tactic to underplay Ukraine`s independence in the 21st century. On one occasion in 2008 Putin`s then spokesperson asserted that “Ukraine is not a state”. Recently, Putin wrote an article claiming Russians and Ukrainians ‘one people-a single whole’. This concept is taken from the history of ‘Kyivan Rus’. It was a medieval federation that incorporated parts of modern-day Ukraine, Russia, and present-day Ukraine`s capital, Kyiv as its center. Lately, the remembrance of Kyivan Rus’ history in Russia has gained considerable importance. A 52-foot statue of Prince Vladimir of Kyiv, who is considered a saintly ruler by both Russians and Ukrainians was disclosed in Moscow in 2016. This statue caused distress among Ukrainians. To some, placing the huge statue of Vladimir in the center of Moscow displayed Russia`s attempt to own Ukraine`s history. It came two years after the Crimean annexation by Russia in 2014.

Recently, Russia`s foreign ministry issued a list of demands for NATO countries. The foreign ministry handed the list to the visiting US diplomat Karen Donfried. Putin repeated that the talks between US and NATO on International legal guarantees for Russia should begin ‘immediately’. One of the demands on the list includes the pledge of NATO countries to not give its membership to Ukraine. Russia also asked NATO to limit its military activities in Ukraine, Eastern Europe, the Caucasus, and Central Asia. It urged NATO to limit its troop`s deployment and weapons in Eastern Europe it asked for the returning of NATO forces to where they were stationed before 1997. NATO must not expand towards the East especially to those states that border with Russia. Russia`s area of interest is in the Black Sea and Baltic Sea. It asked that the maximum distance of ships should be maintained in the Black Sea and Baltic Sea. 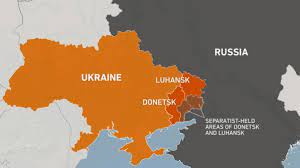 Russia also insisted on reviving Intermediate-Range Nuclear Forces Treaty. The INF treaty bans the deployment of nuclear and conventional ground-launched ballistic and cruise missiles with ranges of 500 to 5,500 kilometers to both the United States and previously called the Soviet Union. The Trump administration withdraw from this treaty in 2019. Russian`s fear that Americans might start installing weapons within this range. So, it demanded Biden administration reinvigorate that treaty. Moscow also said that if its demands are ignored, it would lead to a ‘military response’ similar to the Cuban missile crisis in 1962.

The demands of Russia are likely to get a negative response from NATO and the European countries, as US officials said that Kremlin knows some of its demands were “unacceptable”. Also, NATO`s head Jen Stoltenberg already dismissed any agreement that denies Ukraine from getting membership in NATO. He said that it depends on thirty NATO countries whether to give Ukraine membership or not.

In response to the demands of Russia, the White House Press Secretary told the reporters that ‘There will be no talks on European security without our European allies and partners”. Psaki said that the US had seen the proposals and was speaking with its European allies. Sergei Ryabkov, Russia`s deputy foreign minister responded that there was no time limit for talks, but that Russia wants to start negotiations “without delays and without stalling”.

Europe also showed its concern over the military build-up of Russia on its border with Ukraine. The leaders of the European Union threatened ‘massive consequences’ in case of ‘further aggression’. As efforts to find a solution to the current deadlock continue, German regulators, announced that a decision on whether to authorize the controversial Nord Stream 2 gas pipeline from Russia to Germany will not be made until July 2022. Some European Leaders have suggested blocking the pipeline as part of potential sanctions against Russia.

Ryabkov warned that Russia would act “militarily” if the Western military bloc did not guarantee the end of its eastward expansion.

Many experts including experts based in Russia have argued that the West is unlikely to accept the demands. Mathew Rojansky director of the Wilson Center’s Kennan Institute in Washington told The Moscow Times that the West has been very clear to Russia that any further aggression against Ukraine or any other state will not be tolerated and will be met with an unprecedented response.” Dmitry Trenin, director of the Carnegie Moscow Center, tweeted shortly after Russia published its demands and expressed doubts on the acceptance of demands by the West on the security of Russia. Russia will have to ensure its security on its own, most likely by technical military means, he said.

Arguably, it can be said that the West may not accept all of Russia`s demands, but this proposal could lead to difficult but important negotiations.

If this conflict escalates?

If this crisis worsens, there will be a greater chance of direct war. If Russia invades Ukraine, then it will not only be Ukraine VS Russia, but it will involve other European states as well. This could have a domino effect and may trigger other conflicts in the region. As there is a greater threat of war in this conflict, so there is a greater threat of insecurity. As a result of this crisis, a security dilemma has been created.  This crisis may generate an arms race. There is a great threat of nuclear proliferation because of this crisis. Regional states are likely to turn the balance of power in their favor, conventional as well as nuclear. Europeans are also examining this situation closely. So, if Americans prove soft on Russians, they may form a military of their own. In this scenario, the unintended beneficiary is China. The national security goal of Biden`s administration and previous administrations’ is to contain China. This crisis has distracted the Biden administration from Indo-Pacific and indirectly benefit China.