OIC Summit for Afghanistan; Vow of protection or a hoax? 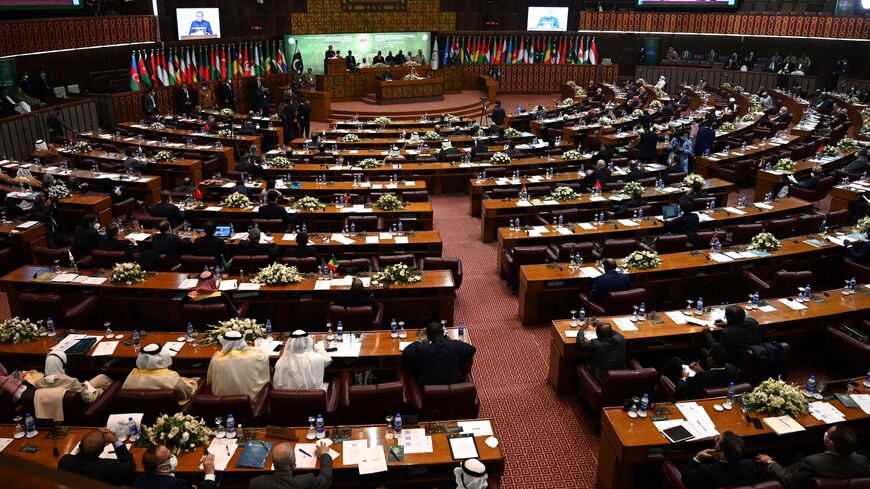 On 19 December Pakistan host an OIC Summit for Afghanistan meeting After 15 August, the Afghan government topples downed by the Taliban when they took the control of Afghanistan and the state system was collapsed all civil services damaged besides this economic crisis that happen in Afghanistan along that the Taliban are not able to control modern economic systems or the US sanctioned on them. In this situation tried to tackle related issues hosted the 17th extraordinary session of the OIC of foreign ministers on the Afghanistan situation in Islamabad. The conference was attended by envoys from 57 Islamic countries and with 70 observer delegations from the US, China, Russia, UK, European Union, and United Nations. The objective of this gathering was to find out a solution to the Afghanistan humanitarian crisis. In another point of view, the OIC stance is not too pivotal because there is rivalry inside OIC.

Role of Islamic Organization Cooperation (OIC) in the Muslim World

Islamic Organization Cooperation (OIC) was founded on September 25- 1969. After the Second World War, the paradigm was shifted on the side of collective organization or sharing and peace through trade: due to necessities of the time, Islamic countries came up to make an association to the Muslim World to slave the issues of the Muslim World as through table talks. They initiated the OIC in Morocco with 25 members Afghanistan was also part of the initiators of this organ. Incrementally After a while, the membership of these organs was increased by 57 members. After the United Nation, it is the second-largest organization around the globe it covers 22 percent population of the world and 70 percent of world energy. It creates an image of the world or shows the Muslim world unity. But after the 1979 Islamic revolution of Iran, the Shiite was raised in the Muslim world made all the systems of Iran based on Shiite Islam suppress the minorities groups and create a repressive political system. Islamic rivalries came into Muslim worlds between Iran or Saudi Arabia, Iran or Turkey, Iran or Egypt, Iran, and Malaysia. The darkness of OIC Summit for Afghanistan started from there and also the world political system was divided into three parts. Some Muslims of them supported the capitalist block or some the supported communist block and the majority of them took the side of the non-alignment movement. Western-supported them to divide them and use their resource; due to lack of professionalism, Islamic countries could not use it is resources especially Middle East countries oil rich in the world American company controlled the market of oil in the world with this age globalization still the Middle East were resources is under the control of the Western country. They created their hegemony in the Muslim countries.

The mean connecter between these two states is religion bring them in one page. Malik Faisal visited Afghanistan in 1970. He was welcomed by the Afghanistan government or the people of Afghanistan. He has exhibited the center of an Islamic research center in Kabul University or also signed multiple treaties between two states alike economic, social, and education. Or also supported more development projects in Afghanistan until the Daoud era. After him Communist parties come to power; Saudi Arabia was one of the strongest of US allies in the Middle East region because of oil resources; because of this Saudi Arabia supported the rightest groups in Afghanistan or Pakistan. Saudi Arabia has financially supported the Mujahedeen groups. Especially Saudi supported Gulbuddin Hekmatyar it has direct relations with his political parties. KSA gave it two million dollar as an aide for Hekmatyar to fight with the Kabul regime to promote the KSA regime and interest in Afghanistan and bring an Islamic government in Afghanistan.

Historically these two countries have a deeply social-cultural link with each other’s: after the death of Nader shah; Ahmad shah Abdali one of the Nader shah commanders he has segregated these two nations and created two countries. These two nations started their diplomatic relations in 1921 they signed an agreement based on international norms from the Afghanistan side was Abdul Aziz khan and from Iran side was Mujeedul Mulak. They open up their diplomatic agencies into these countries. The major source of confrontation between these two nations is ideological differences dispute this difference Iran provided shelter to the Afghan refugees. Iranian revolution happened at the same time as the Afghanistan invasion due to that Iran was faced a lot of fragile but helped Afghanistan; although Iran had its national interest in Afghanistan or installed its groups in Afghanistan. Throughout they had a confrontation on water issues and border problems. In regional or global politics Iran has its political vision and wants to be implemented in the Muslim world.

Iran also claims the leadership of the Muslim world but when Afghanistan was in the invasion challenge Iran was struggling with its internal issues.

Islamic organization cooperation as soul Islamic organ; it played its role in Afghanistan invasion. OIC vividly declared its position in Afghanistan demanded from all Muslim World aid or help to the Afghanistan refuges and send humanitarian to Afghanistan although it has it is on challenges internally to maintain to dominant of potential countries Saudi Arabia and Iran. Because they installed their networks in the Afghanistan war supported the different groups. Made a creepy situation to the OIC organ in the Muslim World. With all problems, OIC Summit for Afghanistan performed first-rate ordered to all Muslim countries to cooperate with Afghanistan refuges also Pakistan provide shelter to the more than three million refugees in Pakistan. Iran also provided shelter to over two million Afghan refugees to the same extend OIC played it is role positively toward Afghanistan crises.