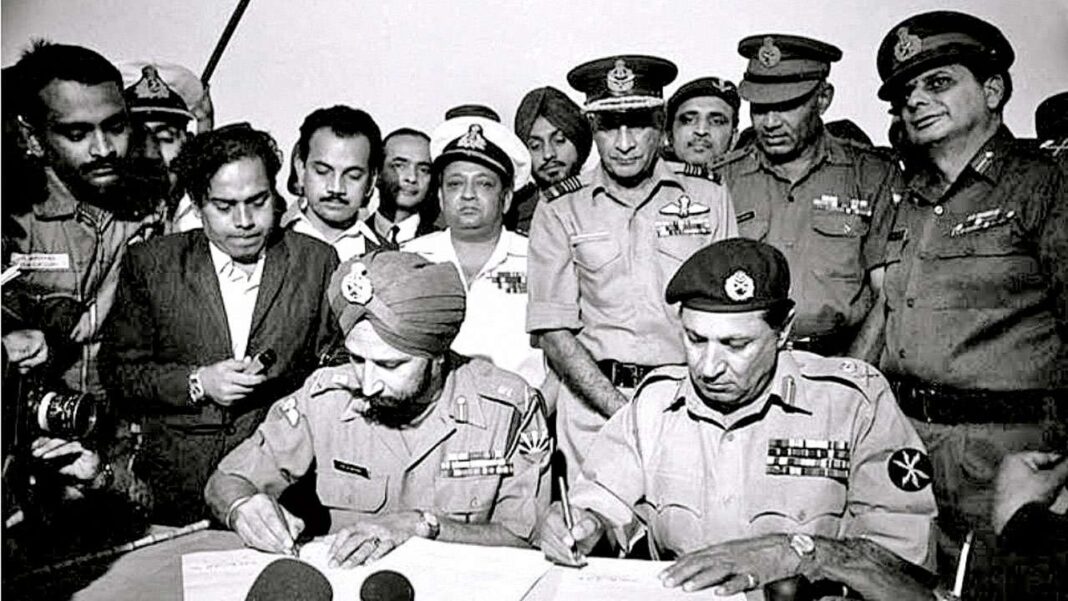 Bangladesh liberation War 1971 is a group of Bengali nationalists emerged under the name of self-determination and war of independence. The war began when the Pakistani military Junta based in West Pakistan launched operation searchlight against the people of East Pakistan on the night of 25 March 1971.

Although it was an internal issue that occurred because of the election result of 1970 it had changed the geopolitical landscape of South Asia, with the emergence of Bangladesh as the seventh-most populous country in the world.

Due to complex regional alliances, the war was a major episode in cold war tension involving the United States, the Soviet Union, and the People’s Republic of China. The majority of member states in the United Nations recognized Bangladesh as a sovereign nation in 1972.

Religion has always been used as a political tool in the history of humankind to gain their objectives. During the Second World War Muslims of the subcontinent also used religious cards against India the idea was initiated in the 1940 Lahore Resolution and they expressed Muslims becoming a minority in predominantly Hindu India.

After three days long March in 1940 annual session of the political group of British India was called the All India Muslim League. This idea and resolution obtained popularity among the Muslim majority of British India specifically in that area that experienced discrimination from Hindu leaders.

The idea of the two-nation theory more expanded between Muslims and Muslims politicians. Although the Indian ruler was opposed this idea: but the demand of the Muslim league, Muslims should have separate states, these two nations cannot leave with each other.

The all-India Muslim league first called for a Muslim homeland based on the two-nation theory the start was in 1940 seven years later at the moment of British decolonization in the subcontinent name of Pakistan add on the map of the world.

After being a separate country all Muslims were as well as happy and our great leader Quaid Azam addressed them and he said that, yes it is a Muslim country but also other religions’ people can live there in Pakistan. After the partition, Pakistan was suffered from multiple problems political, economic, and social problems.

In 1965 a war happened between India and Pakistan over Kashmir India had decided, to make Kashmir part of India so Pakistan also did not want to give Kashmir under there so that is why this fight happened between India and Pakistan.  Hostilities between the two countries ended after a ceasefire was declared through UNSC resolution 211 with the diplomatic intervention of great powers US and USSR and called Tashkent declaration.

When General Yahya khan come on power he promised to the people of Pakistan to hold the first general elections in Pakistan since independence and eventually full filled his pledge in 1970 people were voted for their candidate to select national assembly members: there were 300 seats 162 were in East Pakistan and 138 in West Pakistan a further thirteen seats were reserved for women (seven of which were in East and six of which were in West Pakistan).

The election was a fierce contest between two social democratic parties (PPP) based in West Pakistan the dynamic leadership of Zulfikar Ali Bhutto and the other was Awami league based in East Pakistan under the leadership of Sheikh Mujibur Rahman. Bangladesh Awami League (won 167 of the 169 allotted) but Zulfikar Ali Bhutto a former foreign minister the leader of Pakistan People Party, refused to allow Rahman to become the prime minister of Pakistan.

Besides that he proposed two Prime Minister Idea and also Bhutto refused to accept Rahman six points on 3 March 1971 these two leaders of the two wings along with President General Yahya Khan met in Dacca to decide the fate of the country collation government Rahman as a prime minister and Bhutto as a president on 7 March 1971, Sheikh Mujib Rahman delivered a speech and he mentioned a further point condition to consider at the national assembly meeting on 25 March but Bhutto was not cooperative with him and they arrested Prime minister-designate Sheikh Mujibur Rahman.

Language Controversy is also another problem Bengali suffered in 1948 governor-general Muhammad Ali Jinnah declared that Urdu is the national language although Bengali speaking people of Pakistan constitute over 56% of the population Bengali language movement was upset with the decision of the governor-general.

From the beginning till 1971 liberation war internal issues were there between East and West Pakistan due to military rule in Pakistan from 1947 until 1971 country was controlled by military although this country was created by name Islam the Father nation cleared in his first speech regarding all ethnicities and religious believers.

“We are now all Pakistanis, not Baluchis, Pathans, Sindhis, Bengalis, Punjabi and so on and as Pakistani we must, feel behave and act, and we should be proud to know as Pakistanis and nothing else.”

These elements enforce them fight for their basic rights Bengali nationalists voiced and demanded separated state.

Due to unwise political decisions and military intervention, Pakistan lost its wing with the cooperation and intervention of India; Indira Gandhi provided subs national diplomatic economic, and military support to Bangladesh.