How Opinions on Social Media Impact the society 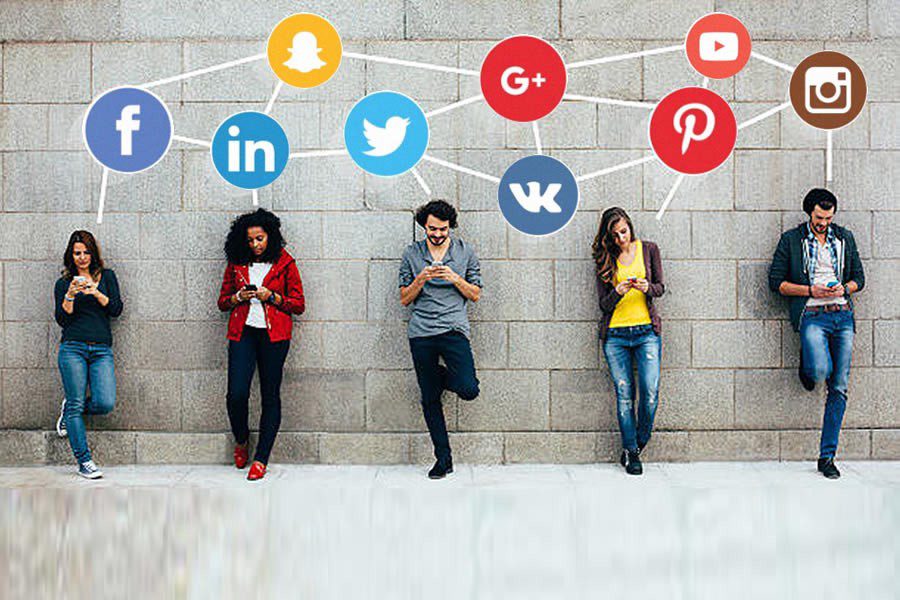 Social media is a form of electronic communication based on technology that allows people to share ideas, thoughts, and information. Social media is internet-based without any borders and gives quick access to everyone around the world to communicate and find friends, create groups, and share their ideas.

Users engage with social media via a computer, tablet, or smartphone via web-based software or applications. According to a 2021 survey, more than 4.5 billion people are using it around the world. The largest networks include Facebook, Instagram, Twitter, YouTube, and TikTok.

In the beginning, it was for interaction and communication, but after a while, it shifted the platform to a business format, and people started sharing the location of their businesses and advertising through it. This created an opportunity for those who wanted to sell their talent and also affected children’s lives by creating a choice world that challenged the traditional system of communication and values.

With the development of technology in the world, cybercrime comes at the peak of sexual harassment, ethnic hatred, and psychological issues for teenagers. But in positive vibes, today, it makes everything easy and available to everyone. Like YouTube, you can learn any language or course without any cost, or in a political view, the best platform to communicate with responsible organizations regarding human rights nowadays.

It creates an accountability court for all organizations. Each citizen raises their voice regarding their rights. Most small organizations collect funds through social media and help people.

Even during a world pandemic, social media performance is better and helps people communicate with each other about all the challenges they deal with, and provides information regarding COVID-19 around the world. It has its advantages and disadvantages. It depends on the person’s ability to use social media.

The Effects of Social Media

Is it a good combination for teens, or is it leveraging the well-being of teens? Why is social media bad? This has become one of the more controversial questions about their impact on teens and has shown various results, including recent studies on their use during pandemics.

According to a 2021 report on the impact of social media on teenagers, about half of the 1,500 young people surveyed support using social media to express themselves creatively without feeling lonely. And it is very important to get advice. Stay connected with friends and family while observing social distances.

In addition, 43% say that using social media makes them feel better when they feel depressed, stressed, or anxious. Fifty-two percent of LGBTQ adolescents say that it can help them feel better about experiencing these difficult emotions.

On the other hand, a report entitled “Countermeasures for COVID 19: How Young People Use Digital Medias to Manage Mental Health” also shows a strong link between them and teenagers’ feelings of depression. Shown. Teenagers with moderate to severe depressive symptoms were almost twice as likely to report using them almost all the time.

One-third of teens with depression reported using it all the time, compared to 18% of teens without depressive symptoms. The more severe the symptoms, the greater the anxiety, loneliness, and depression that you feel after using them. Apparently, it already feels depressed and isn’t helping teenagers who seem to be contributing to their negative attitude.

Is social media partially responsible for the dramatic increase in depression in teens over the last decade? A survey of young people in the United States found that between 2010 and 2015, there was a significant increase in depressive symptoms and suicide rates among teenagers, especially among women.

Some researchers have theorized that increased use of it and common screens during these years may be responsible for these changes. Surveyed adolescents who spent more time on social media reported mental health problems more often. Those who have spent more time on unplugged activities such as B. Personal social interaction, sports, exercise, homework, and print media did not report these issues very often.

For the past decade, this theory has been supported by a series of studies linking the use of teenage social media to the rate of increase in teenage depression. These studies show that the frequency of it use by adolescents is clearly associated with their mental health. For example, in a 2018 study, people between the ages of 14 and 17 who used it 7 hours a day were diagnosed with depression, treated by a mental health professional, or psychological over the past year.

Problems or behavioral problems. This was compared to those who used the screen for only about an hour a day. Many experts believe that constant sensory overload from it causes the nervous system to fight or escape. As a result, it exacerbates disorders such as ADHD, adolescent depression, oppositional defiant disorder, and adolescent anxiety.

“Some experts argue that young people’s use of it is adding to their depression, others that their depression leaves them so uninterested in other activities that they turn to social media by default.” Top of Form

Looking at the good side of social media, there are many benefits. Most importantly, it’s a great device for training. All you need is a click. Students can continue to educate themselves on a variety of topics through it.

In addition, live lectures are now possible through it. You can attend lectures in the United States while sitting in Pakistan. Also, as more people move away from newspapers, they rely on them for news. This keeps the latest world events up-to-date.

People will become more socially aware of the problems of the world. In addition, it strengthens the bond with your loved one. Thanks to social media, distance is no longer an obstacle. For example, you can easily communicate with friends and relatives overseas.

Most importantly, the also provides an excellent platform for young aspiring artists to showcase their talents for free. You can also get great work opportunities through social media. Another benefit is definitely for companies looking to promote their brand. Social media will become an advertising hub and offer great opportunities to engage with customers.

Despite these unique benefits, its is considered one of the most harmful elements in society. The results can be severe if social media usage is not monitored. Harmful because it invades privacy like never before. Excessive sharing of content on social media makes children a target for predators and hackers.

It also leads to cyberbullying and has a great impact on everyone. Therefore, social media sharing, especially by children, should always be monitored. Next is the addition of social media which is rampant among young people. This addiction hinders students’ academic performance because they waste time on social media instead of studying.

Social media also creates a crack in the community. By using them, fake news spreads and offends peace-loving citizens. In short, social media certainly has both strengths and weaknesses. But after all, it all depends on the user.

In particular, young people need to balance academic performance, physical activity, and them. Abuse of something is harmful, and so is social media. Therefore, we must strive to lead a satisfying life with the right balance.

According to historical information from the Pakistan Internet Service Providers Association (ISPAK), the Internet in Pakistan began in 1992 with a dial-up email service provided by ImranNet93. The Sustainable Development Network Program was launched in Islamabad in 1993.

As their article states, “This self-sustaining project provides dial-up, UUCP-based email services to the general public and is relevant to education, sustainable development, NGOs, and other related areas. The purpose was to support projects that do “(ISPAK). Even people other than Islamabad had more registrations after the SDNPK turned out to be successful. The project was funded for a few more years and was founded in other cities such as Karachi, Lahore, and Peshawar.

Eventually, with the advent of more ISPs, the program lost interest. The Pakistan Telecommunication Authority was established in 1996. Since the establishment of PTA, the steady increase in bandwidth and deployment has made Pakistan easier and more accessible to the Internet. As of 2007, Pakistan is experiencing a fast and fully functional internet.

The only obstacle to Pakistan’s progress in Internet use is the numerous bills sent to the government on behalf of the PTA. The first of these is the 2009 Cybercrime Act. The law aims to eradicate cyberterrorism through the monitoring of Internet activity and the systematic arrest of those who are considered cyber terrorists by law.

Cyber-terrorism is defined as the following: individuals, or groups, who use, access, or access computers, computer networks, electronic systems, devices, or available means to deliberately tamper with terrorism. Or, if you are involved in or attempt to be involved in organized terrorist acts, you are a crime of cyber terrorism.

Many oppose this law and all its incarnations. because it threatens the freedom of innocent people in Pakistan. This is the law that has spawned all future cyberterrorism bills and countermeasures that many Pakistani people are currently opposed to.

Today, in the 2014 country rankings, Pakistan is listed in the top 20 countries with 20,431,000 Internet users, and Internet hosts are listed in the 57th country with only 365,813 people. The conclusion from this information is that the number of people logging on to the Internet in Pakistan is increasing rapidly.

The most obvious evidence of the increasing use of the Internet is social media membership. According to Simon Kemp’s article “Pakistan’s Social, Digital and Mobile,” Pakistan’s social media have grown 50% from the first report he published.

The numbers show that there are 8,007,460 Pakistanis on social media sites. The report states that nearly two-thirds of Pakistan’s population is under the age of 30, and Pakistan is ranked as the fourth fastest growing country in the world.

This will allow more parts of the population to participate in social media. This is because young demographics tend to be the most dynamic in communication. “But Facebook is adding new users every 12 seconds in Pakistan, with 28% of its users using more than one platform, and it’s likely that Pakistan will use more social media in 2013.

This article also mentions the intended growth of other social media sites such as Twitter. “Twitter users are only around 2 million, but some estimates suggest that Pakistan’s Twitter population is approaching 3 million. Google+ also seems to be somewhat popular in Pakistan, but the exact number of users.

This information helps us understand the changing complexity of social media and terrorism in Pakistan. The use of social media by the general public is expanding exponentially, and the only problem is that the PTA is looking for every opportunity to enact new legislation that censors and threatens these netizens.

It is true that the use of social media by terrorists is increasing, and using these figures as evidence, the PTA monitors everyone’s use of the Internet and arrests terrorists who use them. I have tried several times to pass laws that help. But like any other bill that could violate the rights of the people, these bills are openly opposed.

Social media is a collective term for websites and applications that focus on communication, community-based input, interaction, content-sharing, and collaboration.

People use social media to stay in touch and interact with friends, family, and various communities. Businesses use social applications to market and promote their products and track customer concerns.