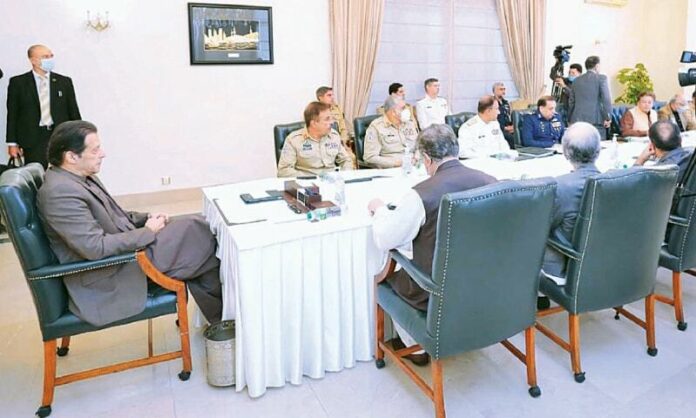 “National security” is a concept that has been globally redefined, subject to the changing dynamics of world politics and the emergence of new threats and challenges. Considering the case of Pakistan, It’s been well over seven decades since the country has acquired its independence. But for most of history since its inception, it has had a predominantly realist outlook as far as national security was concerned.

Focusing almost exclusively on defending its territorial integrity and sovereignty; more so after losing its eastern half in the early ’70s in which foreign intervention from its arch-rival India played a significant role, the same rival with which Pakistan has locked horns with over Kashmir, a dispute that dates back to independence and yet still hasn’t been resolved. It has also ignited several skirmishes between the two neighbors and has acquired such an eminent position in military security agendas that relations between the two countries have come to be viewed through the lens of Kashmir.

Kashmir aside, there has been prolonged conflict and domestic instability in neighboring  Afghanistan as well which shares the longest and most porous border with Pakistan. Porous in the sense that nearly three million Afghan refugees have fled to Pakistan in the past due to the violence in their country. The violence that has eventually spilled over into Pakistan, manifesting in the form of terrorist outfits which are a direct threat to not only the state’s security but also economic prosperity and domestic stability.

Pakistan’s geostrategic location, therefore, narrowed the scope of its national security and confined its definition to military defense. As it was beyond contestation that threats to the country emanated from its borders, most of them and most of the time, from India. This in turn elevated the strategic significance of the military dimension of state security as it overshadowed other conceptions about national security such as that which defined it in terms of human or economic security instead. As it was strategically imperative for the nation to create a robust military infrastructure. As an unavoidable consequence, the army became a key stakeholder in policy decisions, it could even be argued that this set the precedence for the long period of military rule in Pakistan.

Over the decades, as time went on, Pakistan’s rulers realized that threats didn’t only originate at the borders but also arose from within. Our adversaries could indirectly cultivate societal unrest by sowing discord and taking advantage of people’s economic and political grievances and then capitalize on the resulting domestic instability, achieving their strategic objectives at a much lower cost. However, this realization came late as decades had passed prioritizing military security and securing our borders.

The cost of overlooking human and economic security could no longer be overlooked as the population grew exponentially over time as Pakistan became the fifth-most populous country in the world. But due to the absence of the faintest conception of human security in the minds of its rulers, it’s ranked among the countries with the lowest human development indicators. Continued pooling of resources towards the state’s defense has left little for ordinary citizens.

Consequently, poverty and unemployment levels have reached an all-time high and a large population, especially a sizeable youth, is regarded as a national resource that can contribute productively towards the progress of a country. On the contrary, if the youth is unemployed and impoverished as they are in Pakistan, with two million being added to the workforce each year and accounting for nearly half of the total population of 225.2 million, then it runs counter to progress itself and instead contributes to domestic instability by fueling dissent among the masses which then gives rise to violent and extremist tendencies.

In the backdrop of changing regional and internal dynamics Pakistan experienced leading up to the second decade of the 21st century, the need for building a national consensus on the concept of national security was therefore needlessly to say, paramount. But in a way that would not only define external and internal threats but also balance the priority that is attached to either. Nearly 70 years after Pakistan’s inception, in 2014 the former PML-N government undertook this complex and yet crucial needed task of working on what would be an integrated national security policy. Little progress was achieved, however, aside from the shaping of a general outline.

The current PTI government in Pakistan led by Prime minister Imran Khan considered seeing this challenging task through, a matter of foremost national importance. The historic re-conceptualization of national security made rounds on the media in the summer of 2021 as both the Prime minister and Chief of the Army delivered speeches that signaled a “paradigm shift” from geo-politics to geo-economics. It was through the concerted efforts of all relevant stakeholders that the National Security Committee (Pakistan’s topmost decision-making and consultative body in charge of the coordination of issues that pertain to national security) approved the country’s first-ever National Security Policy (NSP 2022-2026) prepared by the National Security Division (NSD).

As per the National Security Adviser, Dr. Moeed Yusuf, this was the result of extensive consultations with stakeholders that spanned over seven years from 2014 when this process was initiated after the establishment of the NSD. Consultations started to pick up the pace in 2018 when a drafting committee was set up to expand on the work that had been already done. This was then followed by multiple rounds of feedback on several drafts with all state institutions, including provincial governments and hundreds of analysts and academics from across the country to ensure broad stakeholder participation and inclusivity.

The NSA also alluded to how this isn’t a one-off policy that should be interpreted for scoring political points as it will be a dynamic and evolving document that is going to be reviewed yearly to account for policy priorities in an ever-changing global environment. The NSD was tasked with reviewing its progress by collaborating with concerned departments and ministries.

The federal cabinet also gave its approval on 28th December 2021 for the policy which could be said to be a formality considering the momentum and weight behind it. Both the Prime minister and his national security advisor remarked it as being historic and citizen-centric, entailing a comprehensive security framework that would no longer focus solely on the military dimension of national security. This forms the basic premise of the policy that Pakistan as a nation, will only be secure in the true sense of the word if its human and economic security work in tandem with military security. Only when the size of the economic pie is increased through economic development, can military security be achieved without compromising on promoting human development that would greatly improve the well-being and livelihoods of citizens and uplift social mobility.

Economic development has certainly been placed at the forefront of this new national security vision as the policy itself hinges on the achievement of economic security by regional connectivity and integration. This is underlined by the aim to change the international image of Pakistan from a hardliner prioritizing military security above all to be a hub of regional connectivity with Central Asian states through Afghanistan, to this end, Pakistan has been tirelessly pushing for ensuring domestic stability in Afghanistan. Foreign policy, in general, will be realigned in the advancement of economic interests, particularly in the Sino-US where Pakistan would forego “camp politics” and will seek avenues for convergence of economic interests in the form of trade and investments.

The internal dimension of such a shift to economic prosperity will depend on overcoming socio-economic inequality through various existing social welfare programs. This was followed by subsequent removal of economic disparity between the developed and underdeveloped localities which it regards as a contributing factor to the increased militancy in conflict areas. Economic disparity is one of the major hurdles that lie in the way of achieving one of the key objectives of this NSP: Social cohesion, The policy document drives home the idea of “unity in diversity”.

Furthermore, there is more to the NSP than a mere complementary framework of economic, human, and military security. Its formulation has also expanded the security discourse in Pakistan by recognizing the symbiotic relationship between the non-traditional and traditional security threats. While terrorism, both from within and foreign, is still at the top of the list concerning issues of internal security and it would have been idealistic to expect the absence of sections dedicated to Kashmir, the strategic significance of which as mentioned in the beginning, cannot be understated. The NSP acknowledges non-traditional threats as well alongside these traditional threats such as highlighting various issues of population increase and the subsequent migrations which tax the food and water resources alongside climate change which exacerbates an already dire situation. Not only the acknowledgment of such non-traditional threats which were neglected in the country’s security discourse for decades but also the heightened sense of urgency to address these issues and the national consensus to do so is a noteworthy achievement of the NSP.

Muhammad Faisal Riazhttp://www.timesglo.com
Faisal Riaz is a graduate in Political Science at School of Politics and International Relations QAU, Islamabad