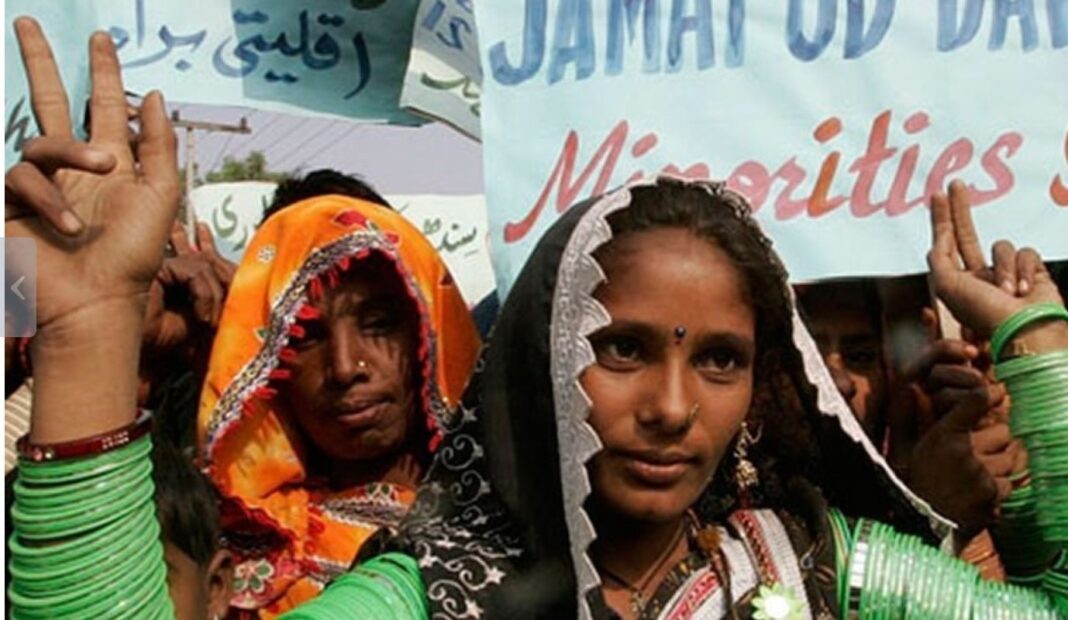 The minorities in Pakistan have always been treated equally and provided freedom of speech.  The Islamic Republic of Pakistan’s constitution, equated in 1973, places great emphasis on the Rights of Minorities.  ”Article 36” – says, ‘ State of Pakistan shall safeguard the interests of minorities and legitimate rights, including their due representation in the Federal and Provincial service.’ Separate reserved seats are allocated to minorities in provincial and national assemblies, and to accommodate their representation in the Public Service Commission Examinations, a separate quota framework is implemented. Besides the civil and political representation, Pakistan’s ideology and its national flag also reflect an equitable share and importance of minorities in the composition of the nation, which will mark 74 years of its existence on August 14, 2021. The founder of Pakistan, Mr. Muhammad Ali Jinnah also made it clear that the state will have no concern with the religion of the citizens of Pakistan. The minorities in Pakistan mainly encompass Hindus, Christians, and Sikhs. History also proves the fact that the most dominating ethnicity is of Hindus.

People belonging to one of the oldest civilizations are argued to be the most loyal individuals of our society, and the past has shreds of evidence to accompany the claim. At the time of partition in 1947, innumerable Hindu families remained in Sindh and Baluchistan for their unquestionable endearment for the country. Pakistan is the shelter to the world’s 4th largest Hindu population. The religion of Hinduism, followed by 4 percent of the 200 million population and is the second-largest religion in Pakistan after Islam. Unfortunately, till the late ’90s, there were no proper laws available to safeguard the rights of minorities, and the need was felt when several incidents related to forced marriages, child marriages, and forced conversion took place, which led to insecurity amongst the community. According to Pakistani Hindu Council sponsor Ramesh Kumar Wankwani, “The state has a responsibility to ensure that all forms of protection for minorities in the country, including Hindus, from any ill-treatment, and to ensure that they enjoy the same rights, are responsible like any other person in the country.”

Article 18 of the ICCR,” International Covenant on Civil and Political Rights” declares: “Everyone has the right to freedom of conscience, thought, and religion. This right includes the right to freedom to have or accept a religion or belief of one’s choice, as well as freedom, individually or in community with others, publicly or privately, to express one’s religion or belief through worship, observance, practice, and teaching. No one should be subjected to coercion that restricts their freedom to adopt the religion or belief of their choice. “The Aurat Foundation and the Solidarity and Peace Movement (MSP) estimates that more than 1,000 women and girls from religious minorities are kidnapped, forcibly converted, and then exited each year. The Pakistani Amarnath Motal Commission notes that 20 or more Hindu girls are abducted in Pakistan every month converting to Christianity.

According to article 14 (1): “The participating States must respect the child’s right to freedom of thought, conscience, and religion”.

This is detailed in a report from the University of Birmingham, which says that several MPs (members of parliament) worked in Pakistan to support action under the Raja’s Forced Conversion Act. Zafarul Haq (PMLN), the leader of the Senate, said that in November 2016 there are no problems with the Sindh Criminal Law (Protection of Minorities) Bill passed by the Parliament of Sindh province, and this law is badly needed. It is argued that the adopted bill, together with the teachings of Islam, contradicts someone’s obligation to convert to another faith. On October 22, 2017, Prime Minister Imran Khan spoke out against the violent conversion of non-Muslims. Lal Chand, trying to get parliament to pass the 2016 Minority Protection Act. Likewise, Hina Pervaiz Butt recently proposed a similar bill to the Punjab parliament. In addition, Azra Fazal Pechuho, raised the issue in parliament, calling for a law on the kidnapping and rape of Hindus. Sherri Rehman is another prominent Pakistani politician who has also joined the issue, an established human rights activist who has demonstrated a commitment to the values ​​of freedom and the empowerment of women. Miss Sherri Rehman founded and headed the Jinnah institute, which promotes progressiveness.

In addition to the support provided by several MPs and the Constitution of Pakistan, the need was still felt to propose legislation to cater to the problems faced by the minorities. The attempts were made to enact the Child Marriage Restraint Act, Sindh Criminal Law (Protection of Minorities) Bill, and Hindus Marriage Act, but both the bills failed to resolve issues because of undue political pressure and domination. The Hindus Marriage Act was brought to life; a landmark piece of legislation that mainly covers the matters related to Hindu marriages that seem to have produced some positive results. Before this Act, there was no proper registration for marriages, which led to injustices against women. Therefore, due to the lack of marriage evidence, they could not get legal status in the property and were forced to marry Hindus under 18. However, on a broader aspect, this landmark legislation did not restrict the marriages happening with non-Hindu. All in all, it did not provide any solution to forced conversions or early child marriages.

Moreover, the Child Marriage Restraint Act enacted in 2013, published officially in June 2014, enhanced the prohibitory age from the current 16 years to 18 years. Also, it increased the relaxation in child marriage to a maximum of 3 years of severe imprisonment alongside a fine. The given law has made the offense cognizable, non-compoundable, and non-bailable. It is also noteworthy that the featured piece of legislation was not specified to any religion and applied to all citizens living in Pakistan. Children’s rights were one subject that the prior law caters to. At the same time, some religion law undermines the Child Marriage Restraint Act. According to Sherri Rahman, several Muslim countries, including Bangladesh, Egypt, Turkey, Morocco, Oman, and even UAE, have declared 18 an age to marry. UNICEF reported that early child marriages violate Article 2 of the UNHCR code of conduct, and it leaves affects both the genders,  girls are disproportionately affected, especially in South Asia.

Furthermore, the prominent piece of legislation which was solely drafted to address the problems of forced conversions – was the Sindh Criminal Law (Protection of Minorities), Bill. This bill was all the way agreed by the Sindh Assembly in November of 2016. HRCP and Hindu American Foundation argued that this rule was well-intended and embark upon many of the issues related to forced weddings as it attempts to mandate specific instruments of implementation as well as laying legal guidelines. Unfortunately, this bill never reached its conclusions and remains a mystery.