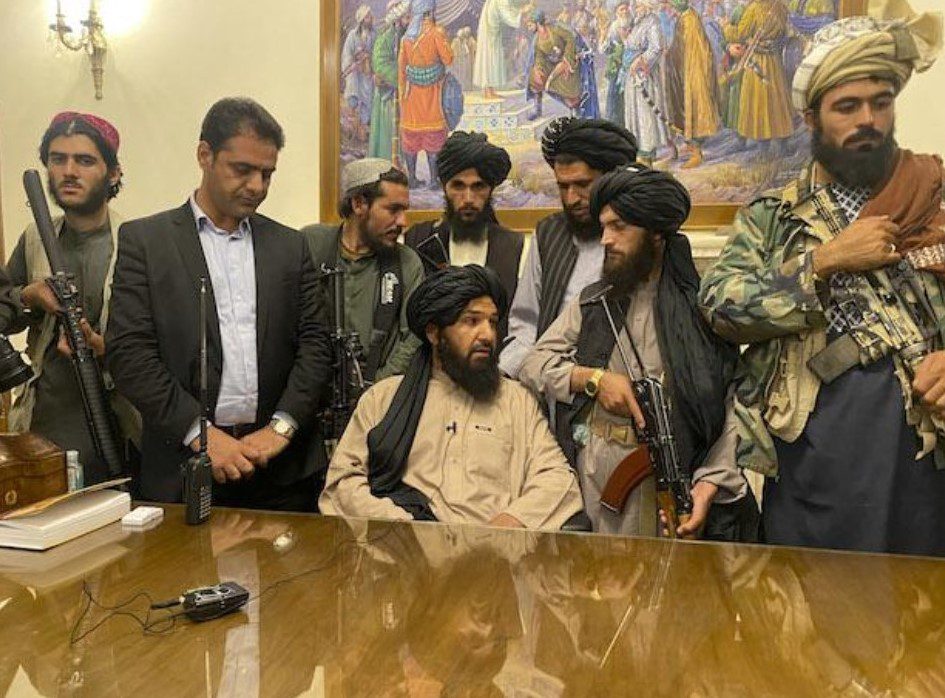 In this rising chaos of Taliban’s occupation and calling an end to the war era, the Taliban government is legitimate in the case of Afghanistan because what better alternative was attainable in the presence of power vacuum, which was, by the way, a consequence created by the former president Ashraf Ghani, who succumbed and fled away leaving the desperate Afghanis in the hands of fate. LEGITIMACY OF TALIBAN GOVERNMENT

With that being said, Ashraf Ghani’s government would not have been in the best interest of Afghanistan, as he was ultimately a Lackey of the United States and in case, if his government would have succeeded, another era of mayhem was to secure its place in Afghanistan while situation would have continued in a vicious cycle of constant disorder and civil unrest as well as proxy wars taking place from Afghanistan as usual.

In addition to that, in the current scenario or any situation of warfare, the news reporters and channels do a great work of being Spin doctors to create propaganda and bewilderment among common people. However, according to the spokesperson of the Taliban “Mr. Sohail Shaheen“, he staunchly denounced the claims and narratives of Western media that, Afghan Taliban are barring women to go out without a male escort as well the claim that put forward the concern regarding women education and so on and forth including other factors like public executions. LEGITIMACY OF TALIBAN GOVERNMENT

As seen according to their media channels; Tolo news and likewise. The Afghan female journalists were seen continuing their work and reported, as usual, wearing hijabs. This shows altogether an opposite side of the story which the west is putting forward.

Furthermore, keeping in mind that, it is not the same Afghanistan which the Soviets invaded in 1979. The cultural thought process and tradition of people there have all transformed. LEGITIMACY OF TALIBAN GOVERNMENT

The question here is that, where we don’t interfere in Iran’s matters despite knowing that, they have the highest rate of journalists in jail as well as lack of freedom of speech, then why we are not ready to accept the Taliban government? LEGITIMACY OF TALIBAN GOVERNMENT

Every nation has its cultural values, like that of Pakistan, we have our own culture. If they want their women to wear the hijab while working then how this narrative is problematic?, we promote our national dress code that is shalwar kameez and in the case of Saudi Arabia, they have their cultural values, which they won’t give up despite any pressure. Moreover, other countries like France bars women from wearing hijab and calls it as, freedom of speech. LEGITIMACY OF TALIBAN GOVERNMENT

Therefore, a complete carte balance itself is not possible because too much freedom is also incarceration and one person’s freedom might infringe on someone else’s freedom. There should be some limitations to it in a way that is Favorable for everyone.

Hence, one needs to think about the current situation critically as well as it is important to refrain from sharing without knowledge because knowledge without wisdom can be purposeless and menacing. Nevertheless, it’s too soon to pass any judgment, however, analyzing their coming policies and actions taken in the coming future will surely pave a lucid way for everyone to predict Afghanistan’s future.

Either way, the current decision was meant to happen to put an end to this long forlorn war, which Benefitted none. Lastly, Keeping a close check on future updates from the Afghan Taliban representatives and their media would be more practical to predict their coming advancements rather than mindlessly following the foreign media’s narrative alone, because as a matter of fact if they would have been that concerned about the people of Afghanistan then all of the narcissistic decisions of continuing war made prior by the United States would have never taken its position in the first place and things would have been resolved with negotiation and bilateral dialogues. LEGITIMACY OF TALIBAN GOVERNMENT

China, Russia, Britain, and even the United States of America have shown a clue to develop future relations with the Afghan Taliban and aid them to flourish their new government and state. We all know very well that a state never and can never live in isolation. Of course, there exist two-sided interests, no doubt it is a matter of giving and takes cooperation and sustainability. So, what’s unfair in this? LEGITIMACY OF TALIBAN GOVERNMENT

What is wrong if China is looking for trade, Russia is looking for ending rivalry, and Britain is looking for her light days in Afghanistan? What else can be expected in this global village world? Globalization has extended interests, vanished borders, and made states dependent. LEGITIMACY OF TALIBAN GOVERNMENT

I’ve heard many journalists talking in favor of such policies, and many talking against them, but the thing is to accept the change that is reality.