The Dark Tunnel of Unemployment in Pakistan 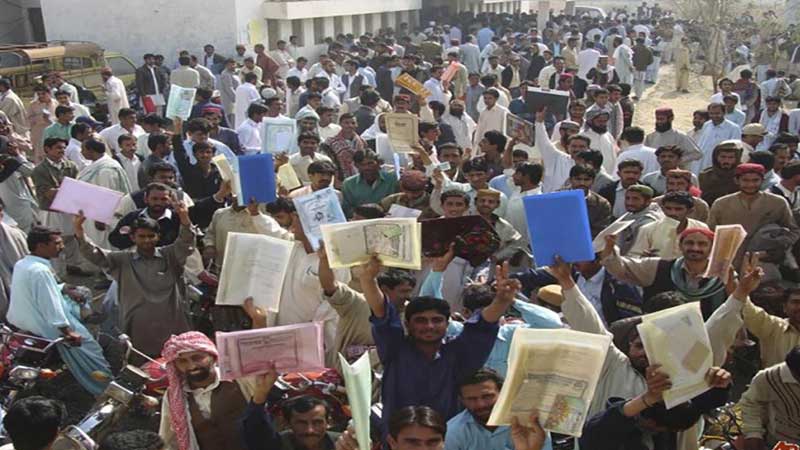 The Dark Tunnel of Unemployment in Pakistan

The disaster in the covid-19 pandemic becomes a real and major hurdle for the economies to grow. It does not only impact the business markets but also damaged the whole system of wealth circulation. Leading majorly to collapse the internal situations of Pakistan, the major setback was seen in the unemployment ratio of 2020-2021. It impacts the population as the country is already suffering from poverty and other major issues such as opportunities for young graduates for jobs. This has dissolved the grooming of the young population of Pakistan as it suffers more day by day.

The statistics of the government’s annual plan 2020-2021 show Pakistan as the 9th largest labor force producer, with each day giving an exclusive raise to the number. In such conditions, the opportunity in the markets shrink. Pakistan is facing a dilemma of unemployed graduates, degree-holders with no opportunities, and estimating the three-times higher unemployment rate than ever. This becomes a far-sighted yet clear question to the government of Pakistan and to the market sector which is extremely nauseous in accepting the fresh graduates.

The index of 2019-2020 shows 62.18 million unemployed educated people. In 2021, the number increased to 62.91 million, giving an effect of 9.56 percent raise. The number of unemployed educated people is far greater than the labor force. This is because the sectors providing the work to educated people tend to hire less as they produce less capital in such an environment. Also, the opportunities as per the need of educated people are far less as the universities offer different programs to study but the market as of that is saturated. Also, the focus on the scope of the study is dependent upon the job opportunity which means that people look up to that category that has a higher number of jobs. For example, in the IT sector, Pakistan produces 20,000 IT engineers each year while the market has in total 120,000 engineers.

The eminent growth of unemployment affects the middle-class educated sector. The young population in Pakistan is 63 percent while the unemployed age of 20-24 years, rates in 11.56 percent. Giving the highest unemployed ratio, Pakistan has to tackle such a challenge. In such conditions of market closure, it is difficult to establish the grounds for employment. Giving an extreme gap between the education and job market, Covid-19 has played a vital role in widening such gap.

There is no doubt that the increasing number of unemployed causes distress in society. With each passing day, the educated class is more eager to get a job to even fulfill their basic needs. It is more like a threat to society as it will not only lessen the impact of education but also will focus more on the labor force. Just because the labor class has more working opportunities than the educated class, it forms a psychological impact on the degree-holders.

There is one grave reason for the unemployment as well. The population explosion seems to be the reality of society. By 2030, Pakistan will reach 280 million people currently lying in 219 million. This brings a huge devastating effect on the market as the gap will increase more between the working class and the job market. The seriousness of such an issue brings a rather big challenge for the government than it seems.

There is a need to formulate a relationship between education and employment. The market should define the number of graduates in any particular field rather than universities showing the vacancies. Through such procedure, the graduates will get a job even before getting a convocation which will build a sense of actual realization and motivate the people for getting an education. This way, the unemployment in the industry will reach downwards.

The other way for the government is to allow the MNCs or local corporations to build industries for every field. By this, the scope of study which most of the population considers rather than following the interest will decrease. As there will be opportunities in almost every field, the scope itself will generate. It will provide gainful opportunities for employment.

The pandemic has given series of effects that might be lasting for years. The only suffering remains with human beings. The reason for unemployment remains with the fact that global markets are suffering, and they will create a huge gap between work and labor in the following years. The only possible way out is for the government of Pakistan to act upon the annual plan and present a solution to lessen the gap between education and jobs.