World in under transition from a Unipolar moment of US to a multipolar sphere. The contemporary dynamics of global political economy and global political security in the 21st century is experiencing experimental change. This parity has brought prodigious challenges to mankind. World big powers are looking for new alignment. Even change in Sino US relations is not a simple change, changes would affect the international system. Relations would impact the whole world. Post cold war order established in the west by the US after the collapse of Soviet Union. In terms of institutions, international order was represented by nun of international Organization including United nations, world bank, IMF and world Bank. Within these organizations, leadership has long been occupied by western countries, even agenda decided by those leaders, so how can you expect free and fair decisions? 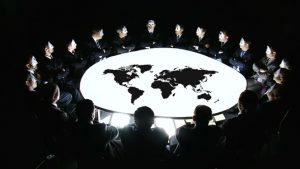 Opening up approach of China

China has gone through three stages. The first stage, ” Economic liberalization “started in 1978 when trade volume was negligible in the entire world economy and its GDP per capita was $156. In order to progress, China took the initiative and opened foreign investment, but China adopted a unilateral openness policy regardless of whether other countries are open to China or not. China opened its doors to other countries. The second stage was integration which occurred during the process of China’s entrance to the world trade organization in late 1990s. China made some reforms in various internal laws, systems, and policies to comply with international norms. Going out Approach of China Joining world trade organization was the starting point of China’s going out policy. Going out policy can be divided into two stages. The first is going out of Chinese manufactured goods. Soon after joining the WTO, China became a manufacturing factory in the world. Secondly, China quickly turned from an economy with a high capital shortage to an economy with surplus capital. When China went out, the geopolitics of the world was dominated by the west.

Relations of china with international community

The changed nature of China’s global relations relationship between China and the international community, especially international organizations generally went through three stages. During the first stage of joining China, we chose to connect with the international community and actively took part in the international system, that we call the global village’ became inseparable from China’s choice. The second stage is to reform the international system for developing countries. It is unfair that the distribution of power within the international system is discriminatory. After joining these organizations, China has always been committed to carrying out internal reforms. In the past few years, emerging economies of developing countries have increasingly become important in the global economy, but this was not reflected in the distribution of power within international organizations. The third stage is innovation supplement is a new trend in recent years. Maintaining and improving the current system is still not enough to cope with emerging challenges. For example, with globalization, countries around the world are not becoming fair but opposite, simply the world is becoming an unfair income gap between countries is rising.

A significant pillar of Globalization in recent few years

China has taken the banner of free trade and started to lead economic globalization. Although the west has been leading economic globalization since the colder war over. But in the era of Trump, America had adopted a protectionist and isolationist approach polices were internal centered skeptical and less vulnerable. China established organizations such as the Asian infrastructure investment bank and the BRICs Bank and launched projects like BRI economic initiatives. So, the automatic influence of China is emanating in the world and US influence has dwindled since the last two decades.

World order is disrupted because of the following elements

Iraq and Afghanistan invasion was an external and hawkish approach which was the part of American project vision. The US adopted a Jackisonian approach against Iraq and Afghanistan but they failed because of miscalculation. Super powers have always taken such types of decisions. America invaded Iraq on the pretext of Weapons of mass destruction (WMDS) spending dollars and time, but in the end, it is proved that it was a mistaken decision. Invaded in Afghanistan but the result was the same again. America did not succeed in its objectives because of cultural dynamics and mistaken policies towards nation building led America towards failure.

During the cold war, Russia was militarily, economically, politically and socially destroyed by Americans. Russia did not indulge himself in world affairs till 9/1. Russia worked on its strength, it’s domestic reforms, military building. When Bush indulged America in the war on terror and in the war in Iraq, then there was a strategic vacuum but after 9/11 Russian policy was highly externalized, highly expansionists, hegemonic and power oriented in 2014 Russia annexed the Crimea and Stephen Pifer said If I put Crimean message into slogan.

In simple china policies are American centered if America is standing with Kingdom of Saudi Arabia, then china would definitely be the proponent of Iran recent developments are evident of it Chabahar deal was signed between Iran and china and according to deal china would invest $400 billion dollar in Iran so, influence of china in the region is exacerbating and US influence is diminishing.

Covid -19 has wreaked a havoc in the world. Even the Economy of the super powers have been ragged by the pandemic. Inept handling of US and policies of trump had adversely affected the US. Even other European countries had Faced tumblehome because we have just focused on nuclear arsenals, superpowers had focused on ammunitions like nuclear programs, military tactic’s, submarines but no one was prepared for such type of extraordinary situations so, covid -19 has disrupt the world order.

Organizations like SCO and BRICS are ready to supersede the place of UN and other western organizations that was unfair. SCO was formed by Russia and China and consist of different types of organs but RATS is the organ which is quite attractive can be defined as regional anti terrorism structure of shanghai organization that would deals with terrorisms activities in the region and cooperation in trade and in other areas are the key points of this organization. There are chances that in future regional conflicts would be solved in SCO. BRICS mean five major emerging economies: Brazil, Russia, India, chin and south Africa. population of BRICS countries, gross domestic product, and exports imports are escalating which is a biggest threat to western organizations. BRICS has emerged as a new region of their own with certain shared similarities and objectives.

One of the major pieces of conventional wisdom these days is that US is declining as a global power and world is moving toward a multipolar system in which many nations will have sway. And the role of European organizations is dwindling because many other organizations are ready to counter the western organizations.