The great depression of 1930 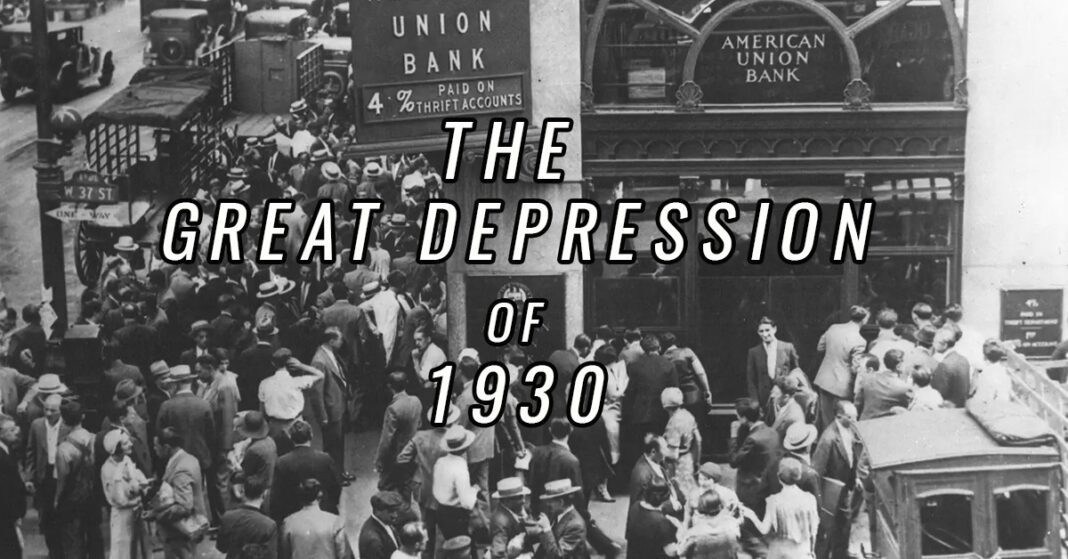 The 1929–1939 Great Depression was a global economic depression that affected all countries. The industrialized Western world had never before faced a depression of such length and severity, and as a result, economic institutions, macroeconomic policy, and economic theory underwent significant changes.

Despite having its roots in the United States, the Great Depression had a profound impact on nearly every nation in the world, leading to sharp drops in output, high levels of unemployment, and acute deflation. No less startling were its social and cultural repercussions, particularly in the United States, where the Great Depression was the country’s greatest period of hardship since the Civil War.

Global gross domestic product (GDP) declined by an estimated 15% between 1929 and 1932. In contrast, during the Great Recession from 2008 to 2009, the global GDP decreased by less than 1%. By the middle of the 1930s, some economies had begun to recover. However, the consequences of the Great Depression persisted in many nations until the start of World War II.

Falling personal income, prices, tax receipts, profits, and prices all had devastating impacts in both rich and poor countries. International trade decreased by more than 50%, while unemployment increased to 23% in the United States and up to 33% in certain other countries.

Cities all throughout the world were severely impacted, particularly those reliant on heavy industry. In many nations, construction essentially came to an end. As crop prices dropped by around 60%, farming communities and rural areas were adversely affected. Areas depending on primary sector sectors suffered the most as a result of declining demand and few job alternatives.

Economic historians typically view the abrupt, catastrophic decline in U.S. stock market prices that began on October 24, 1929, as the prime cause of the Great Depression.

Causes of the great depression

Regarding the precise causes of the Great Depression, historians and economists cannot agree. However, most academics concur that at least the four causes of the great depression contributed.

The stock market crash of 1929

The American stock market had an unprecedented boom in the 1920s. As stock prices reached record highs, buying stocks became regarded as a simple method to make money, and even those with modest financial resources lent against their homes or utilized a large portion of their disposable income to do so.

By the end of the decade, hundreds of millions of shares were traded on margin, which means that the loans used to purchase them were repaid with the gains from their rising share prices.

In October 1929, when prices started their inescapable drop, millions of overextended owners panicked and hurried to sell their holdings, accelerating the decline and causing more panic. Stock prices dropped 33% from September to November.

As a result, consumers and businesses suffered a severe psychological shock and lost faith in the economy. As a result, company investment and consumer spending, particularly on durable items, were severely restrained.

This resulted in decreased industrial output and job losses, which in turn led to further restraints in spending and investment.

Between 1930 and 1932, there were four protracted banking panics in the United States, during which a sizable number of bank clients simultaneously tried to withdraw their cash deposits out of worry for the viability of their banks.

Ironically, the most common result of a banking panic is to create the precise disaster that anxious clients hope to avoid: a significant panic can collapse even financially sound banks.

Prices fell as a result of the decreased money supply, discouraging lending and investment even further because people feared that future wages and profits would not be sufficient to cover loan payments. And these were the causes of great depression.

The gold standard undoubtedly contributed to the Great Depression spreading from the United States to other nations, regardless of how it affected the country’s money supply. The United States tended to run a trade surplus with other nations as it experienced declining output and deflation because Americans were purchasing less imported items while American exports were still quite affordable.

Due to these disparities, considerable amounts of foreign gold were exported to the US, putting the currencies of those nations at risk of devaluation and causes great depression.

While the American economy was still growing in the late 1920s, lending by American banks to foreign nations decreased, in part because of the country’s comparatively high interest rates. Some borrowing nations, particularly Germany, Argentina, and Brazil, whose economies experienced a slump even before the start of the Great Depression in the United States, benefited from contractionary effects as a result of the decline.

In the meantime, American agricultural groups pressured Congress to enact new levies on agricultural imports because they were suffering from overproduction and greater competition from European and other agricultural producers.

Facts of the great depression

Timeline of the Great Depression

A brief timeline of the great depression: