What is the future of touchscreen technology 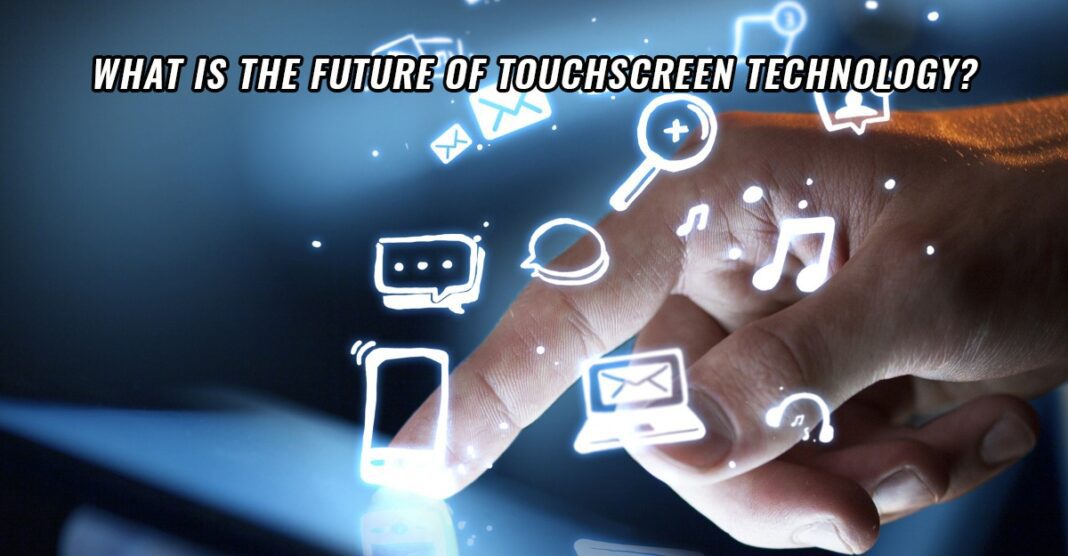 Clarity, sensitivity, drift-free response, and prolonged functioning after being scratched have improved the popular view of touchscreens.

With every touchscreen panel they use nowadays, users have come to “expect” experiences similar to those found on smartphones. This calls for the incorporation of capacitive smartphone touch experiences in tough industries including retail, finance technology, business, and even outdoor signage.

What is touchscreen technology

Keyboards and mice are two common input methods for computers. Particularly for mobile devices, touchscreen technology has proliferated in recent years as a means of interacting with computer systems.

From the keyboard and mouse, human-computer communication has advanced significantly. As interactivity on mobile devices increases, touchscreen technology enables users to interact directly with a computer system’s electronic display, doing away with the need for a large mouse or keyboard. Discover the meaning and uses of touchscreen technology.

The Technology Behind It

Using a touchscreen is a concept that dates back to the 1960s, the early years of computing. Up until a few commercial systems found success in the 1990s, the majority of systems were still relatively experimental.

Resistive touchscreen technology is the first significant technology to achieve success. This makes use of a panel with multiple layers, including two thin, electrically charged layers spaced apart by a tiny gap. These two layers come into contact when you press on the panel, and the input is the location where the connection was made.

Touchscreens with high liquid resistance are quite inexpensive. The two main drawbacks are that they have pretty weak contrast and require you to really press down with a specific amount of pressure.

Capacitive sensing is the second important technology utilized in touchscreens. A layer of insulating material, such as glass, is covered with a transparent conductor in a capacitive touchscreen. The electrostatic field of the screen is altered when you contact it with your finger because the human body is also an electrical conductor.

The position of the touch can be recorded using a variety of techniques. Using a small grid of capacitors to record changes in the electrostatic field is one of the most used methods. These capacitors are arranged in rows and columns and operate separately from one another.

Touchscreens are a common and cutting-edge kind of technology that are used in a wide range of entertainment, communication, and customer service devices. Without the use of tools like physical mice and keyboards, touchscreens allow users to interact with interfaces and operate devices.

Both tactile digits and styluses can be used for touchscreen interaction. Touchscreens were invented in the 1940s, but the technology was extensively improved in the last 20 years.

Following is the three types of touchscreens technology:

While certain touchscreen interaction techniques call for a stylus, others can be used with the human hand. These techniques use several grid controllers to locate the cursor using resistive touch, heat sensors, noise disturbance, and electric conductivity. There are general guidelines for designing and deploying different types of touchscreen technology, particularly non-mobile applications, because of several ergonomic problems relating to user comfort and capability.

The touch from both inorganic and organic instruments can disturb the electrical current in a resistive touchscreen, a type of touchscreen technology. This current is surrounded by several layers, including two metallic layers, one of which is conductive and the other resistant.

Above a glass pane and below a scratch-resistant layer are the metallic layers. The light pressure applied by an object, such as a finger or stylus, causes the metallic layers to join. The touchscreen device’s computer components can then determine the exact place of the current interruption, enabling interface operation.

Ultrasonic acoustic waves are transmitted across a layer of reflectors using surface acoustic wave technology. The waves are broken when a finger touches the screen, allowing the computer to determine where the contact was made.

Electric charges are included in capacitive touchscreens, which have a glass panel that stores charges. Chips under the board that pinpoint the touch area direct the charge when a conductive instrument makes contact with the panel.

With its widespread use and rising quality, capacitive touch technology is now present in almost all smartphones and tablets. As manufacturers now have better access to low-cost touch technology and attractive TFT displays ideal for use in kiosk displays, instrumentation, and navigation systems, resistive touchscreens will soon be a thing of the past. In the future of touchscreen technology, new inventions will be implemented.

AMOLED screens will become much more accessible as technology advances, and our team projects that they will be the dominant screen choice in two to three years. One area where touch is anticipated to advance is haptic feedback, which offers vibration and other physical inputs while you use the screen. On a touchscreen, users may ultimately be able to “feel” different objects and textures, improving usability overall.

The key for manufacturers is to concentrate on the display’s quality and incorporate touch technology whenever it is practical. Touch has already become a minimal expectation among users, and this trend will continue to grow. Take young children, who frequently attempt to use touch on screens out of sheer instinct.

They represent the future generation and demonstrate the necessity of touch as a fundamental feature on all screens. In the future of touchscreen technology, practically every device will require a touchscreen. Your items could lag behind if they don’t have it.