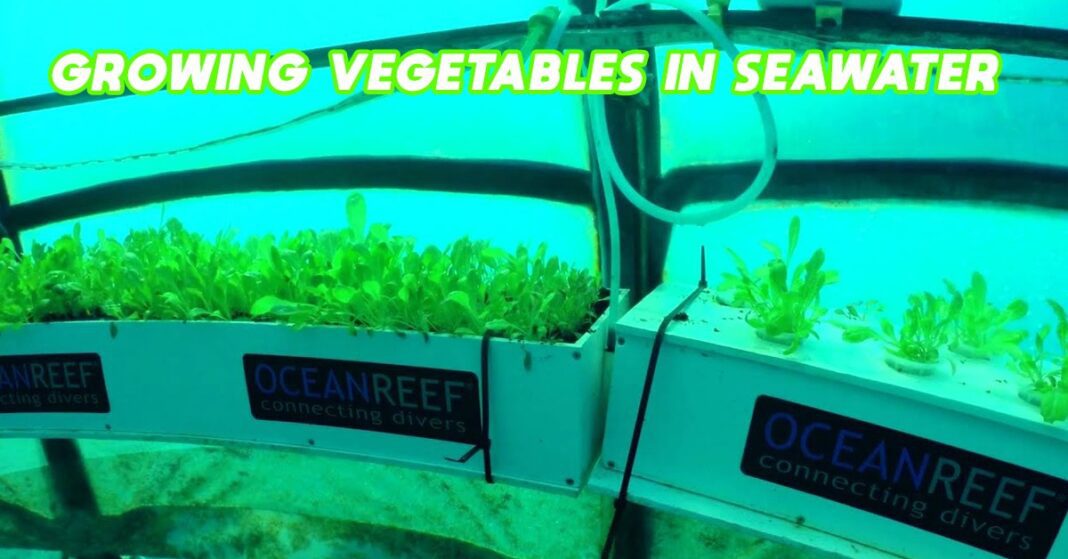 Growing vegetables in seawater. According to a recent study, food production must expand by 70% in the upcoming 30 years to feed a global population that is forseen to reach 9 billion people.

Due to the effects of climate change, traditional agriculture is experiencing a growing water shortage. Only 2% of the water on Earth is freshwater, which we use to drink, wash, and cook. Most of it is trapped in glaciers, so we don’t even have access to it.

The Sub-Indian continent and the Sub-Saharan region are two places where water is either extremely sparse or highly contaminated.

Even areas known for their rain, like the UK, are experiencing droughts because of low rainfall and rising water use. The UK hardly received half of the typical rainfall it would have in 2020. That spring was the driest on record in several parts of England and Wales, according to the UK Centre of Ecology and Hydrology, and the fourth driest on record overall.

Because of this, a farm on Scotland’s west coast is growing vegetables in the Atlantic Ocean.

They are replacing freshwater with saltwater to grow food, led by the Glasgow-based business Seawater Solutions.

Yanik Nyberg, CEO of Seawater Solutions, says, “We take this land, whether it’s degraded agriculture or flood-affected regions, and we then develop an artificial saltmarsh ecosystem where we can extract food at the same time.”

Seawater will pump this area, occasionally flooded, and then saline vegetation will start to flourish there.”
These plants, known as halophytes, flourish in semi-deserts and seashores that have water that contains a lot of salt.

Halophytes are edible or can be used as a source of primary materials for biofuels, cosmetics, and animal feed. They thrive in salt marshes that absorb 30 times more carbon than rainforests and shield the shoreline from erosion and flooding.

Solving the problem of soil salinization

The Salt Farm Foundation in the Netherlands has shown that “traditional” crops like potatoes and cabbages can handle larger concentrations of salt than usual, whereas the operation in Scotland is labor-intensive and extremely seasonal.

Its Texel Farm, located on the North Sea, uses medium brackish water, a combination of freshwater and saltwater, to grow vegetables.

The organization is trying to find a remedy for the issue of soil salinization, a global phenomenon brought on by climatic change effects.

This occurs when seawater floods the area or seeps through the ground, leaving farmers with desolate fields where they are unable to cultivate crops as they once could.

The Salt Farm Foundation has established 16 fields on the North Sea in seven nations with its collaborators from the SalFar Project to investigate the salt tolerance of different crops.

Feeling the effects of climate change

Scottish farmers may not yet perceive climate change effect as a serious threat to their way of life since they have not been as impacted by it as their counterparts in other parts of the world. Similar to this, the Salt Farm Foundation noted that despite western Europe still receiving occasional plentiful rainfall, its salt-tolerant “traditional” crops have a limited market penetration.

As the effects of climate change intensify in Europe, we must make more choices to guarantee the agricultural sector’s best future.

Modern halophytes raised by Seawater Solutions and hardy salt-tolerant plants researched have demonstrated that a different perspective on water may hold the key to a solution.