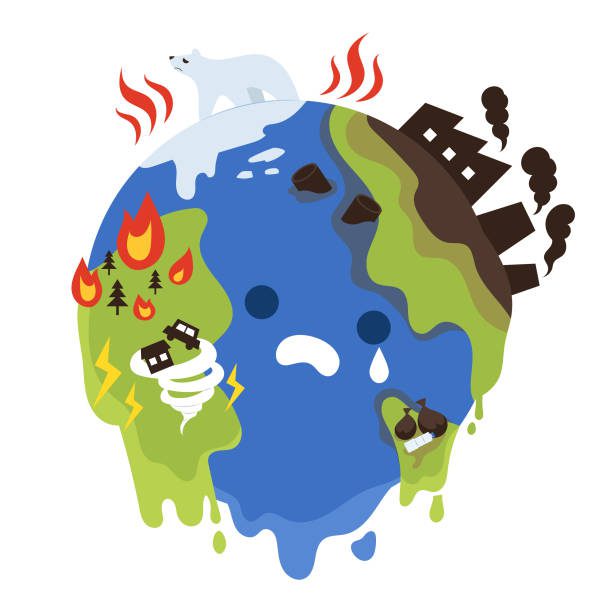 Changes in the Earth’s weather patterns and global warming are both caused by contemporary climate change. Climate change is not a new phenomenon as it has been initiated with the inception of the world. But the contemporary changes are more speedy and caused by unnatural reasons.

Expanding deserts, heatwaves, and wildfires are the common outcomes of climate change. An increase in temperature in the Arctic has caused melting permafrost, glacial retreat, and sea ice loss.

The higher temperatures have been causing extreme weather conditions and changes. Like more intense droughts, severe storms, and other extreme conditions.

Environmental changes in forests, mountains, deserts, coral reefs, and the Arctic have caused many species to relocate or become extinct. According to the World Health Organization (WHO), “ The Greatest Threat to Global Health in the 21st Century is Climate Change.”

Global warming can be described as the unusual increase in the temperature of the Earth’s atmosphere. The Sun’s energy enters the atmosphere and heats the Earth with waves.

The thin layer of earth that traps the waves, has been thickened by humans by the emission of various gases like carbon dioxide and methane. The burning of fossil fuels also emits greenhouse gases, which increase the temperature of the Earth’s atmosphere.

The rapid hike in the temperature of Earth’s core has alarmed the whole world to control the emissions of greenhouse gases. According to environmental scientists, the emission of gases can be controlled, but it will have severe long-lasting effects that will remain for centuries.

Earth’s temperature is increasing rapidly with the passage of time. According to the report by National Geographic on climate change, “The planet is warming, from the North Pole to the South Pole.” Since 1906, the global average surface temperature has increased by more than 1.6 degrees Fahrenheit (0.9 degrees Celsius), even more in sensitive polar regions.

Threat to the Ecosystem

Icebergs are melting in polar regions, which could increase the sea level by between 10 and 32 inches by the end of the century, which would ultimately lead to severe storms and floods. Global warming is also a threat to the ecosystems of the world as it would force different species to relocate.

Some species would be successful in adapting to the different atmospheres, but some, like polar bears, won’t be able to survive and could become extinct.

Global Warming in the European States

A rapid increase in temperature has been recorded in different regions of the world, especially in European states. Severe heat waves hit France, Spain, Italy, England, and Australia.

Increasing temperatures across Europe have caused hundreds of heat-related deaths and wildfires. Last month, France, in addition to Spain and Italy, was hit by the heat wave.

Two months ago, France experienced its hottest weather. Two large fires that were sparked in the Bordeaux region of France destroyed more than 24,000 acres of land and forced more than 14,000 people to evacuate.

Spain experienced a scorching heat wave, causing an overall death toll of 360 by heat stroke and forest fire in various regions of the country.

In the past week, 659 people in Portugal died due to heat-related issues, including the death of one pilot of a firefighting plane that crashed during an emergency situation.

Britain got its first extreme heat warning by the Met Office this week when temperatures in different regions of the country soared as high as 104 degrees Fahrenheit, which was a record temperature in the history of Britain.

Greece faced a violent wind storm and soaring temperatures that caused the wildfire to spread more quickly. According to the officials, 70 incidents of fire were noticed on a single day.

Last week, the northern region of Italy along the country’s longest river, The Po experienced a severe drought that affected the country’s agricultural output with a 30% decrease in production.

There is no one exact approach to stop or slow global warming, but each and every individual, state, tribe, and family have to cooperate with each other to save the planet from overheating. Experts have devised some important strategies to mitigate the effects of global warming.

We should move on to renewable (wind and solar) sources of energy for daily usage. Governments should introduce electric vehicles or mass transit vehicles so that the usage of personal cars can be reduced.

Control the Emission of Greenhouse Gases

Aforestation can also mitigate the effect of carbon emissions and ultimately help in reducing the Earth’s temperature. The government should take these measures into consideration so that the temperature of the Earth becomes stable and feasible for living.