Democracy of Dictator By The Green Book 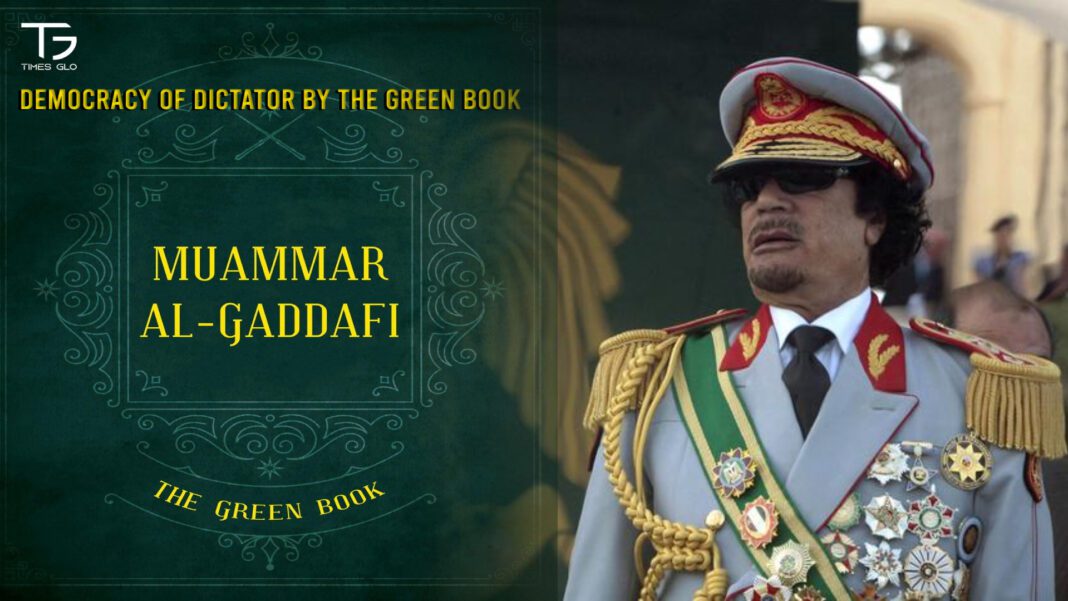 The “mad dog of the middle east”, named by US president Ronald Raegan, the former Libyan leader Muammar Gaddafi went on to write The GREEN BOOK. According to the book, The capitalist world of today has only given parliamentarians, the right to analyze and comment on the optimum system of government and social hierarchy.

Always denouncing and censoring the comments made by communists and other newly founded political systems, on how a state should be run.

Nonetheless, this status quo was challenged by Col. Muammar Gaddafi, the dictator of Africa’s oil-rich Libya. As the showman and unique individual he was, didn’t shy away from commenting on the optimum system of governance.

This little book, according to Gaddafi presented the ultimate solution to the political and economic problems of the whole world. In the book, he appears with the confidence of a philosopher who has studied anthropology for decades.

The book was published in three parts. In part 1 of The GREEN BOOK, Gaddafi derives logic to reject the popular system of democracy. He declares that the greatest dictatorships in today’s world are the parliaments.

“A parliament is originally founded to represent the people, but this in itself is undemocratic as democracy means the authority of the people and not an authority acting on their behalf”, he writes. He goes on to say that the mere existence of a parliament means the absence of people.

He goes on to justify his claim that the victory of a candidate having 51% votes is a dictatorship over the other 49% people, which destroys the basic element of democracy.

The basic sovereignty of the masses is usurped by the elected candidate, who remains out of the reach & influence of the masses who elected him. Furthermore, the parliamentarians are endowed with a special sacredness and immunity, denied to the masses.

Thus, he rejects multi-party and single-party parliaments. Furthermore, he also rejects the Communist approach of the rule of one class destroying all other classes. A working-class that destroys all other classes, will eventually give rise to further classes in itself with time.

In addition to this, he draws an analogy between multi parties’ parliament and a group of tribes fighting to gain supremacy. The foremost aim of any political party isn’t the development of the state, but rather taking power.

Thus, in this political struggle, the masses are the ones to suffer. They are given a false notion of their representation, which in fact is the representation of a minority, the political party.

The constitution also doesn’t escape from his diligent criticism. Colonel Gaddafi considers the constitutions to be a major problem in today’s world, declaring that there is no man-made law. The essence of man is the same everywhere, then how come there be different laws in different populations?

This paradox proves that manmade law is dysfunctional and doesn’t guarantee security and peace. The changing of the constitution with every different political party in government proves the hypocrisy of man-made law.

The ultimate goal of such a constitution is to subdue other people & achieve the interests of a particular political party. According to him, the only source of law is religion and tradition.

The laws derived from constitutions are full of physical penalties directed against human beings, while tradition & religion contains few such measures.

As an alternative to the parliaments and parties, Gaddafi proposes the system of People’s General Congresses and People’s Working Committees. A system that is void of any political parties or political drama.

There are Basic General Congresses established in each district, the members of which are the local citizens, who then select a Basic Working Committee. This Basic committee is the administrative unit & replaces the traditional government in that particular district.

These two organizations then, meet annually or periodically to manage affairs of the country and draft the working principles & guidelines, which are then forwarded to Basic General Congresses and Basic People’s Working Committees. Thus, the people, themselves are in control of the affairs of their district and country, rather than their representatives. This system of governance is represented in the schematic diagram below.

The Solution to the Economic Problem

Thus, in both cases, the citizen isn’t working for himself under his own terms. Thus, the man is a slave in both systems according to Gaddafi. He declares that a man should only work for himself.

The nationalization of industries is also mentioned in this part. He regards the wage system to be the basic problem, replacing it with partnership in the manufacturing of products. In addition to this, the book describes it as completely unethical for any individual to use the need of someone else.

Thus, Gaddafi declares it unlawful for any person to acquire wealth/property more than his needs. “It’s against the ethics that a person builds a house, other than his to use for rent. For, in this case, he is exploiting a basic necessity of other people”, he writes.

The necessities of life; House, car, and clothes for oneself are thus solely his right and property, but anything other than his own is exploiting the needs of somebody else.

In addition to this, the book abolishes the servants, declaring it unlawful and unethical for one individual to use anyone else as a commodity.

Commenting on the press, Gaddafi says that a newspaper doesn’t represent the opinion of society, rather it’s a representative of a segment of society; mostly the owners of that particular newspaper. According to him, the newspaper can only be issued by the Basic People’s Working Committees, comprising all groups of society.

The Social Basis of the Third Universal Theory

THE GREEN BOOK also explores Nationalism, Tribalism, and Globalism. It also comments on women’s role, arts, sports, and the socioeconomic factors of society, which can’t be explained diligently within this article.

Nonetheless, Gaddafi’s solution to democracy is quite similar to the 18th-century French Philosopher Rousseau who also focuses on individual freedom & sovereignty.

It is also worthwhile to note, that Gaddafi implemented this system and maintained a stable rule over Libya for 40 years.

He drastically changed the social-economic-political paradigm of his people, modernizing the country to the extent of providing adequate housing, electricity, education, jobs, and gender equality to the masses.

Through his firm understanding of tribalism & social factor, he was able to keep together the different tribes leading them to great economic benefits, with Libya’s GDP even greater than U.S and Europe during the 80s.

Though some people attribute Libya’s growth & stability to Gaddafi’s strong use of force & country’s oil reserves. Nonetheless, it’s a huge feat accomplished by the Colonel to rule such a delicate federation of tribes & propel his people to immense socio-economic development.