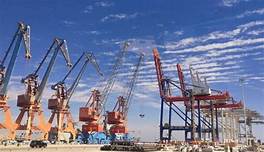 The Chinese leaders have been working on Machiavelli’s secret of rising to power for the past few decades, in letter and spirit. BRI (previously known as One Belt, One Road) didn’t just come into existence in 2013. Rather it was just formally launched in the global arena. The Chinese premier of the late twentieth century famously said: “hiding capacities & biding time”. The Chinese have been working on this rhetoric for a long before finally unveiling it to the world. BRI is a tool for achieving Hegemony. The definition of hegemony is the same, but have different understandings. An attack on the American interest is an attempt to confront the American Hegemony. Fair enough. China a concealed nation has limited “Chinese interest” before they expanded the spheres through BRI. So, to keep it simple, for establishing hegemony we need a reason to allow us to take whatever measure to establish hegemony. No other reason can be strong than defending the “National Interest”. Although there had been interventions by the US to thwart any rising tides, under the slogan of “Humanitarian Aid”. But even that doesn’t legitimize your actions, paradoxically are criticized for creating anarchy.

BRI and B3W are both models of acquiring/maintaining hegemony. The BRI officially launched in 2013, in an attempt to raise the living standards, build infrastructure, export energy from china to the developing countries. The grand vision was to integrate better communication between Europe and Asia and turn it into Eurasia. The objectives of the BRI seems evident, but are far more than just development. Although development in the under-developed countries is the major objective the BRI also have geopolitical objectives. The Chinese have been involved in the political affairs of host BRI countries. According to a document seen by The Times, from an internal government investigation, $7.6 million were transferred from China Harbor’s account at Standard Chartered Bank to close affiliates of Mr Rajapaksa’s campaign. 10 days prior to the elections, 3.7 million was distributed in checks. Moreover, the setting up of a military base in Djibouti is also questioning which economic benefit this brings to the people. The Chinese managing their military base in Djibouti port does not give infrastructure development, improve living standards and global connectivity. The rhetoric of Chinese leaders of the ‘win-win’ situation created by BRI is challenged by their own deeds. The Hambantota port which failed to generate revenue was taken by the China merchant under 99 year’s lease. But why buy a failed port, as it could not benefit economically. The only answer to this is the “strategic location” of the port. It can help china administer the trade, setting a strong foot in the indo-pacific.

BRI is famous for giving debts to vulnerable countries, which cannot return the loan. As John Adams said: “A way to subjugate a country is through either the sword or debt, China has chosen the latter”. The case of Hambantota port is a clear example of china’s vision behind giving debt to vulnerable countries. Moreover, the BRI is also a threat to Climate change, exacerbating the situation by the power projects it is developing under BRI. Only in Bangladesh, China is to set up 12 coal power plants under BRI. The same is the case with other countries, which are getting power under BRI. Although China has announced that it will comply with the targets set in the Paris climate agreement, which seems to only work within the national boundaries of China. This implies that China is not working for sustainability. The ‘win-win’ rhetoric need to be analyzed from a different dimension. The Chinese are providing loans under BRI, the first condition might be that the country returns the loan timely, it is a ‘win-win’ situation for both. The second condition is if the country failed to return the loan to China. China will take over, as it did in Hambantota. So now this is not a ‘win-win’ situation rather a zero-sum game. In both cases, China is better off. With massive solutions, BRI brings massive problems along. Climate change & bio-diversity have only exacerbated with progressing BRI.

There has been much criticism on the BRI for the debt trap, unsustainable practices, closed-door agreements, ecosystem destruction, political involvement, data theft but sadly nothing has been done yet but statements. The G7 Summit concluded by providing an alternative to the Chinese BRI. The G7, especially America, came up with the idea of B3W (Build back better World). The B3W is said to be worth $40 trillion, with the main area of focus Climate, Health and Health security, digital technology and gender equity and equality. The B3W looks appealing in papers, but the fact is, it is still in papers. The B3W is just announced and have nothing in terms of implementation yet.

The Biden administration is ambitious to contain China. The march of China to the throne of the World is making the king act pre-emptively. B3W is aimed to bring sustainable and robust changes to developing countries. The G7 backs the B3W, but there isn’t any coherent interest that can keep them together throughout. The British premier, Boris Johnson said: “When it comes to China, nobody wants to descend into a cold war. EU enjoys comprehensive trade ties with China which was its top trading partner in 2020, surpassing the US”. The point here is that the EU countries are economically attached to China, and they don’t want to see China drown. The liberalist theory explains the relation between China and the EU. The paramount economic interdependence needs cooperation to survive. The EU will never wish of getting into confronting position with China, as it will harm their own interests. Whereas the US see the rise of China from a different standpoint. The military and strategic implications with raising influence in politics of BRI countries are more pertinent to the US. The rising strategic influence of China in the South China Sea is concerning the US hegemony in the Indo-pacific region. China has disputes over territorial claims with 18 countries of South Asia and South-East Asia. The militarization of the South China Sea is becoming problematic for the US allies in the region. The US-made the AUKUS alliance which is also an attempt to contain China.

BRI is notorious because of the practices it follows and the implications it has on the global level. The transparency and merit of projects under BRI can make them more acceptable and productive. The B3W is aimed to contain rising Chinese influence. US is on the front lead to confront China whereas the allies under the US seems confused. BRI is an attempt to create hegemony whereas B3W is an attempt to save hegemony.