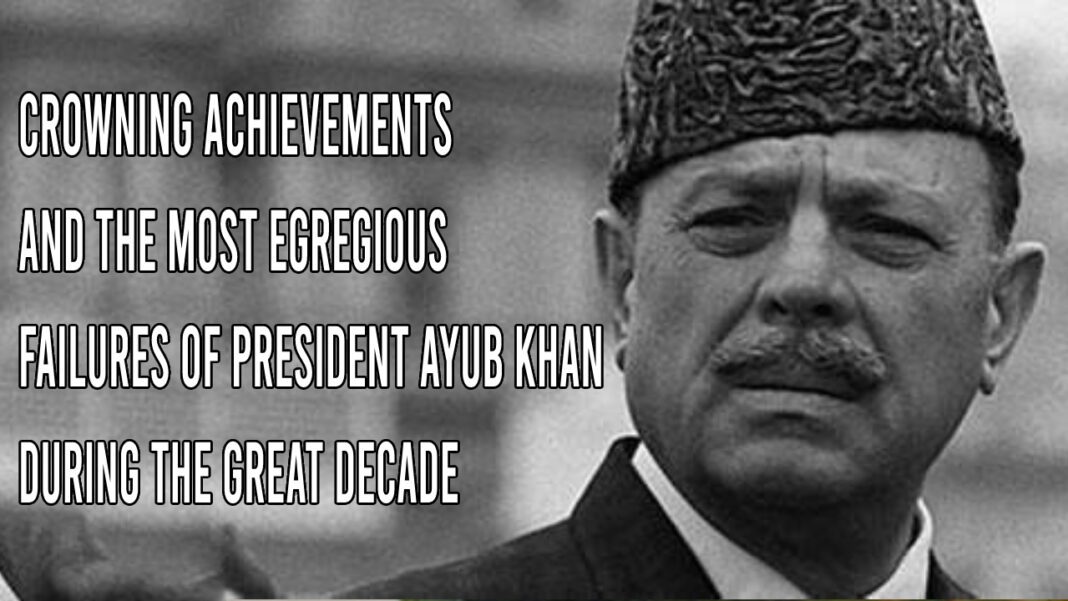 Although, the era of President Ayub Khan witnessed high growth rates and economy boomed at dramatic speeds but due to the concentration of wealth this high growth had not any impact on ordinary people.

The era of President Ayub Khan from 1958 to 1969 is the most important time in the history of Pakistan since independence. The era was termed as the great decade. During this time a lot of new things happened in Pakistan and for the first time marshal law was imposed in the country, abrogating the constitution of 1956.

Industrialization started in the country and Pakistan got a lot of new industries, economy was growing with high growth rates and many other reforms were introduced to lead the country towards progress. However at the same time Pakistan was faced with a lot of failures as Ayub government made a lot of blunders as well. This essay aims to elaborate the crowning achievements and the most egregious failures of President Ayub Khan during the great decade.

During Ayub era Pakistan achieved a lot of success and economic growth was stellar. President Ayub Khan laid the foundation of industries in Pakistan. High growth rates were visible in province Punjab and City of Karachi. Growth rates in terms of both agriculture and manufacturing were twice.Pakistan received its first automobile industry and a cement industry.

Ayub Khan put Pakistan on the way to economic growth and this growth gave rise to industrialization and manufacturing. President Ayub Khan also introduced some agriculture reforms to boost the agricultural production.

On Jan 18, 1965, the New York times wrote that “ Pakistan may be on its way to economic milestone that so far has been reached by only one other populous country, the United States”,  a view which was endorsed by the times from London a year later, stating that, “ the survival and development of Pakistan is one of the most remarkable examples of state and nation building in the post war period”.

These reforms were introduced to stop the manipulation and exploration of peasants from the the feudal system and landlords. As a result of these reforms four million hectares of land were released for public acquisition which was sold to civil and military officers. This increased agricultural growth and brought a green Revolution in Punjab..

In a year marked by tight foreign exchange constraints, the economy unusually benefited from monsoon rains; agriculture led the economy in growth with perhaps a 10% increase, as against the GNP growth of about 8%. Tight control on prices slowed the inflationary trends that were an important problem in 1967, and exports continued to show impressive growth with an increase of about 8-9% over 1966-67.

West Pakistan led the way in this economic performance which the Aid Pakistan Consortium members labeled ‘Outstanding’ but it was a good year for east Pakistan’s agriculture as well.

In case of industrialization, during the tenure of President Ayub Khan 17 new jute mills were opened which helped increase in the production of processed jute by 15-18% . Cotton textile production would go up by 13-15% , which can be termed as a crowning achievement during the great decade. During that time cement production improved and many fertilizer plants were being built.

China and Russia aided many projects in the heavy industry and power fields. In the field of construction and infrastructure development , first time in the history of Pakistan construction of dams started and the largest project in this field that is Tarbela project was initiated. Another hallmark in the infrastructure development was the plan of a new Capital city for Pakistan which would be the first planned city since Pakistan’s independence.

Water distribution has been a grave problem among Pakistan and India. Indus River is the main source of irrigation for Pakistan which rises in the Tibet autonomous region of China flowing through the disputed region of Kashmir and then enters into Pakistan. This river is joined by many other water tributaries.

After the expiration of a standstill agreement of 1947 India began withholding water from the canals that were flowing to Pakistan. Negotiations continued but neither side came to a compromise. In 1951 it was suggested that India and Pakistan should work jointly to develop Indus River system with the help of world bank.

This was a great achievement for Ayub Khan government as they solved the pending issue speaking of which was a challenging issue for Pakistan. According to Indus waters treaty the waters of three rivers Indus, Jehlum and Chenab were given to Pakistan while three rivers Ravi, Sutlej and Bias were given to India.

With the help of this agreement Pakistan received a massive aid from World Bank member countries to build link canals, Barrages and dams. This helped improve the irrigation system of Pakistan.

These are the crowning achievements of President Ayub Khan and his government. Along with these hallmarks there were some loopholes in the governance of President Ayub Khan as well. After all he was a military dictator. Although he achieved a lot during his tenure but he also faced many failures and made some blunders that weakened the country’s unity.

Understanding the efficacy of the system one might also come to know that economic realities are less glamorous if not bad. A critical review of president Ayub Khan’s policies suggest that his primary goal was just to sustain his regime.

He was against the democracy and termed the politicians as immature and incompatible to rule or govern the country. Moreover they are illiterate and cannot be trusted. He introduced the system of basic democracies which consisted of almost 80000 eighty thousand constituencies.

Thus Ayub Khan’s intention was not met properly in this regard and he failed to shift powers on local levels and ultimately this was his egregious failure.  It was basically a demise of democracy which restricted the right to vote. Politicians were imprisoned and were accused of being responsible for internal chaotic situation. Many bureaucrats were expelled from bureaucracy and many popular politicians were disqualified.

Economic growth was stellar but understanding the nature of system at that time one might come to know that the economic growth could not overcome poverty and unemployment. There was unequal distribution of wealth which resulted in the concentration of wealth. All the wealth was just  limited up to 20 families.

Ordinary people had nothing to do with the GDP growth. A critical report by none other than, Dr Mehboob ul Haq, the then deputy chairman of planning commission, revealed that a coterie of just twenty families controlled the two thirds of industry and three fourth of the banking. The so called economic growth was actually a macroeconomic growth.

With the passage of time the gap among industrialists and ordinary people increased and it became severe over time. The rich were getting more and more rich while on the contrary the condition of poor was getting even worst.. Ayub Khan brought foreign experts for shaping the economic policies of Pakistan, these foreign experts were unaware of Pakistan’s economic system and could not understand the efficacy of the system. This eventually resulted in the income inequality.

Looking at the economic growth, people praise Ayub Khan for this wonderful success but there is one thing to remember that only one thing can be credited for economic growth and industrialization process and that is foreign aid. Inflow of foreign capital helped in bringing industrial boom in Pakistan. Foreign aid was more than twice of loans.

This dependency on foreign aid made Pakistan useful to aids and loans. Pakistan could not stand on its own feet even after the high rates of economic growth. Pakistan always relied upon others for its survival because Ayub Khan government failed to make Pakistan a self sufficient country.

A person having good intentions cannot succeed every time. Same is the case with Ayub Khan. He introduced land reforms to help landless peasantry. But as always happens, the feudal  and landlords showed their skills and transferred their extra lands to their cousins and brothers. In this way the land remained in the same family and thus land reforms failed.

Ayub Khan achieved a lot of things and put Pakistan on the way to the prosperity but we all know that there is no perfection. There are loopholes in policies of every leader. Sometimes it is impossible to achieve all things at a single time. However there are some fields where he made mistakes willingly like that of behavior with east Pakistan and refusal of parliamentary democracy.

However he took some bold steps as well. He was a military dictator with liberal ideas. So he did things right and wrong as well. In a nutshell, we can conclude that Industrialization, economic growth, land reforms, Indus water agreement, new dams and improvement of irrigation system were the achievements of President Ayub Khan while the gap between rich and poor that is the concentration of wealth, refusal to parliamentary democracy, inability to handle the issues of east Pakistan can be termed as egregious failures of Ayub Khan.