The Travels of Ibn Battuta 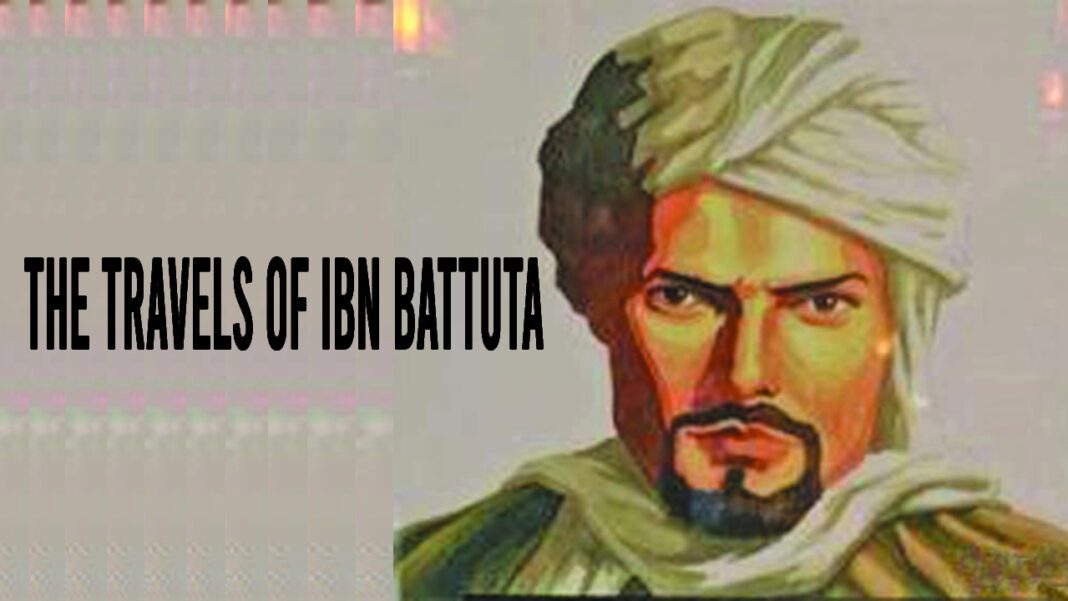 After he finished the Rihla, Ibn Battuta almost completely disappeared from history. He may have been a judge in Morocco and died around 1368, but we don’t know much else about him. It looks like the great traveler was finally happy to settle down after a lifetime of voyage.

Ibn Battuta was born in Tangier, Morocco, to a family of Islamic judges. He grew up in this family. At 21 years old, he left his home country and went to the Middle East. He wanted to finish his hajj, which is a Muslim pilgrimage to Mecca, but he also wanted to study Islamic law along the way.

“I set out alone,” he remembered later. “I had neither a traveling companion with whom I could find comfort nor a caravan that I could join. A strong desire drove me from inside. A long-held desire to see these famous holy places.”

In Egypt, Ibn Battuta studied Islamic law and went on tours of Alexandria and Cairo, which he called “the most beautiful and splendid city in the world.” He then went to Mecca, where he took part in the hajj. He could have stopped there, but after he finished his pilgrimage, he decided to keep traveling around the Muslim world, or “Dar al-Islam.”

Ibn Battuta’s inspiration was a dream in which a big bird took him on its back. That bird flew him a long way to the east, and then left him there. A holy man told Battuta that his dream meant he would travel all over the world, and the young Moroccan set out to make the dream come true.

The next few years were full of travel for Ibn Battuta. He joined a caravan and traveled through Persia and Iraq. Later, he went to what is now Azerbaijan, which is to the north. After he stayed in Mecca for a while, he walked across Yemen and took a boat to the Horn of Africa. From there, he went to Mogadishu, a city in Somalia, before crossing the equator and exploring the Kenyan and Tanzanian coasts.

Ibn Battuta made a plan to go to India after he left Africa. He hoped to get a well-paying job as a “qadi,” which is an Islamic judge. He went east in a roundabout way, cutting through Egypt and Syria first, and then sailed to Türkiye.

As he always did in places where Muslims were in charge, he used his status as an Islamic scholar to get help from the locals. During his travels, he received many nice clothes, horses, and even concubines and slaves as gifts.

Batuta left Turkey and crossed the Black Sea. He then went to the land of a Golden Horde Khan named Uzbeg. He received welcome at Uzbeg’s court, and then he went to Constantinople with one of the Khan’s wives. Battuta spent a month in the Byzantine city. He went to the Hagia Sophia and had a short meeting with the emperor. He had never been to a big city that wasn’t Muslim, so he was shocked by the “almost infinite” number of Christian churches inside.

Batuta then went east across the Eurasian steppe and through Afghanistan and the Hindu Kush to get to India. When he got to the city of Delhi in 1334, a powerful Muslim ruler named Muhammad Tughluq hired him as a judge. Battuta worked in the comfortable job for a few years and even married and had kids.

But he eventually became afraid of the unpredictable sultan, who was known to hurt and kill his enemies, sometimes by throwing them to elephants with swords attached to their tusks. In 1341, Battuta finally had a chance to get away when the sultan sent him as an envoy to the Mongol court in China. Still looking for adventure, the Moroccan led a large caravan full of gifts and slaves on its way.

Battuta’s trip to the Orient turned out to be the most dangerous part of his long journey. During their trip to the coast of India, Hindu rebels bothered his group. Battuta was later kidnapped and robbed of everything except his pants. He made it to the port of Calicut, but on the day before a trip across the ocean, a storm blew his ships out to sea and caused them to sink, killing many people on board.

Battuta was stuck and embarrassed after a series of bad things happened to him. He didn’t want to go back to Delhi and face the sultan, so he chose to sail south to the Maldives, an island chain in the Indian Ocean. During the next year, he stayed on the beautiful islands, ate a lot of coconuts, took several wives, and worked as an Islamic judge once more.

Battuta could have stayed in the Maldives for even longer. But he had a fight with the people in charge and had to go back to China. After making a stop in Sri Lanka, he went through Southeast Asia on merchant ships. Four years after he left India for the first time, in 1345, he arrived in the busy Chinese port of Quanzhou.

Battuta called Mongol China “the safest and best country for a traveler”. He praised its natural beauty, but he also called its people “pagans” and “infidels.” Worried about the strange customs, the religious traveler stuck close to the country’s Muslim communities and didn’t say much about cities like Hangzhou, which he called “the biggest city I have ever seen on the face of the earth.” Historians still argue about how far he went. But he said he went as far north as Beijing and through the famous Grand Canal.

China was the first stop on Battuta’s last journey. When he got to the end of the known world, he finally turned around and went back to Morocco. In 1349, he arrived in Tangier. Battuta’s parents had died by that time. So, he only stayed there for a short time before going on a trip to Spain. Then he went on a long trip across the Sahara and into the Mali Empire, where he went to Timbuktu.

Battuta never kept a journal during his travels. But when he finally moved back to Morocco in 1354, the country’s sultan told him to write one. He told Ibn Juzayy his story over the course of the next year. The result was an oral history, “A Gift to Those Who Ponder the Wonders of Cities and the Marvels of Traveling.” This is better known as the Rihla (or “travels”).

Even though it wasn’t very popular when it was written, the book is now known as one of the best and most detailed books about the Islamic world in the 1400s.

After he finished the Rihla, Ibn Battuta almost completely disappeared from history. He may have been a judge in Morocco and died around 1368, but we don’t know much else about him. It looks like the great traveler was finally happy to settle down. He settled down after a lifetime of going from place to place.