5 Things You May Not Know About Erwin Rommel 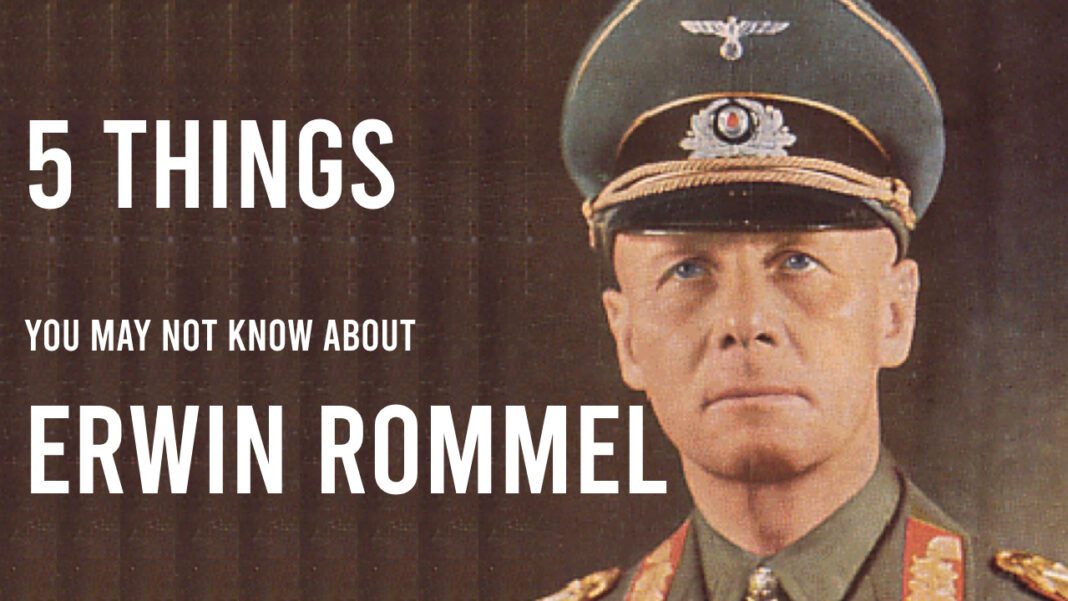 Johannes Erwin Eugen Rommel born on 15 November 1891, was a German field marshal during World War II. He served in the Wehrmacht of Nazi Germany and also served in the Reichswehr of the West Republic and the army of Imperial Germany. Erwin Rommel friends nick-named him Desert Fox because of his audacious surprise attacks.

Erwin Rommel was born in Heidenheim in the Kingdom of Württemberg, a part of the German Empire. He had one older sister who was an art teacher. One of his three brothers, Manfred died during infancy. At the age of 18, he joined Württemberg Infantry Regiment No.124 in the year 1910. He studied at the Officer Cadet School.

Rommel graduated in the year 1911. He was commissioned as a lieutenant in 1912. He got posted to Ulm in March 1914 to the 46th Field Artillery Regiment as a battery commander. During the World War 1, he fought in France, Romanian and Italian campaigns.

5 Things You May Not Know About Erwin Rommel

Erwin’s family lacked much of a military tradition

Erwin has an interest in mathematics and engineering, he co-built a full-size glider at the age of 4 and disassembled and reassembled a motorcycle. He start working at an airship factory near his hometown but his father urged him to consider the military instead. He received an acceptance to infantry as a cadet officer.

Rommel Was a Devotee of Hitler

His devotion to Hitler was indubitable. During World War II, he was appointed as commander of the troops guarding the Fuhrer’s headquarters and became personally known to Hitler. When Hitler took power, Erwin approved of his militarization plans. He called Hitler the “unifier of the nation”. Hitler gave him an autographed copy of Mein Kampf.

Rommel was transferred to North America in 1940 to help struggling Italians fight the British. He reserved the tide, pushing the British back hundreds of miles in a series of intrepid attacks, for he received the nickname, Desert Fox.

He also got promotion to the rank of field marshal after this. In 1942 the British halted his advance near El Alamein, Egypt. Rommel prepared to retreat but Hitler sent a letter to him telling him not to yield “even a yard of ground.” He further said:

“As toy your troops, you can show them no other road than that to victory or death”.

Rommel disobeyed Hitler’s order out of the fear that his force would be annihilated. Also, he disregarded the order directing the German Generals to execute Allied commands caught being enemy lines.

D-Day refers to the landing of Allied forces on the beaches of Normandy, France on June 6, 1944. Erwin Rommel inspected Germany’s defense along the Atlantic coastline in the year 1943. He found them very vulnerable.

As per his directions, the Nazis built fortifications, flooded coastal lowlands, and place a huge amount of barbed wires, mines, and steel girders on the beaches. He also wanted the tanks to be ready to prevent the Allies from establishing a bridgehead.

When D-Day was launch, Rommel’s prediction for Germany’s position came true. But Hitler still not consider to negotiate with the Allies.

Rommel’s involvement in this plot to kill Hitler remained unknown. According to his widow, he oppose the assassination plan but wants the arrest of Hitler. His name also came up during the subsequent Nazi dragnet, promoting Hitler to arrange for his death.

Erwin served with distinction in World War I. He fought on the western front in Italy and France. After his success in Battle of Coporetto he got promotion to the rank of Capitan in January 1918.

Erwin also participated in the suppression of the uprising by revolutionary communists in the German cities of Schwabisch-Gmund and Lindau, in doing so he became popular avoiding bloodshed and resolving conflicts. He also served as an instructor at Dresden Infantry School from 1929 to 1933.

In 1949 Erwin Rommel commanded the 7th Panzer Division where he demonstrated the skill of the new tactic of blitzkrieg. He also demonstrated a tendency towards self-promotion and a lack of logistical expertise.

In February 1941 he took command of German forces in North America where he earned the title of Desert Fox. In 1943, the Allies defeated his troops in Africa, he then returned to Europe to oversee the defense in Normandy and he held this post until he died in 1944.

On October 14, 1944, Two generals form Hitler’s headquarter visit him and told about charges of involvement in Hitler’s assassination conspiracy.

They offered him three options, he could choose:

Rommel opted to commit suicide as in this case the government would claim that he died a hero and bury him with full military honours. The germen general had bought cyanide capsules with him for this option.

His death was reported to the public as a heart attack or a complication of a skull fracture. To strengthen this story Hitler ordered to observe an official day of mourning. He was given a state funeral which was held in Ulm. His graveyard is located in Harlingen.