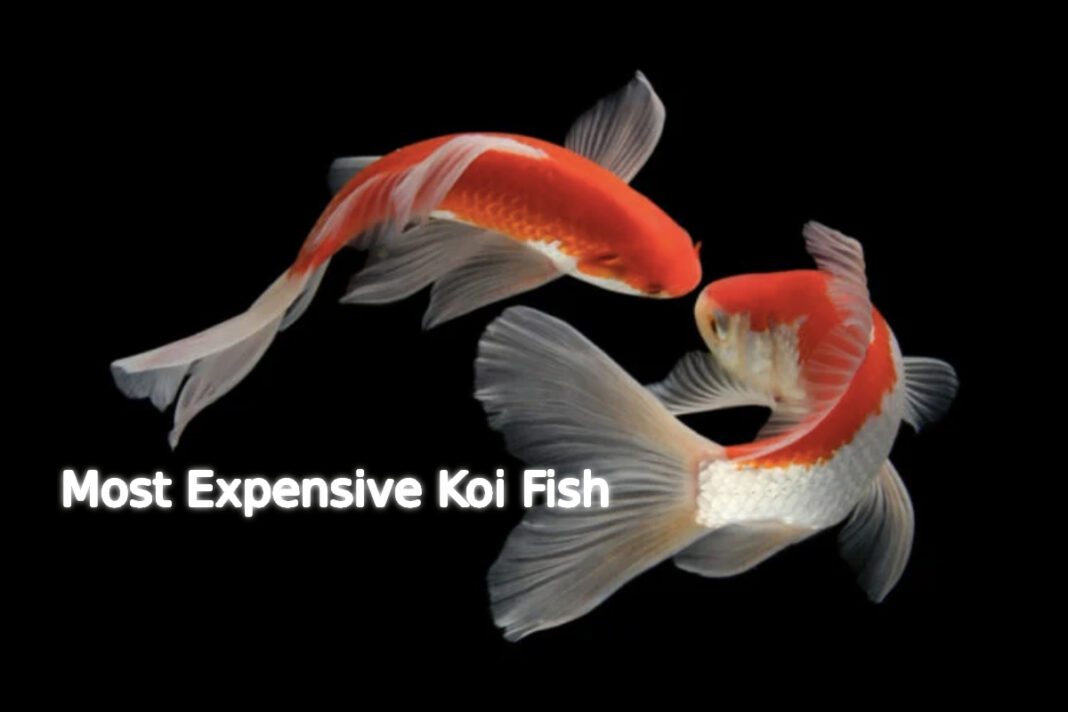 Kikokuryu, Ogon, Showa are some of the most expensive koi fish in the world. $1.8 million, the expensive koi ever sold. Breeding quality and importing outside makes them expensive.

Koi fishes are the type of crap which are found all over the world. Carp is a species of oily fish from the family of Cyprinidae. They are special due to their color and lineage. They are also kept for decorative purposes in ponds or water gardens.

You must be wondering why they are so expensive.

Let’s have a look at the most expensive types of koi fish and why are they so expensive.

Most Expensive Koi Fish Ever Sold

Kikokuryu is among the most attractive koi fish. It has a metallic silver color body with splashes of bright orange. There are more than 100 varieties of Kikokuryu fish, among these, the popular ones are Taisho Sanshoku, Showa Sanshoku, and Kohaku. You might be able to get it for a few hundred dollars but a good size, color, and lineage can easily fetch over $2000.

Beni Kikokuryu is a Doitsu and is a metallic Koi. It has an orange or red pattern. It comes in a variety of colors like white, black silver, and blue. Also they can change color according to temperature. They are also known for their lustrous body. The price of a Beni Kikokuryu depends upon its skin luster and may be somewhat around $2000.

Ogon is a solid, metallic single-colored koi crap. They are one of the most friendly koi crap. Ogon is also famous for its lustrous sheen and brilliant shade of gold and black lining around each scale. Ginrin, Platinum ogon, and Matsuba are some of the varieties of Ogon. As the Ogon fish comes in different varieties, the price of a Ogon fish can hence go up to $200 per fish.

Asagi is one of the oldest Koi. It has brilliant shimmering blue scales and brilliant luminescence. Asagi fish undoubtedly has attractive diamond-like patterns and their head is marked with grey, white or red circles. Asagi which have more pigmentation than usual is called Hi Asagi. Small asagi usually sell at a rate of $100 while large asagi at the rate of $3000.

Tancho is beautiful snowy white koi with a single red-orange color patch at the top of their heads. It has a flawless and unblemished body. Tancho fish also comes in three varieties. Because of its rarity, a perfect Tancho is very expensive. The price of Tancho is $3000.

Doitsu koi have no scales except for an enlarged scale on the lateral line and two linings running alongside the dorsal fin.The most common varieties of Doitsu include white, black, and orange color Doitsu. Because of the different colors, the Doistu can easily fetch upwards of $3000.

Showa fish has three-tone colors and unique patterns of patches and swirls. It usually displays all three colors on its head. You can easily identify a Showa fish by the black pattern on it’s head. Showa koi is a combination of white, black, and orange-red. Prices for Showa Koi’s vary depending upon size and color. Because of the unique patterns and colors the Showa fish has a varying prices. You may be able to find one Showa for $200 but the price of the best Showa is about $16000.

Sanke means “tri-color”. It is a three-colored koi. It usually shows two colors on its head, white and red. Alternatively you can also identify it as a white koi with a red pattern and black marking. A small sanke has a price of about $200 but if you plan to buy a big sanke koi then the price should be somewhat $6000.

Kohaku is a Japanese species of fish with red and white coloring. It is the most expensive koi fish ever sold with a price of $1.8 million. This Kohaku was a nine-year-old fish, named S Legend measuring over 300 ft. in length. Owned by a Taiwanese woman, Miss Yingying. Even though $1.8 million is above the average price of Kohaku koi, it’s not unheard of for people to pay over $16000.

Most Expensive Types of Koi Fish

Some of the most expensive types of koi fish are:

Why Are Koi Fishes So Expensive?

Here are some of the reasons why they are the most expensive koi carp ever:

Breeding a normal koi carp is easy but breeding a quality koi requires knowledge and expertise. It requires years of experience so that is whys a good koi crap is not found abundantly. And this makes them expensive.

If you breed koi crap randomly you will not get the desired color and patterns in the offspring. The parent’s craps are selected after observation. Breeders also use their knowledge to select them as parents.

Few Koi’s Are Raised to Adults

Despite having a high hatching rate, not all koi females are selected for breeding. A breeder selects a koi only when he notices a good indication of color and pattern. A 1kg female koi can lay up to 100,000 eggs. This is another reason for being expensive.

Almost every kind of koi fish is imported from Japan. Buying the most expensive Japanese koi fish and shipping theme into your country certainly increases its price. Also the important has to pay a handsome amount of tax.

Japanese people believe that koi fish can bring good luck and fortune to any home .Their beautiful appearance and magical sound of water undoubtedly can cheer up your mood and reduce your depression. That is why koi are most popular in Japan.