This article tries to answer a few questions regarding no resistance of the Afghan National Army and how the international community apprehends the current situation in Afghanistan. The question of recognition and the concerns are presented specially of the regional players in the current scenario. Finally, the article is concluded on this optimism regarding the Taliban

A 20 year of US incursion ultimately culminates on 15th of August 2021 when the US officially withdrew her forces from Afghanistan. An imperialist venture of US in 2001 in the name of self-defense and so-called democracy begun after 9/11 and obliterated the whole of Afghanistan and shattered her from inside out in the former two decades. Taliban’s canny strategy of peace talks for settlement were taking place in Doha for the past 6 years starting from 2014 to the Feb 2020 Peace Settlement with Zalmay Khalilzad and March 2020 Agreement with Trump. Finally, Biden affirmed an official date of September 11 for withdrawal of forces from Afghanistan when seized the presidency.

US liquidated $ 85 million on Afghan National Army and trained it for the long span of 20 years yet it didn’t resist. survive and fight against Taliban and there was no considerable resistance seen when America was fleeing (apology, withdrawing). Why? The answer to this question is very simple and one shouldn’t blame only Afghan Army. It was never a national army as was always buttressed, sponsored and outfitted by American Dollars. The most vital prop of American Model Modern Army Synchronization is its Airforce, as was of Afghan Army until US was dwelling in Kabul. When US withdrew her forces, it inculcated all the other supporting and central features of its 20 years training including the Airforce, Intelligence and Contractors. Supply lines and logistical support were also desisted as it were not provided by road but by aerial routes which already retreated.

Sardonically, the leaders and commanders who should have motivated and leaded the army were either sailing to other countries or seeking refuge in their residences with their doors locked. Ashraf Ghani and General Dostum both fled to other countries who should be there on the leading front to motivate Afghan Army. Prior to fleeing, Ghani changed his defense, interior ministers, commanders and army chiefs rapidly perceiving the sitch aggravated and the front-line soldiers didn’t even know who their commanders are and from whom are they are getting orders. All this instigated the serious demoralization of Afghan Army. Secondly, the Political tactics of Taliban were incredible as they granted amnesty to everyone including all the rivals, soldiers and general public and negotiated with the soldiers not to fight, also kept the local warlords like Ismael Khan relaxed. So, this also persuaded the Afghan Army not to fight against the Enemy at the Gates. By taking leverage from the failed military strategy of Ghani’s government, withdrawal of American forces and by implementing good political tactics, Taliban very easily swept the victory in Kabul. 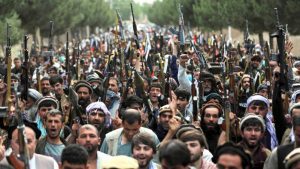 The question now evolves that what’s next for Afghanistan as Taliban have seized the power. Taliban are being unbelievably vigilant and careful so far as it was a matter of huge concern that they’ll present the same 1996-2001 model of their strict governance but they granted Amnesty to everyone as Zabeehullah Mujahid said in his press conference that we don’t want fight any more in Afghanistan and also want women to help us out in political affairs. Moreover, they have fully endorsed America in the evacuation process. Taliban are just 1 lac or so, they need internal as well as external legitimacy. For domestic legitimacy, they must provide security, ensure prosperity and political participation and incorporate their rivals also in the particular political framework which they are doing because military takeover doesn’t predict popular support.

Till now as portrayed by their reactions and foreign policy statements, every country in the region is prepared to recognize Taliban like China, Pakistan, Iran, Turkey and even Russia welcomed them but all these countries will not recognize Taliban so early because they need an argument to recognize them. International community needs assurances from Taliban obviously not regarding human rights and whatsoever but regarding their interests in Afghanistan. China will be concerned about BRI investment and Uighur Muslims not to be supported by Taliban. Pakistan will be concerned about TTP, Baloch Insurgents, CPEC and Afghan soil not to be used against Pakistan as was so during Ghani and Hamid Karzai’s regime. Iran will be concerned of Shia community in Afghanistan and other Western States will also be sharing somewhat similar concerns mainly revolving around the terror not to be exported from Afghan soil and terrorist Militants not to be provided safe heavens and sanctuaries in Afghanistan.

These assurances are given by Taliban as Zabeehullah Mujahid said in his first press conference on 17th August that Taliban wont allow Afghan soil to be used against any other country, you will not be harmed from Afghan soil and we don’t have any grudges (Reference to Transcript from Al Jazeera). But this is too early, international community will not so early recognize Taliban which is evident from the fact that FBR has frozen $10 million Afghan reserves and IMF has stopped $460 million. Gerry Rice, the spokesperson of IMF also said that IMF cannot give access of SDR to Afghanistan.

There is going to be a serious humanitarian crisis in Afghanistan in the upcoming days as World Food Program’s executive director David Beasley said that 14 million people in Afghanistan, almost one third of the total population, has no access to food. Another most important threat to Taliban regarding their legitimacy is Islamic State because Taliban will definitely stop all other terrorist organizations like TTP, Al Qaeda and other remnant radical Islamists but they can join IS which makes it a potential threat to Taliban because IS is a latent adversary of Taliban, America and even Pakistan.

So, all these threats are there for Afghanistan but as discussed earlier that the impression of  Taliban 2.0 gives us a hope and optimism that they’ll do well this time and although, dominated by Taliban, the government formed will be an inclusive government incorporating all the political communities of Afghanistan.