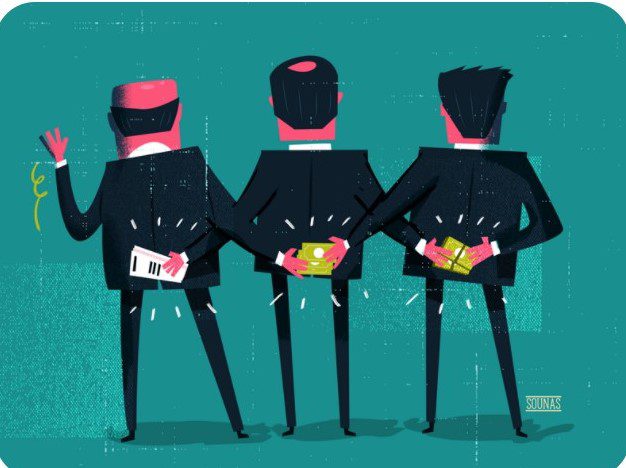 Corruption is a major problem, in developing countries. It impedes economic growth, weakens the rule of law, and undermines the legitimacy of institutions. Although it has been studied at a national level from different perspectives, there is a recent growing body of research on local corruption. As far as we know, these latter studies focused on corruption and its effects on votes. However, a further question arises as to whether there is a mimetic effect on neighboring municipalities?

The main focus of this study is the different forms of corruption and its consequences and costs to the environment, especially in resource-rich developing countries Corruption:

Corruption is a form of dishonesty or criminal offense undertaken by a person or organization entrusted with a position of authority, to acquire illicit benefit or abuse power for one’s private gain. Corruption may include many activities including bribery and embezzlement, though it may also involve practices that are legal in many countries. Political corruption occurs when an office-holder or other governmental employee acts in an official capacity for personal gain. Corruption is most commonplace in kleptocracies, oligarchies, Norco-states, and mafia states.

Corruption and crime are endemic sociological occurrences that appear with regular frequency in virtually all countries on a global scale in varying degrees and proportions. Individual nations each allocate domestic resources for the control and regulation of corruption and crime. Strategies to counter corruption are often summarized under the umbrella term anti-corruption. Additionally, a global initiative like the United Nations SDGs also has a target to substantially reduce corruption of all forms.

Corruption and the environment

Corruption is a serious problem and social ethics has a significant impact on all societies. It is a phenomenon that is globally widespread and can be generally defined as the use of public power to benefit a private interest. It is a complex and multifaceted concept with several and heavy complications for the economy and environmental sustainability. Despite the existing theorizations and descriptions of the political economy concerning environment/society interactions and widespread evidence of bribery and illegal exchange in natural resources management, nowadays, fighting corruption goes on widely ineffective, with serious consequences for environmental quality.

Corruption demoralizes government and weakens the whole endeavor of policy formulation and its implementation. It diminishes services and causes fiscal stress, but most of all it undermines trust and corrodes legitimate community expectations. Corruption takes many forms and is found in many contexts. This paper develops a framework for the analysis of corruption which identifies types, activities, sectors, and places (TASP). With the TASP framework identified or suspected corruption in any setting can be analyzed as a precursor to the controls and processes that are most appropriate for the control and modification of corrupt behavior, which ideally can enhance public sector performance. The TASP framework assists in pinpointing the nature, location, and context of public sector corruption, and illustrates more precisely where the risks of corrupt activity might arise. This paper demonstrates, with empirical work from New York City and the State of Victoria in Australia (Australia’s second-most populous state), that more precise classification and characterization of the nature and types of corrupt activity is an essential precondition to the development and design of targeted anti-corruption measures.

Widespread corruption may have roots in culture and history, but it is, nevertheless, an economic and political problem. Corruption causes inefficiency and inequity. It is a symptom that the political system is operating with little concern for the broader public interest. It indicates that the structure of government does not channel private interests effectively. The economic goals of growth, poverty alleviation, and efficient, fair markets are undermined by corruption. Corruption erodes political legitimacy and the protection of rights. Twenty years into the global fight against corruption, there has been progressing in both policy and research, but much remains to be done. Attempts to measure corruption – imperfect as they are – have exposed especially corrupt governments and industries, spurring reform toward transparency and more ethical dealings in the public and private sectors, but most governments still receive failing grades on the control of corruption. Our goal is to further understand the circumstances that contribute to corruption and the policies that can help to combat corruption, but there is no one-size-fits-all anticorruption program.

These interact to determine the levels and types of corruption in any given case. Corrupt practices such as bribery, nepotism, and influence peddling are informal institutions that frequently undermine formal institutions and are often pervasive and entrenched. Formal institutions, such as the political structure and the body of law and its enforcement, help shape culture, and attitudes toward corruption. A strong kleptocratic state may suffer financial hemorrhaging at the top, but very little day-to-day petty corruption. Where the state pretends to be strong by implementing numerous strict regulations, but the rule of law is weak, petty corruption will be rampant.

Situation-specific incentives influence choices when an individual balances costs and benefits to decide whether to offer, accept, or demand a corrupt exchange. A strong organizational stance against corruption, coupled with monitoring and proportional penalties, creates very different incentives from an environment in which corruption is tolerated or even encouraged. Low pay may need to be supplemented in some circumstances, but even some well-paid public servants and CEOs engage in corruption if the risks of detection and punishment are low.

The institutional setup of the country such as the characteristics of the political and judicial system determines the extent of corruption. In such a context, transparency has been described as a cure for corruption. Good governance including a broad commitment to the rule of law is crucial for environmental sustainability and is a way to put a stop to the devastating impact corruption has had on the environment. Corruption in a state is a failure of the state, deprivation of prosperity, and a step toward an unstable nation for long.