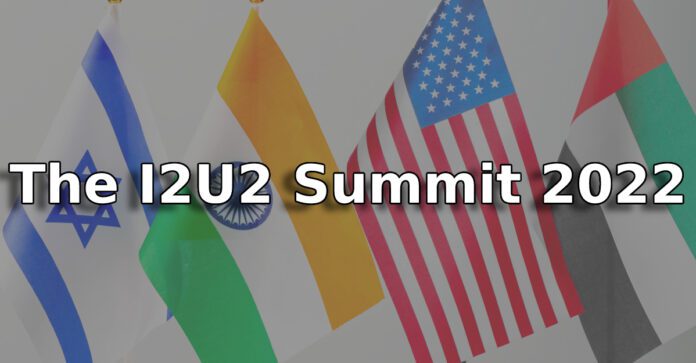 The eyes saw another quadruple coalition between the Asian and Western regions to meet the national interests and enhance cooperation. The I2U2 Summit has created a bi-regional bloc of countries that once had bad blood between them and were not ready to cooperate. This alliance of interests tied three regions together on the 14th of July 2022 in a virtual meeting. This maiden I2U2 Summit developed a triangle by connecting South Asia and the Middle East (West Asia) with the United States of America.

What is the I2U2 Summit?

The meeting was named I2U2 because of the 4 member states. 2 I consist of ‘India’ and ‘Israel’ whereas, 2 U depict ‘the UAE’ and ‘The USA’. Some have also termed it the ‘Asia-Pacific’ alliance. According to the reports, the meeting between the four countries convened in October 2021 when the foreign ministers of the concerned states met virtually. Then this grouping was named International Forum for Economic Cooperation.

Summit is a bilateral or multilateral agreement that is signed by the head of the state in a meeting. Indian prime minister, Narendra Modi, US President Joe Biden, Israeli PM Yair Lapid, and UAE President Mohammed bin Zayed Al Nahyan met virtually for the first time on 14th July 2022. They met to enhance regional cooperation through initiating a joint economic venture. The leaders discussed the ideas to bolster the economic outcome.

The Ministry of external affairs (MEA) of India released a press two days before the commencement of this virtual summit. The press reports that the quad countries in the first I2U2 summit would encourage cooperation in 6 important matters such as water, energy, transportation, space, health, and food security.

Moreover, it unveils that “each country has Sherpa-level interactions regularly to discuss the possible areas of cooperation”. This means adding to 6 substances other matters where cooperation is likely would also be added to the list.

Furthermore, the intention to include the private sector to the build cooperative relations is also expressed. The private business sector would help to establish modern infrastructure for industries that work on low carbon utility and also develop green technology.

Cooperation of the Quad Countries of the I2U2 Summit

Contrary to the nature of the Indo-pacific alliance which includes India, Australia, Japan, and the United States the cooperative nature of the Asia-West Alliance is economic. Indo-pacific group is overt about strategic collaboration. The history for bolstering the financial relationship lies in the emergence of the Abraham Accords. These agreements explain the normalization of friendly relations of Middle Eastern countries with Israel. Biden’s administration followed the suit of its predecessor in the office and tried to reestablish its relation with India and the Middle East.

According to an analysis drawn by Foreign Policy Magazine, the thematic focus of this I2U2 summit was 3S-sustainability, strategy, and substance.

India to cooperate with Israel, US and UAE

Not just Washington but after Abraham’s pact, Israel also needed allies to expand its geographical impact. Nobody ever thought of the formation of a new bloc consisting of these states of I2U2. In Southeast Asia, a power bipolarity is yet to be established in the form of China vs. India. Both are in search of maintaining their autonomy and power bulk with the help of strategically important countries.

PM Narendra Modi’s foreign policy has based on the idea of expansionism. New Delhi has developed good foreign relations with Saudi Arabia and now with UAE and Israel. This step is self-explanatory in terms of strategic importance and energy safety.

Thus, this I2U2 summit is proof that the world is moving fast from conventional warfare to economic warfare. And the countries are struggling to maximize their holding capacity for a big chunk of the world resources. The six matters enlisted for cooperation in the agenda of the I2U2 meeting are the basic resources on which human life depends. Projects like these groupings and Belt and Road initiatives are strategies for gaining power autonomy.