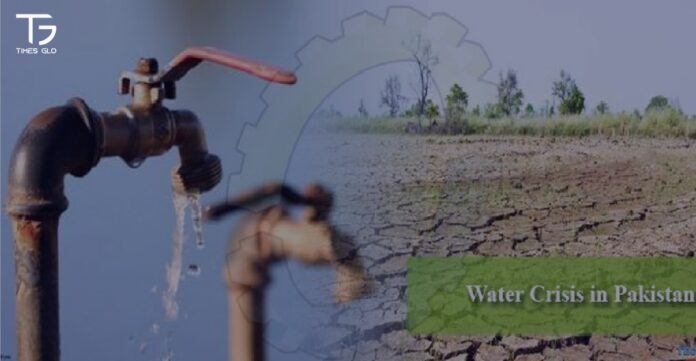 There are various  factors that have contributed to the water crisis in Pakistan, such as an increase in population in urban areas, agriculture, overpopulation and mismanagement.

Since the turn of millennium there has been a huge outcry about water shortage and access to clean drinking water. A lot of resources and time is being invested in scientific missions to discover water on other planets. The desperation to find more sources of water accentuates the necessity of water in human life. Water is a very vital source of life. As science discovered that life on Earth began in water and kept evolving in the water. After 3 billion years life came on earth. Though life was able to maintain itself outside water but it remained an essential part for it. Humans made a lot of progress but we are still dependent on water. Water makes70 of the body and it is the most abundant molecule which exists within our body. Not only humans but every living organism needs water to sustain life. Without water life is impossible. A person can survive without food for forty days but he will barely survive a week without water, such is the requirement of water for the human body.

Water is the hallmark of modern civilization. Besides biological requirements, water is an important need of the domestic, public and economic spheres of a society. With the wake of capitalism, water made its way into the political sphere as well. Oceans are gateway s for transporting commodities and people from one place to another. Countries with warm waters are considered to have the advantage of their strategic locations. Great wars have been fought to gain access to warm waters. For instance, it is a widely held belief in academia and policy making that Soviet Union attacked Afghanistan to access warm waters (1993)[1].

It is explicit that we need to change the way we use water. There is fundamentally everything wrong with the way this precious resource is being used and climate change, water pollution, water borne diseases and water scarcity are the pointers towards the intricacy of the issue.

Pakistan ranks 37 among the countries which have acute water stress which include corrosion of fresh water means. The quality and quantity both are worsening day by day. According to the recent categorization of The World Water Resource Institute, Pakistan will face extreme water stress issues if it does not take necessary measures. Pakistan has also been listed among top 10 countries where most of the population does not have access to safe drinking water. In the developing world, the ratio of people suffering from water-borne diseases is comparatively high. Six out of ten major diseases are caused by contaminated water and sanitation problems. Diarrhea, Hookworm Schistosomiasis, Ascaris, and Dracunculiasis, mainly caused by infectious and viral pathogens contaminating water and food lead to morbidity, disability and can also cause death. Another very serious water-borne disease is Trachoma—caused by a bacterium and leads to blindness. According to WHO’s 2019 report on drinking water approximately 829 000 people in which 297 000 are children under the age of 5 years die every year due to diarrhea. The cause of diarrhea is contaminated drinking-water, and unhygienic surroundings. Although diarrhea is a disease which can be easily prevented, children and adults could be saved if the risk factor is eliminated. Waterborne diseases are primarily being spread through the contaminated water usually through the excretion of animals and humans. Both humans and animals can be victims of the disease or could be carriers. Using contaminated water for cooking, washing, bathing or even inhaling its drops can cause a severe kind of infection in the human body. A normal person having 6o kg weight must consume at least 2 liters’ water daily. This is the standard ratio to measure exposure to contaminated water and the possible harm and intensity of this exposure. Although water consumption rate varies from person to person.

Agriculture was the main source of Pakistan’s revenue generation. Now Pakistan is facing a serious agricultural crisis as we are unable to produce the required food due to the scarcity of water. Only if climate change didn’t reduce the ratio of rainfall and global warming had not started melting glaciers would we be able to grow and export food at a massive level. As Khan and Javed argue in their study, accessibility of basic needs such as water can solve many other socio-economic problems of a developing and striving country. Good health means more energy for work, a strong labor force and less expenditure on health.

Lerebours in his study on use of water in villages of Pakistan found that 50% of village population gets drinking water from hand-pumps and also a great number of rural and urban population gets groundwater through municipal water supply means (2017). His subject city was Saline and he found that the main source of municipal water in Saline is irrigation canals and groundwater.

The fundamental problem lies in the fact that there is poor resource management of water use. When we take water either from groundwater sources, sea or rivers we almost disturb the hydrological cycle.  Building dams, canals and levees disturbs the natural movement of water on, above and below the earth. When we use this water for household it gets contaminated by cleaning chemicals, plastic micro beads and cooking products. Very often these impurities remain intact even after natural filtration process. Also, industrial and agricultural wastewater can contain chemicals used in industries and pesticides and fertilizers. This contaminated water not only destroy underground sources of water but also spoils habitus of sea life, change temperature and salinity level of water. So what we take fresh and pure water from nature but in return we give it poisonous and contaminated water which is beyond natural treatment.

The only solution to overcome water crisis is keeping in consideration the climate change and global warming. If we could control the consumption and mindless commodity production, we can surely save some water for our next few generations. Firstly, we will have to control global warming and its triggers such as air pollution causes by hazardous gases. Secondly, we have to reduce the massive consumption of water at industrial level. We also need to use water wisely at domestic level.

sadia
Sadia is a teacher and writer. Her major is English Literature. She is passionate about reading and writing. Her ultimate goal is living in mountains with plenty of time to read and write and having friends around to discuss obscure philosophies and giving not-much needed critiques.