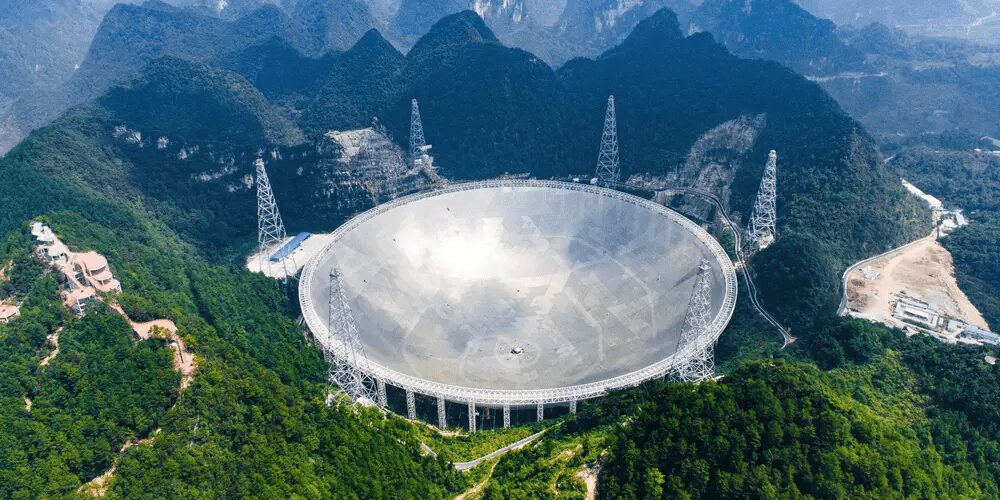 According to a recently released study by Chinese experts. Their giant “Sky Eye China” observatory may have detected trace signals from a distant alien civilization.

According to a report that appeared in Science and Technology Daily, the official newspaper of China’s Ministry of Science and Technology, astronomers at Beijing Normal University found “several cases of possible technological traces and extraterrestrial civilizations from outside the Earth.”

The signals were captured by the largest radio telescope in the world. China’s Five-hundred-meter Aperture Spherical Radio Telescope (FAST), also known as “Sky Eye.” In 2019, Sky Eye China was used to survey deep space for radio signals that might reveal extraterrestrial life.

In 2020, the researchers reported they discovered two suspicious narrow-band, possibly artificial radio transmissions while filtering through this data. Then, in 2022, another odd narrow-band radio signal was discovered, increasing the total to three. This was the result of a focused study of known exoplanets.

The signals could have been created by extraterrestrial technology. Since narrow-band radio waves are generally only employed by human aircraft and satellites. The researchers note that their findings are preliminary and should only be acted upon after a thorough investigation.

Zhang Tongia, lead scientist at the China Extraterrestrial Civilization Research Group at Beijing Normal University. Told the Science and Technology Daily that the team is currently working on an additional inquiry into narrow-band electromagnetic transmissions.

The likelihood that the suspicious signal is radio interference is likewise very high. This possibility needs to be validated and ruled out further. The report swiftly gained popularity on China social media platform Weibo after it was released and was picked up by a number of other state-run media sites. It’s unknown why it was suddenly deleted.

The signals are not the first time that radio waves from deep space have perplexed astronomers. In August 1977, the Big Ear telescope at Ohio State University detected an extraordinarily powerful, minute-long electromagnetic burst. That blazed at a frequency that researchers believed might be used by extraterrestrial civilizations.

Jerry Ehman, a researcher using the telescope that evening, quickly wrote “Wow!” on the sheet after detecting the signal on a data printout. And giving the observation its well-known moniker.

The signal may have originated from a sun-like star in the constellation Sagittarius. However, subsequent searches in the same area of space have all come up empty-handed. However, the origin of the signal is still unknown.

Radio interference has infamously hampered alien-hunting scientists in the recent past, Chinese astronomers are eager to rule it out. A signal from Proxima Centauri. The closest star system to our sun and the location of at least one potentially habitable planet was seen by astronomers in 2019.

The signal was a narrow-band radio wave generally found in man-made artifacts. Scientists entertained the intriguing idea that it might have originated from alien contact technology. Live Science previously reported that the signal most likely originated from broken human technology, according to investigations published two years later.

Similar to the other famous set of signals thought to have originated from alien contact. Signals detected between 2011 and 2014 were later found to be the result of scientists microwaving their lunches.

In order to definitively exclude any radio interference and gather as much information as they can about the odd signals, Tonji has said that his team intends to make repeated observations of them.

According to Zhang, the Science and Technology Daily, “We anticipate that the [FAST telescope] will be the first to identify and prove the existence of extraterrestrial civilizations.”

The Fermi Paradox, or the apparent lack of sentient life outside of Earth, is a contradiction between the size and age of the universe. The paradox is named after Enrico Fermi, a Nobel Prize-winning scientist, who is credited with posing the famous question “So where is everybody?” during a lunchtime digression.

The hunt for alien technology:

Since the 1960s, when American astronomer Frank Drake used the 26-meter Tatel telescope to look for indications of technology in two neighbouring Sun-like stars, searches for technological signatures have been ongoing.

Techno signature searches have greatly improved in rigour and sensitivity over time. A billion times more radio spectrum can be processed by FAST’s equipment than Drake’s experiment could. Despite these developments, humans have yet to discover any proof of extraterrestrial life.

Massive volumes of data are combed through by FAST. A cluster of powerful computers, which receives 38 billion samples every second from the telescope, produces incredibly detailed maps of the incoming radio signals. Then, signals that resemble techno signatures are sought out on these charts.

FAST is able to detect exceedingly low signals thanks to its wide collecting area. Compared to Australia’s Murri yang telescope at the Parkes Radio Observatory, it is around 20 times more sensitive. A transmitter on a nearby exoplanet with an output strength comparable to radar systems on Earth may be easily detected by FAST.

According to Zhang, China’s Sky Eye is the largest radio telescope in the world, the most sensitive in the low-frequency radio band, and is essential to the hunt for extraterrestrial civilizations.

The researchers also issued a warning, pointing out that further research is necessary to rule out the possibility that the odd signals are due to radio interference.