Draconian Restrictions and Violence in Afghanistan 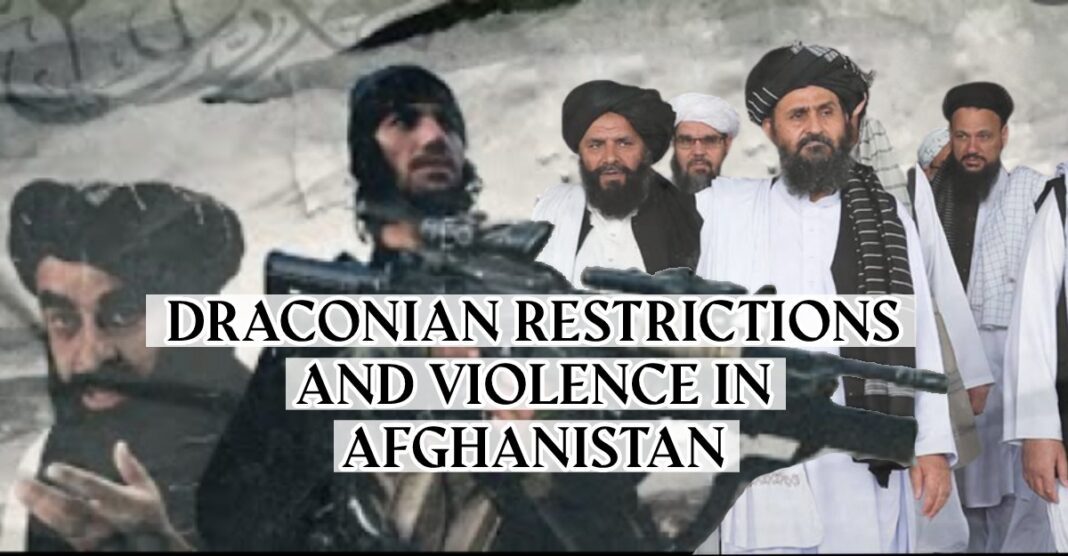 They have imposed draconian restrictions to create panic and terror among people. Requisitioning control over Afghanistan a year ago, the Taliban mounted a sustained attack on human rights. Amnesty International in a news briefing that the Taliban are persecuting minority groups, violently clamping down on peaceful protests, and suppressing women’s rights to spread fear among Afghans.

Violence in Afghanistan has been widespread during this one year, including impunity for crimes such as torture, revenge killings, and forced evictions of opponents of the Taliban. The Taliban’s government initially promised to uphold women’s rights, press freedom, and an amnesty for government officials.

“A year ago, the Taliban made public commitments to protect and promote human rights. Yet the speed with which they are dismantling 20 years of human rights gains is staggering. Any hopes of change have quickly evaporated as the Taliban seek to govern through violent repression with full impunity. To prevent Afghanistan’s human rights crisis from spiralling further, the international community must take meaningful action to hold the Taliban accountable for these crimes. “

Article related to this topic: The Post-US withdrawal Afghanistan: What next for the region?

Suppression of Freedom of Speech

The Taliban’s government’s suppression of freedom of expression has targeted human rights defenders and civil society activists. Many are getting harassed, threatened, detained and killed.

Imposing draconian restrictions and the use of excessive force by the Taliban’s security forces as they try to police a ban on peaceful protests. Peaceful protests by the people are dispel by beating and shooting unarmed protesters.

One of the protestors from Herat province spoke about the injuries inflicted by security forces:

“I saw one man lying in a pool of blood in a ditch in the street. I believe he had been killed… My hand was fractured but I didn’t go to the hospital, fearing that I could be arrested for participating in the protests.”

Since the Taliban has come into power, there have been many reports regarding Taliban soldiers beating and torturing Afghans. Many civilians were unlawfully incarcerator. They were also beaten with rifle butts.

One of the female Protestor told Amnesty International:

“There was no court, no charges, and no due process; we were abducted from the streets, kept in a private jail for several days during which we had no access to our family, lawyer, or any other official.”

There have been hundreds of revenge killings, extra-judicial killings, with bodies found with gunshot wounds . Many people have disappeared because of their work under the previous government. They are under the suspect of the involvement in resistance against the Taliban.

A person named Jalal had served in the Afghan National Defence Security Forces (ANDSF). Despite of getting a “pardon letter” from the Taliban, he was taken away to an undisclosed location by the Taliban. His family was getting threats by local head of intelligence.

In the time since the Taliban’s government came into power, there are reports of non-Pashtun Afghans forcibly getting evicting from their homes and farms. The Taliban are also doing this with the purpose of rewarding their followers with the land taken over from these people. By June 2022,  820,000 Afghans internally displaced.

The rule of the Taliban government has subjected women to increasing violence. Many women were arrested and tortured for holding peaceful protests demanding their rights. Two armed Taliban shot the wife of a former member of the Afghan security forces. The Taliban forbids girls above grade six to attend school.

When the Taliban took power last August, many expected they would reprise the draconian governance of their 1990s emirate. But the Taliban reinstated many of their harshest policies, including pushing women out of public life and brooking no dissent. Since their takeover, they have only offered vague insistences that they will rule following “Islamic law and Afghan values.”

Within a week after taking over the power they announced “interim” appointees for all but one ministry under the structure of the previous government. All acting ministers were senior leaders within the Taliban. Though their methods have varied and continually evolving, the Taliban’s government intent has been consistent: to establish uncontested and unquestioned authority over Afghanistan’s state and society.

“We must not just stand on the sidelines, watching as the human rights of a whole population collapse. A firm, meaningful, and united international response is the only hope of ending the nightmare that Afghans have endured for a year now.