Is Afghanistan the Graveyard of Empires ? 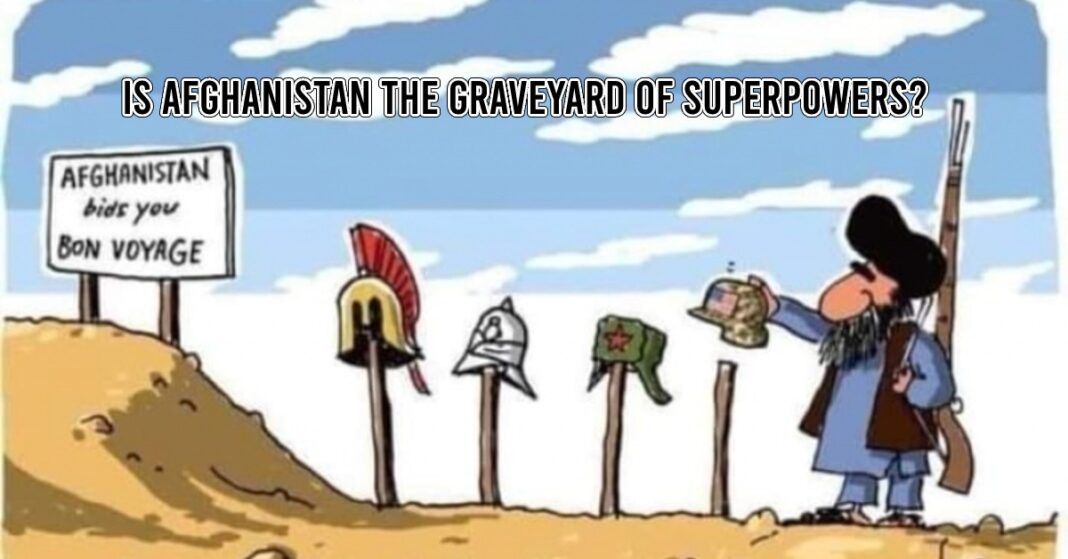 Afghanistan is the graveyard of empires. With its significant geopolitical and strategic location, it serves as a gateway between the highly resourceful and landlocked Central Asian countries.

The economically important South Asia, with its warm-water international seaports for trade, has always been at the focal point of conflict, war, instability, and bloodshed for most of its history.

Still, it has managed to wreak havoc on the prevailing hegemons of the 19th and 20th centuries, making Afghanistan a graveyard of empires and one of the most difficult battlefields for any foreign power to come out of victorious.

“Afghanistan is one of the world’s greatest caldrons,”

Said James Michener, an American author, and rightfully so, as no superpower till date has been able to attack and conquer the Afghani soil.

Due to the prevalent political and tribal instability and the acute geographic location, Afghanistan has been a host to wars and crises that require resistance, strength, and valor.

The paper aims to dissect the underlying and primary reasons for the failure of the big names, starting from Great Britain (1839–1919) to the Soviet Union (1979–89) and, most recently, the United States of America (2001–2021), along with the causes of the robustness and resilience of the Afghan natives.

The paper also aims to verify whether Afghanistan is actually a battleground impossible to conquer or not. Secondary sources like articles, journals, newspapers, research papers, books, etc. have been used to gather information for the research.

The paper concludes that the claim always associated with Afghanistan is legitimate and that it is evident that Afghanistan is, in a true sense, a graveyard of empires.

Underlying Reasons for the Failure of the West

Each giant’s failure on Afghani soil could have been caused by a number of strategic mistakes and poor planning on the part of the invading party. However, there are a few things that have caused trouble for each state in the same way.

The Topography and Climatology of Afghanistan

Extreme weather conditions (both in summer and winter), which Americans and Europeans were not built for.

The extensive mountain ranges (Hindu Kush range in the South and Pamir Knot in the East) and barren deserts. These set up a good trap for the Mujahideen and Taliban, who were not familiar with the foreigners.

The infrastructure deficit, which slowed the flow of logistics, all added to the underlying grounds for the poor performance of the advanced military regimes in Afghanistan. This claim has also been validated by Patrick Porter, who has been serving as a Defence Studies lecturer at KCL.

“The geography is very hard. It is a country of mountains and deserts, with quite severe winters, and that makes it difficult not only to fight but also to operate logistically. It limits your mobility, and it is difficult to project power. “

Afghanistan a Plethora of Tribes

One of the most striking as well as the most problematic (which makes it hard to govern there) features of Afghanistan has been its tribal ethnicity.

Due to ancient inter-tribal conflicts and invasions, each tribe and settlement has been rendered as a fort. The natives of such tribes have known and fought countless wars and skirmishes and their brought up has been that of a fighter and soldier.

The Afghan Mujahideen and Taliban were able to hold their own against the modern and well-trained military because these traits—courage, tenacity, and unwillingness to surrender—were engraved in their bones and flesh.

One of the most underestimated and less acknowledged reasons for the Soviet and NATO’s (US) failure in Afghanistan was the inclusion of the concept of Jihad in the resistance.

Afghanistan, being a traditional and conservative country and its tribes being an embodiment of Shariah, protected their religion (Protection of Muslims’ freedom against oppressors) and territory (self-defense) against the occupying states (Non-Muslims) in the Holy War.

For a Muslim, the concept of sacrificing one’s life and property under the command of religion and the Almighty Allah is the most prestigious service one could offer.

The combination of a military fight with the desire to attain Shahadat enhances a Muslim’s spirit and zeal by a factor of one million. This abstract feature might not be very appealing to researchers or strategists, but the strength and energy derived from religion is also non-negligible.

The Jihad concept, which emerged during the Soviet invasion, also called for Muslim fighters and soldiers to come from across the world to Afghanistan to support their Muslim brethren (Mujahideen), further leading to the emergence of the Taliban, and the phenomenon continued throughout the US-led NATO invasion.

Neighboring aid, whether military, economic, diplomatic, or abstract, also contributed to the West’s failure. During the Soviet-Afghan conflict, the US, China, Pakistan, and Iran supported and helped the Mujahideen for their own objectives.

The CIA (U.S.) and ISI (Pakistan) were keys to Russia’s loss. The ISI educated, equipped, and armed the Afghan Mujahideen using American resources, giving them incredible resistance against the Red Army.

When a US-led NATO army chose to confront the Taliban in 2001, the ISI supported the Pashtun Mujahideen (Taliban). This choice may have been a short- and long-term blow to Pakistani society and economy, but a Pakistan-friendly administration in the West was necessary for peace on its own territory and to prevent Indian adventurism in Afghanistan.

Assisting Afghan fighters in their struggle against the Soviets weakened NATO and the U.S. in the area. Former ISI chief Hamid Gul said,

Also Read: The Post-US withdrawal Afghanistan: What next for the region?

Another huge hit for the Russians was when they deployed Central Asian (Tajiks, Uzbeks, Kyrgyz) forces to counter the Mujahideen resistance, which also backfired because they shared core religious, ethnic, and cultural values, and after initial operations, the element of sympathy and religion (Jihad) arose to the horizon and the Central Asian armies stopped fighting against the Afghans (anti-militarism).

With fifth-generation warfare on the rise, the fighting mode has shifted from linear to more complex and complicated. Guerrilla tactics, where it is nearly impossible for state agencies to pinpoint the original source of terrorism and compel them to punishment.

This is what happened with the KGB of the Soviet Union and the CIA of the United States in Afghanistan, which eventually became the graveyard of empires. Due to the excellence of the Afghan mujahideen in guerrilla warfare, sleeper cells, financing groups through third parties and MNCs, a convoluted geographic map, and isolated villages separated by mountains and deserts.

It became easy for guerrilla insurgents to carry out the tasks and then hide in plain sight in those villages where foreign accessibility was almost unfeasible.

One of the most foolish acts committed by Britain, the US, and the Soviet Union was their miscalculation and underestimation of the threat of toil in the Afghan landscape and the robustness of its people, as “meager” and easily handle-able.

Plus, the overestimation of and excessive dependency upon the power and capability of the Afghan government and armed forces, whose influence and authority was practically nil across the walls of Kabul, was good for nothing, and their poor training, along with the logistics and communications disruption, led to their rack and ruin.

Is Afghanistan the Graveyard of Empires ?

Afghanistan, which apparently seemed like “an easy task,” became the source of humiliation and destruction for the three great giants and superpowers and became the graveyard of empires.

Whether it was the religious, political, economic, or cultural factors behind Afghanistan’s successful insurgence or the deadlock of the big guns.

What matters is that Afghanistan and its natives continue to strive, survive, and suppress foreign interventions till date when the last US and NATO troops are evacuating the area.

Further consolidating, and legitimizing the claim that Afghanistan is truly the graveyard of big powers. As Babur, the founder of the Mughal Dynasty also said,

“Afghanistan has not been and never will be conquered and will never surrender to anyone.”