Pakistan and US bloc during the Soviet Invasion of Afghanistan 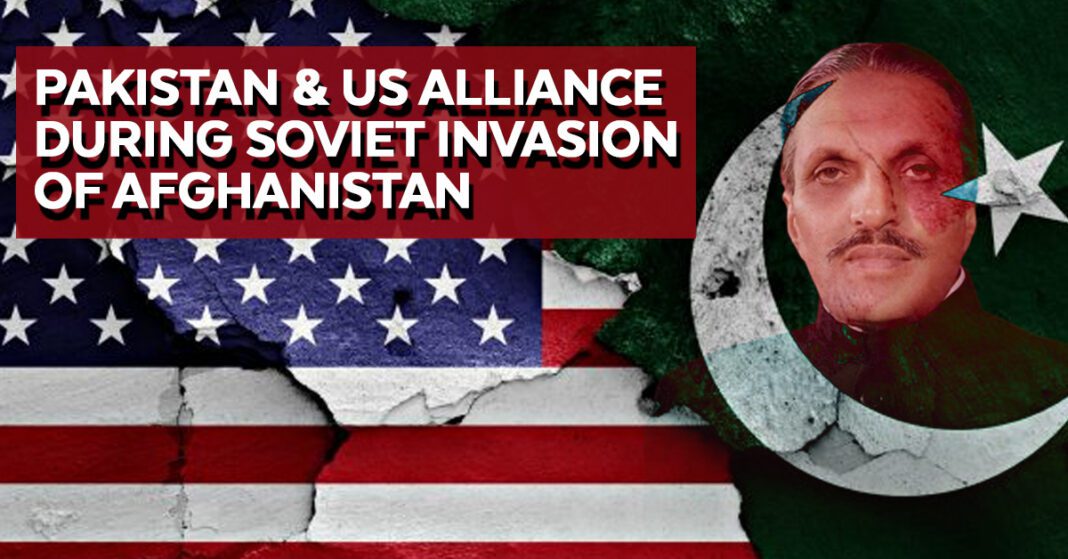 The Soviet invasion of Afghanistan (1979) was an actual event on the international scene, not just for the Soviet Union and Afghanistan but also for the United States for two reasons. The Communist Domino Theory was the main reason for the Cold War. Second, the fall of the Shah of Iran made the United States rethink its role in the area.

Suddenly, this area became very important to US foreign policy. The United States needed a dependable and reliable ally in the region to execute its sinister ideas. Nobody could serve US interests in the area better than Pakistan could. The United States and Pakistan have never had a balanced relationship in their alliances.

The US bloc always gains the most through its partnership with Pakistan, and Pak always has to face the consequences. Whether it be the Cold War alliance or the War on Terror alliance. Pakistan has always been on the side where costs are higher than benefits.

Pakistan and the US Alliance

The United States of America relied on Pakistan whenever it was convenient for them, but they stopped doing so when their needs were met. But this time, Pakistan made full use of its alliance with the US. Through wise decisions, we reaped many decisive advantages from this partnership.

Before conducting an analysis of Pakistan’s choice to stand with the US bloc, it is necessary to first assess the international context that pertains to Pakistan. Pakistan’s relationship with the United States has deteriorated. Its foreign policy was fragile. Security threats from India were at hand.

The efforts that Pakistan was making to create a nuclear power program were roundly criticized at all times. Its economy was unstable, and its military and infrastructure were based on traditional patterns. As a result, Pakistan desperately needed a bang from hegemonic support to lift its game. The Soviet Invasion of Afghanistan gave Pakistan a golden opportunity to revive itself and re-establish its importance to the US. This time, not as a puppet but as a partner on equal terms, which Pakistan eventually did.

US Policies over Pakistan’s Nuclear Program

Acquiring the prestige that comes with nuclear power is, without a doubt and by a wide margin, Pakistan’s most astounding accomplishment to date. At the same time, the US has been bashing Pakistan’s efforts to go nuclear by pressuring the government to abandon the Pak-France deal (1976). Also threatened to destabilize Pakistan’s government (during Bhutto’s reign) by imposing aid embargos upon Pakistan.

The US changed its policies fortnightly to accommodate Pakistan’s nuclear program. Even to the extent of making an amendment to its own constitution, i.e., the Symington Amendment. Pakistan’s leaders took advantage of this policy change and sped up the project twice.

In 1984, Pakistan had nuclear weapons, which they tested in 1999, in such a short amount of time. The resumption of US-Pakistan relations has deteriorated. Since the US abandoned Pakistan during the 1965-1971 wars and Pakistan left the SEATO-CENTO treaties.

Pakistan and the US Bilateral Programs

In the wake of the Afghan invasion, the United States extended its hand of cooperation toward Pakistan, and Pakistan welcomed this approach.

Carter and Zia came to a one-on-one relationship, with Carter reviving its policy of ignorance towards Pakistan into an engagement policy. Different bilateral programs were initiated, and Pakistan gained the US as its ally back again. Pakistan, ever wanting to modernize it’s military (due to the Indian threat and after the fall of Dhaka).

The economy got its opportunity in 1979 when the US lifted an economic aid embargo on Pakistan. Military cooperation between the two countries benefited Pakistan very much.

In 1985, Pakistan became the 4th largest recipient of US bilateral military assistance. This economic and military aid of $7.4 billion modernized Pakistan’s defense and communication systems by providing conventional and non-conventional weapons and security systems. With financial aid, Pakistan’s economic growth was boosted, and its currency deficit was bridged.

Another principal advantage Pakistan gained by supporting the Afghan Jihad was the setting up of a Pak-friendly government in its immediate neighborhood, the dissolution of anti-Pak and Pukhtoonistan sentiments, and the official recognition of the Durand Line by President Karamatullah Moosa Qazi in 1989.

Consequences of Siding with the US bloc

Pakistan has achieved many enormous breakthroughs at the state level but has lost much. Siding with the US bloc gave Pakistan an aggressive enemy in the form of the Soviet Union. The Soviet regime exploited Baloch separatist movements to create inter-state violence to shame the Zia government.

They conducted airstrikes throughout the Afghan invasion and are even speculated to have been involved in Zia’s assassination. This partnership provided Zia with US backing and legitimacy, and he continued to enforce a non-democratic system, which made Pakistan suffer a lot in the long run.

Another disgraceful consequence was the shaming of the army’s repute by the revelation made by the CIA report. That authorities inside Pakistan’s military were complicit in the theft of American weaponry and subsequent sale of those guns on the underground and grey markets.

The Coalition of the CIA and General Muhammad Zia-ul-Haq

In coalition with the CIA, Zia used religion for their vested interests. The US promoted Islam as a way to counter communism, and Zia introduced the Islamization of institutions to legalize his dictatorial rule among the masses.

It was these policies of Zia which infused the poison of religious injustice, fanaticism, and bigotry and the feeling of sect against sect, which have ignited events of sectarian and ethnic killings ever since.

This partnership decision also proved to be the root cause of many inter-state issues which Pakistan is dealing with to date. Amongst them, the rehabilitation of 3.5 million Afghan refugees and the baggage of their issues stand at the top.

Impact on Society Due to the Afghan Refugees

Deforestation, floods, and landslides are on the rise due to the wild grazing of the millions of cattle brought by migrants. As a result of the high number of jobless Afghans, there has been an upsurge in petty crimes like robberies, snatchings, kidnappings, and ransom demands. There is an increase in feelings of hatred and enmity among the locals because of the influx of refugees.

An Article Related to this Topic: Afghan Refugees in Pakistan

Goods, from tea to furniture to crockery to electronics, automobiles, and weapons. Even opium, heroin, hashish, and other kinds of drugs, were smuggled cross-border during and after the Afghan war. Inflicting economic losses of millions of rupees on the government of Pakistan and the exchequer, as well as the social and societal loss of our young succumbing to the plague of drug addiction, which can still be seen today.

Pakistan’s participation in the Afghan Jihad as a US extension made it an essential country for making, smuggling, and using drugs in the region. It also resulted in the establishment of an unofficial arms industry at Darra Adam Khel. Which specializes in modern weapons and poses a severe threat to national security.

After analyzing both sides of the picture, one can ask himself, “Was it the right decision?” Yes, given the national and international context. It was the right decision to side with the US and maximize one’s gains (and that, too, of momentous importance). Concerning the costs Pakistan had to bear, I believe they resulted from administrative, political, and institutional failure rather than consequences.

Whatever benefits Pakistan received as a result of this relationship could not have been accomplished via any other means. It could have coped with the issues through better management and planning. Which it could not, and we, as a nation, are still paying the price for it.