Pakistan:  protests by families of the disappeared met with intimidation, harassment, and violence 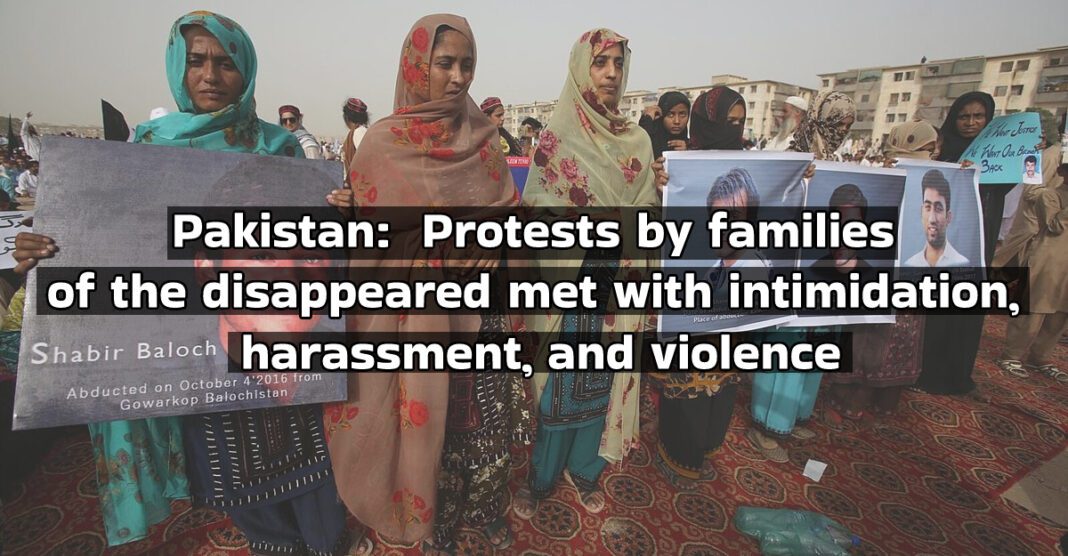 Pakistan is a democratic state that provides and protects the fundamental rights of its citizens. The state is under the obligation to safeguard the rights to life, liberty, and dignity of every person. The constitution of Pakistan of 1973 has a separate chapter on fundamental rights.

This chapter protects the right to assembly and association under articles 16 and 17. Which gives the right to protest to citizens. Not just constitutional provisions but also the national legislation and international instrument of human rights ratified by Pakistan also protect this right to protest.

These statutory provisions also protect the protests by families of the disappeared. However, they talk about peaceful protest only.

Legal framework on protests by families

Constitutional provisions on right to protest

The constitution of 1973 under article 16 specifically renders the right to “assemble peacefully and without arms, subject to any reasonable restrictions imposed by law in the interest of public order.” The section delivers a positive right to the citizens. But also implicates a reciprocal responsibility on the state to impose reasonable restrictions. The state does this to protect the public order in the case.

“A peaceful protest is a constitutionally protected right. This right stems from the fundamental rights of freedom of assembly, freedom of association, and freedom of speech/expression, which are written under Articles 16, 17, and 19 of the constitution respectively. No law-abiding citizen can be denied the right to protest.”

Hence, the judgment of IHC justifies the legitimacy of the protests by families of disappeared persons.

Pakistan has a plethora of legal provisions that deal with the right to protest of the citizens. Pakistan Penal Code 1860, Code of Criminal Procedure 1898, Maintenance of Public Order 1960, and the Police Order 2002.

These laws have provisions that protect and talk about the peaceful protest that including protests by families. Also, they have remedial provisions in case of a grave situation of law and order during a protest or peaceful assembly.

International law on the right to protest

Pakistan has ratified the human rights convention of the United Nations called the International Covenant on Civil and Political Rights (ICCPR) of 1966. Its article 21 extends the right to peaceful protest to the general public. And there is no restriction on this right unless there is a threat to public security.

Moreover, the first optional protocol of ICCPR gives the right to the citizens to file a complaint to the Human Rights Committee in case of violation of the said right by the state. But Pakistan is not a party to the optional protocol.

What does the law say about forced disappearance?

Law prohibits enforced disappearances, wrongful arrest, illegal detention, and unlawful confinement. Article 10 of the constitution of 1973 protects the citizens from arrest and detentions.

And to arrest a person he or she needs to know the charge against them. This means you cannot abduct someone forcefully from their residence or workplace without telling them what wrong they have committed.

Even if you arrest someone their right to consult a legal advisor or lawyer remains intact.

United Nations Office of the High Commissioner on Human Rights (OHCHR) has developed a proper framework of laws that deal with human rights. It has also adopted a convention that talks against forced disappearances named the International Convention for the Protection of All Persons from Enforced Disappearance (CED).

Article 2 of the convention defines enforced disappearances. It provides a list that the agents of the state or the groups having support or authority from the state are mostly involved in disappearance cases. Importantly, the family is unaware of the whereabouts of the disappeared person.

It is significant to note that Pakistan is not a party to this convention and hasn’t ratified it yet.

Protests by families of disappeared met with dismay in Pakistan

You must have a clear idea now that the law allows protest and restricts forced disappearance. In Pakistan, the issue of forced disappearances of Baloch nationals has always been a matter of heated debate. Several governments came with the spirit to resolve this issue and went being a toothless tigers.

The families of victims are on the roads for justice and the release of their loved ones. These protests by families are increasing but sadly, no one is hearing their voices.

In July 2022, the Guardian reported an article listing the remarks of a Baloch protester-Sammi Deen that more than 5000 Baloch are missing and her father is one of them. Sammi reported that her father Deen Muhammad Baloch was in the hospital in 2009 when abducted and they are unaware of his whereabouts.

She revealed more about the behavior of the police officials with them while protesting. She has been protesting for 13 years and fighting for the return of her father due to which she is unable to focus on her studies.

Other events of protests by families

The saddening element is the bill on missing people went missing. The bill disappeared before presenting in the House. Furthermore, to track and follow up on the cases of missing persons the Inquiry Commission on Enforced Disappearance seems reluctant to work. However, its performance is redundant.

Another recent event of procession against this brutality of forced disappearances happened in July 2022, in Kharan, Baluchistan. Protest by the families of Aslam Mengal and Fahad Baloch took place before the Kharan Press Club and demanded their safe return home.

The families of the victims demanded that if the disappeared persons had done something unlawful bring them before the court and initiate the proper legal proceedings. It is true under article 4. That says under law everyone has equal treatment. In addition to that article 10 puts an obligation for the production of the victim before the magistrate within 24 hours.

Moreover, Amnesty international rebuked Pakistani authorities for using outrageous steps against the protest by families of disappeared people. Deputy Regional Director of Amnesty of South Asia expressed views on the atrocities. The families of the disappeared are not receiving any response from the state. Amnesty has also published the views of several protesters who shared their experiences of a police encounter and verbal abuse.

It is gut-twisting that families of Baloch missing persons are protesting for years but are unaware of their loved ones. Most of us cannot relate to their agony. They are even unaware of the living status of their relations. They are on the roads and working for their return but the number of forced disappearances is taking its toll.