Sliver of a Silver Lining 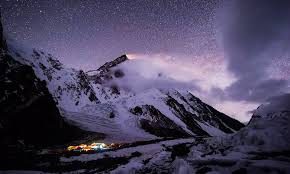 A sliver of a Silver Lining

Orophile/Orophilia; a person who loves the mountains/ the love of and for mountains, as this is intended for those, predominantly.

Unbeknownst to many, Pakistan houses five of the fourteen 8000ers, namely, K2 (Choghori), Broad Peak, Nanga Parbat, and Gasherbrum I and II; four of these five are located in the Karakoram and Nanga Parbat in the Himalayas. Because of the aforementioned, understandably, Pakistan is considered a favorite amongst the mountaineering community across the globe, both during winters and summers.

The extent is almost similar to that of Nepal with its yearly influx of mountaineers, hoping to feel what it is like at the top of the world, literally. Foreign mountaineers, more often than not, tend to hire locals (referred to as High Altitude Porters) from the regions surrounding the mountains who are incredibly aware of the tough terrain ahead and not to mention those who find acclimatization easier due to having lived in similar terrains all their life, for the purpose of finding and fixing routes, for carrying various supplies atop the mountains as well as for sustenance purposes such as cooking, etc.

Despite the inexplicably arduous work that is expected of them and despite making it possible for various, if not all, renowned foreign mountaineers, they are often lost to time with next to no recognition. An example that comes to mind is that of Amir Mahdi of Hasanabad, Hunza, who was abandoned on an icy ledge mid-summit push of K2 by the first successful summiteers of K2 (Lino Lacedelli and Achille Compagnoni) in 1954.

By force of will and the interplay of sheer luck, Mahdi survived the nightlong ordeal in -50C and returned alive, but having lost all of his toes to frostbite and his passion for mountaineering to the selfish approach of the climbers he made the summit possible for. Amir Mahdi passed away in 1999, living out his life with the scars of abandonment and unjust treatment. Sliver of a Silver Lining

Years later, the situation for Pakistani high-altitude porters hasn’t changed for the better to a great extent. As opposed to their Nepalese counterparts, who work with life insurance of at least $12000 (approximately), Pakistani High Altitude Porters are barely entitled to life insurance of $1500, if they are lucky, as per the Alpine Club of Pakistan. Fazal Ali, a three-time summiteer of K2, recounts his experience with most foreign mountaineers with the words, “But once they’ve achieved their goals, they forget everything.” The sliver of a silver lining

However, I believe one of the major reasons for the aforementioned plight of the High Altitude Porters, is the lack of recognition and resources directed towards the entirety of adventure sports and, in particular, towards the mountaineering and climbing sector. This is starkly different from that of Nepal; the state invests and allocates substantial amounts for the support of its Sherpas (Nepalese equivalent of high-altitude porters). Sliver of a Silver Lining

Mountaineering in Pakistan, to my knowledge, has only made it to the mainstream rather recently, with the news of the Nepalese Sherpa team successfully completing the first winter ascent of K2 in January 2021; and even more so, with the news of a team of Pakistanis (Muhammad Ali Sadpara, and Sajid Sadpara) working towards achieving the same winter ascent of K2 in a joint manner with a couple of foreign mountaineers (Juan Pablo Mohr, and John Snorri). Sliver of a Silver Lining

It is to be noted that Ali Sadpara too started out as a high-altitude porter, only gaining substantial international recognition after being part of the team that successfully completed the first winter summit of Nanga Parbat in 2016; his foreign teammates recounting time and again the impossibility of the summit had it not been for Sadpara. His breath of fresh air-Esque personality and his opinions such as “Aapki dillagi honi chahye paharon Kay Saath” added to his popularity abroad. Sliver of a Silver Lining

With that recognition came some semblance of international support that paved way for his being the only Pakistani having successfully summited eight out of the fourteen 8000ers, across the world. Sliver of a Silver Lining

The most recent of Sadpara’s adventures was to attempt to be the first set of Pakistanis hoisting to successfully ascend K2 in the winter (which is an arduous task in-season i.e. summers; but its arduousness multiplies manifold with it being attempted during the winter). Prior to this, Ali Sadpara hadn’t received much national support and/or recognition but the possibility of a Pakistani winter ascent had a significant percentage glued to their phones for the news. Sliver of a Silver Lining

But perhaps, it wasn’t in the cards in the manner hoped for; (it is still unclear whether Ali Sadpara successfully reached the top before meeting his demise on the mountain this winter- however, the news isn’t far away, what with the discovery of his (and his teammates’) cameras and tracking devices). Sliver of a Silver Lining

However, as heartbreaking as the situation is in its entirety, there is a possible sliver of a silver lining in there somewhere. It has gotten the people of Pakistan talking- and while that isn’t much, it is something and something, in contexts of this sort, are better than nothing. At times, igniting a debate in a certain direction does it good in the longer run. Recent Pakistani summiteers of various 8000ers (Sirbaz Khan, Abdul Joshi, to name a few) have received a relatively more defined coverage on the national level (which still is not as much as it should be). Sliver of a Silver Lining

Mountaineering groups on social media have consistently seen a rise in memberships suggesting that the people of Pakistan are increasingly growing aware of the existence of the mountaineering sector and by extension, of the arena of adventure sports. This, I hope, propels in the ebbing away of the plight of the aforementioned High Altitude Porters.

The government’s (though it could be more) instances of lending the forces as well as technology for the rescue operation(s) for Ali Sadpara (and teammates) instills in me a semblance of the belief that they (and governments of the future) might be relatively more inclined to invest in the development of our mountaineering sector, Pakistani mountaineers, and our High Altitude Porters (and their insurances, training, etc.) in a timely manner. Sliver of a Silver Lining