Pakistan’s Relations with the US under Biden 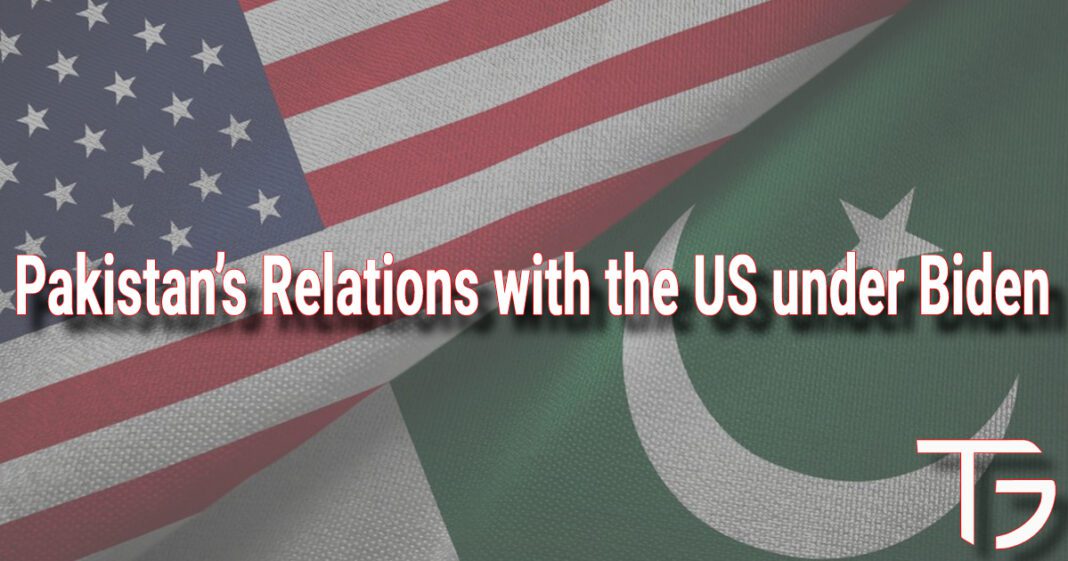 Since its inception, Pakistan and US relations were not friendly. Pakistan has adopted one-sided-pro United States (US) policies. Pakistan’s relations with the US under Biden’s presidency were mostly based on Afghanistan and the fight against terrorists. The United States shift its foreign policy under Biden’s presidency from the Middle East to the Indo-Pacific region. Pakistan is the gateway to South and Central Asia. Pakistan is the main stakeholder In South Asia’s power politics.

The US was the first country with which Pakistan maintained diplomatic relations in 1947. in 1954 and 1955, Pakistan signed South Asia Treaty Organisation and the Central Treaty Organization. Also, Pakistan adopted one-sided policies during the Cold War era and it was in the US block because the Soviet Union signed a Strategic Peace Treaty with India in 1971.

Pakistan played an important role in maintaining US-China diplomatic relations in 1970. The US grants economic aid to Pakistan and it is a major supplier of military equipment. The US is the largest exporter of Pakistan and their relations are mostly based on military and economic support. After 9/11 Pakistan and the US had cooperative relations.

Bilateral relations between Pakistan and the US were bad because of many misconceptions such as Pakistan sponsors terrorism. Since 2010 Pakistan has been playing a mediator role between the Taliban and the US and with the support of Pakistan they signed a peace deal. Pakistan has friendly relations with China. They have started CPEC and BRI projects.

That’s the reason the US has bad relations with Pakistan but on the other side, the US has good relations with India. US withdraw its troops from Afghanistan under the Biden administration so it is a defeat of the US but he blamed Pakistan Pakistan as a supporter of the Taliban. Biden has spoken to heads of state and governments but so far he has not called the Prime Minister of Pakistan.

There is a trust deficit between US and Pakistan, that increased after the Taliban take over Afghanistan. History tells us that Pakistan-US relations under the Biden’s presidency got worse. Biden did not invite Pakistan to the climate change conference. Bangladesh and India’s leaders were there but Pakistan was the only country among the world’s 10 most populous not to receive an invitation.

John Kerry Biden’s special envoy for climate change visited India and Bangladesh, but not Pakistan. Separately, Pakistan played an important role in the Afghan Peace Process. Pakistan wants good relations with the US. Foreign Minister of Pakistan said; “America has to understand that our relationship with China is not a zero-sum game for them. They should come, compete and invest”.

The Biden presidency sees Pakistan through the Afghanistan dimension. Over the last few years, Pakistan-US relations have improved during the Trump administration. The peace and reconciliation process started in Afghanistan. For decades, the US has had interest base relations with Pakistan because of America’s goals in Afghanistan. Pakistan helped the US in the war on terror. Now the US withdraw its troops from Afghanistan and the relationship is on shaky footing.

America has been blaming Pakistan supports the Taliban therefore we lost in Afghanistan. Pakistan said due to this war we lost our soldiers and we are facing Taliban insurgency in Pakistan such as (TTP). Pakistan wants geo-economics-based relations with the US. The author of No-Win War: the Paradox of US-Pakistan Relations in Afghanistan’s Shadow, said “there is a lack of hope that the relations will get better, as the things are not moving towards rapprochement between both countries.

China’s main rival in India in the region, on the other side, Pakistan has economic and strategic ties with China. As a result, under Trump’s presidency, the US moved closer to India. Biden will support India against China in the region, but unlike Trump Biden wants to maintain balanced relations between Islamabad and New Delhi. Pakistan wanted to be neutral in the competition between the US and China on the issue of the Indo-Pacific region.

The US is the largest trading partner of Pakistan. Pakistan will need to work with Biden during his presidency to increase economic relations between the two nations and have greater access to American markets. The relationship with Biden during his presidency provide Pakistan with many economic opportunities, especially if the new President restores the US-Iran nuclear deal.

This will help Pakistan to get access to Iranian gas and oil. Pakistan can not expect the new US administration to do all the work.