A Comprehensive Review of Pakistan’s Energy 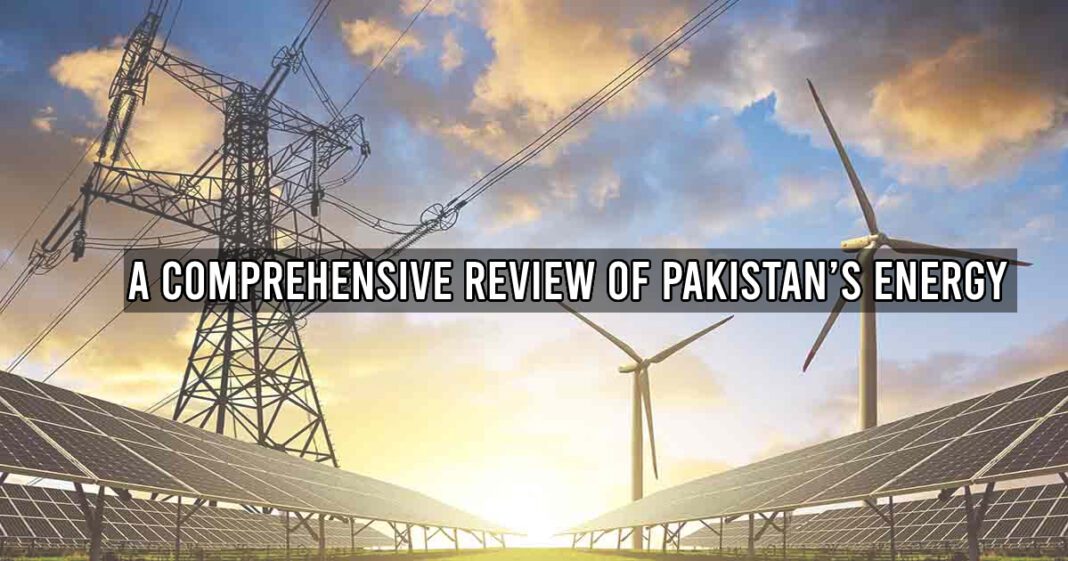 In this world, there are numerous energy resources hidden inside. Thus, the energy-rich countries can be seen to have bigger economies, and they provide most of the energy supplies to the world.

There are various examples of the above-mentioned statement, such as Iran, the CAR’s (Central Asian region), Russia, China, India, Europe, and last but not least, the U.S. is one of the energy-rich countries, be it gas, oil, or other energy resources like hydropower, wind power, solar power, and other fossil fuels.

Unwittingly, Pakistan is in the dark, even in the 21st century, due to a lack of policy and framework. However, improper distribution of power supply has led to the closure of businesses and disturbances to consumers.

According to the World Bank report (2018), up to 50 million people lack excess grid electricity, and 90 million consumers are facing power shortages. The report further cites that 1/5 of the electricity is lost due to theft and poor infrastructure.

In 2020, the overall import bill was 668.33 million USD out of the total imports of 3.31 billion USD. Pakistan needs a proper policy framework and implementation to be adopted to improve the inefficiencies.

According to the estimates, Pakistan’s energy mix is comprised of 27% hydropower, 4% renewables, and 67% fossil fuels. Whereas, if we look individually into the fossil fuel contributions, the shares of fuel oil and natural gas stand at 31.2% and 34.6%.

However, 80 per cent of the crude oil was imported, and it costs 15–16 billion USD annually. Pakistan currently has five oil refineries, which mostly run on imported crude oil.

According to the data, the oil imports in July-December (2020/21) were recorded at 4771.471 million USD. The government is looking forward to improving the deficits.

However, the PARCO is vying to invest around $5–6 billion USD to increase the oil production in Pakistan. According to the estimates, the refinery will produce around 250,000 to 300,000 barrels per day.

Simultaneously, natural gas demand is always high in Pakistan, and it contributes 38% of the country’s energy mix. A data cites Pakistan’s gas production is around 4 billion cubic feet per day (bcfd), although the demand is 6–8 bcfd.

The government of Pakistan started to import natural gas in 2015. Pakistan consumes 21 cubic feet per capita per day. According to PBS, Pakistan imported LNG worth 2.662 billion USD during June-July 2019 and 2020.

A World Bank report published in 2018 reported that 14 per cent of gas is lost in transmission and distribution, which affects directly or indirectly the sector.

Within the primary energy sources, nuclear power is one of the main components. According to the World Nuclear Association, there are almost six nuclear power plants in Pakistan, generating almost 2,332 MWe.

Meanwhile another six 1100 MW capacity plants are under construction. A report by the International Energy Agency shows that nuclear power is contributing almost 7% to the total energy mix in Pakistan.

The total coal reserves in Pakistan are estimated at around 183,975 MT.   says that the coal energy share has risen to 25% since 2019, due to the addition of the Thar coal power plant and various projects in Baluchistan. In 2019, the coal power share came to almost 2,357 gigawatt-hours.

According to the (world meter) data (2016), Pakistan has approximately 3,377,477,840 tons of coal undiscovered. The data further estimates, Pakistan has 331 years of coal in its reserves, yet the government imports coal annually.

In the below-given graph by The Global Economy, Pakistan imported almost 17,496.31 tonnes of coal in 2018, while in the past it has imported less than half of its current imports.

Besides a large chunk of energy coming from fossil fuel, Pakistan is also dependent on renewable energy. Renewable energy is the form of clean and green energy. It has been the goal of all countries to shift from dirty fossil fuels to renewables.

Thus, Pakistan has made it a goal to meet the international standards to create most of its energy from renewables. Pakistan has assured the globe, that it will shift to 60% clean energy and also 30pc of vehicles by 2030.

At the current pace, Pakistan has a 9,827 MW hydropower capacity. In 1991, hydropower accounted for around 45% of the energy capacity, which has dropped to 27%. Pakistan has installed more than 90 power projects and plants which are generating almost 10132.52 MW.

Pakistan’s Water and Development Authority (WAPDA) has veiled the capacity of 60,000 MW of hydropower potential in the country and is looking forward to working on it soon.

Pakistan has the potential to produce solar and wind power. Currently, Pakistan has installed 22 solar projects at an initial stage. They are generating 890MW of energy. The coastal region of Pakistan, which stretches up to 1000+ km, can be utilized as a great opportunity to utilize.

The World Bank has urged the government of Pakistan to expand its solar and wind power to meet at least 30% of the total energy demand by 2030. It is equivalent to up to 24,000MW. The report further explains that renewable energy can reduce environmental threats and improve energy security, and it will help Pakistan save 5 billion USD for up to the next 20 years.