Food Security and the Climate Crisis 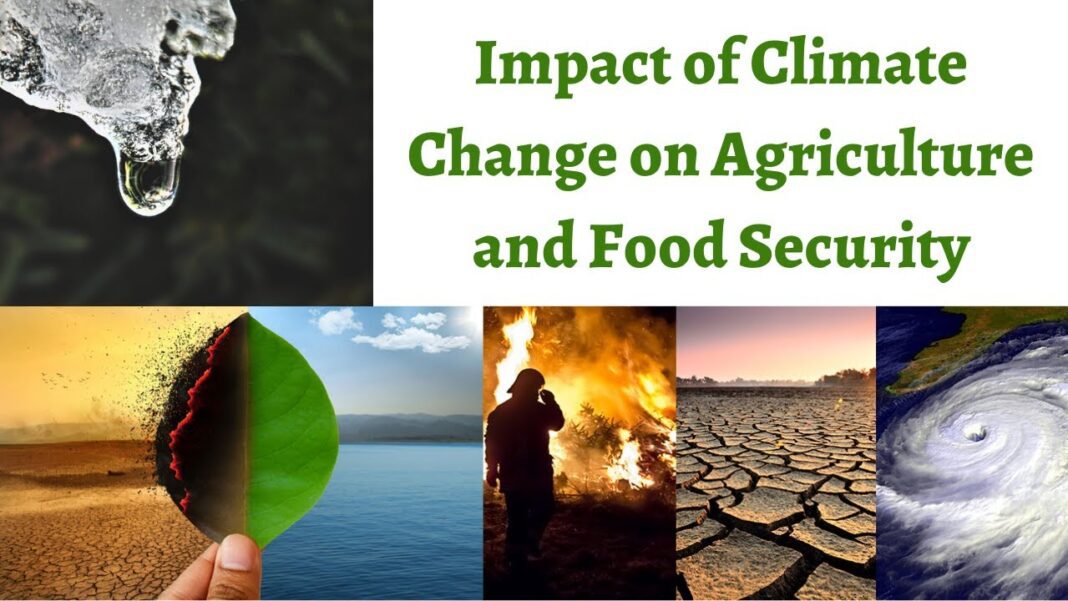 Climate change is adversely affecting water and food security around the globe. Since the inception of human civilizations, various experiments have been conducted to improve living standards. However, it required incredible human valor, genius, and effort to really transform the world. Since the 17th century, after the Industrial Revolution, the risks from climate change have drastically increased.

Climate change can be defined as a change in the weather pattern, and it relates to changes affecting land surfaces, ice sheets, and oceans.

Due to climate change, water security is affected, and changes in water cycles can be witnessed in various places around the world. Such as droughts, melting glaciers, sea-level rise, storms, and floods.

Also, the need for food security is exacerbated because of the climate change risks, the food security ensures the availability of food supply and production and well-nutritious food for all the people. Thus, the extreme weather patterns are reducing the crop yields and nutritious system, as well as exacerbating the drought, and fewer fertility conditions in the soil.

Climate change can be averted by solving food and water security issues. The WHO and FAO, with the help of governments, are supporting the affected regions around the world in mitigating the crisis and climate change.

Save Water for a Better Future

Water is one of the most essential parts of life, even though the human body is made up of 60% water. If we take a glance at history, we will find that many human civilizations choose to live by rivers or streams, like the Indus Valley Civilization which was populated near the river Indus.

Water, today, is imperative to save for a better future. Various governments and organizations have pledged to prevent water pollution and acidification. According to the UN-Water Organization, “water security is the capacity of a population to safeguard sustainable access to adequate quantities of acceptable quality water for sustaining livelihoods, human well-being, and socio-economic development, for ensuring protection against water-borne pollution and water-related disasters, and for preserving the ecosystem in a climate of peace and political stability”.

According to research, climate change has various impacts on water security, 97% of water is salty, 3% is fresh, 0.5% covers surface water, 30% is groundwater, and 70% is ice and snow. The above-mentioned facts depict the fact that the world has less freshwater while the remaining are glaciers. Amid this, polar ice is rapidly melting into the sea, which solemnly turns the fresh waters saltish.

Climate change is leading to changes in water cycles such as melting of glaciers, storms, sea-level rise, droughts, and floods. However, the melting of glaciers is a sign of precipitation and evaporation which causes more rains, and the flow of water into the rivers causes floods.

According to the UN, 5 billion people or more than half of the world’s population will be facing risk amid the water crises by 2050. Also, precipitation within the contaminated waters encourages pathogens into the fresh waters, which is causing the death of almost 3.4 million people per year, another research cites that diarrhea, a water-borne disease, is taking the lives of almost 525,000 children of age five, per year.

According to the United Nations Committee on World Food Security, “food security” is when all people have at all times physical, social, and economic access to sufficient, safe, and nutritious dietary and healthy food.

Human beings can survive without food for 8 to hardly 15 days, but imagine how difficult it would be, to feed around 7.6 billion people. Food security is also one of the most important factors since the 1970s when the concept of it originated.

In 1983, FAO did expand its concept by including that it supports “securing access by vulnerable people to available supplies. Around 1.3bn tons of food is wasted every year globally, “while 2/3 of food is wasted or lost from farms to the tables”.

Food security defines the concepts of the scientists, politicians, and policymakers who are investing their time to increase and stabilize food production due to the growing population concerns. Every human wants to eat, but due to limited resources, it has become difficult to feed each person in the world.

On the contrary, those are the rich countries where food waste is on the brink. With time, there is also a risk of low agricultural production due to climate change, and it requires urgent attention of the governments to work cumulatively and find alternatives for the future to save humanity from natural disasters.

Climate change affects food production. It has changed the system of agriculture practices. Firstly, due to the precipitation and acid rain, which affect crops. Also, the rise in temperatures is directly affecting the quality of the soil.

It is imperative to note that due to the rise in temperature, the underground water is hardly found where it used to be abandoned in the past. Livestock has also suffered a lot from climate change conditions.

Climate change has directly or indirectly affected food security, as natural disasters have disrupted “food supplies and market access.” According to FAO, due to adverse effects of the climate, food consumption patterns have been affected.

People eat fewer and fewer nutritional foods due to the scarcity of food. Food security is currently at risk and needs the attention of world leaders to avert the climate crisis and social unrest. Indeed, the fewer food supplies will end up causing more crime and problems.

According to research, 4000 gallons of water can hardly produce 2 kg of beef. One cell phone helps manufacture 240 gallons of water. Having these figures in mind, we can understand how much is needed to review the wastage of water.

The OECD predicted that water demand would rise by 55% by 2050, and the greatest demand would be from thermal electricity generation and domestic usage. And 5.7 billion people might face water scarcity for at least a month by 2050.

Solutions to Water and Food Security

Climate-resilient water management system. It supports the proactive approach to decision analysis, which says water infrastructure investment and management can help to solve the issues. This also includes both nature and green infrastructure to improve water treatment facilities.

The second is a nature-based solution. It supports the mangrove plantations, preservation of flood plains, and wetland restoration. Mangroves are the best inhalers of CO2, and they can save coastal areas from floods. Floodplains can help recharge groundwater, and wetlands can be best to increase forests.

The third is climate finance. This program encourages investors to invest in resilient water infrastructure. Global Commission on Adaptation cites that just a “200-300bn USD investment in water resources can help to reap almost 1.4tn USD in benefits, before 2030”.

It estimates around 6 percent of investment is generated to cover a large population. If investors do invest, it will protect the lives of billions of people.